Roy Chapman Andrews’ Rules for his 1920 Mongolian expedition, according to Alan Nichols of the Explorer’s Club:

– No cussing the weather.

– No grouching against the gasoline in the water.

– No profanity (except the picturesque variety).

– All male members must take share in pumping tires and other work not requiring hot air.

– If male members cannot supply fresh meat on any one day, they will not be allowed to smoke after dinner.

The Expedition and each member is required to:

– Have a thoroughly good time.

– Stop and investigate or leave the road and explore whenever desired. 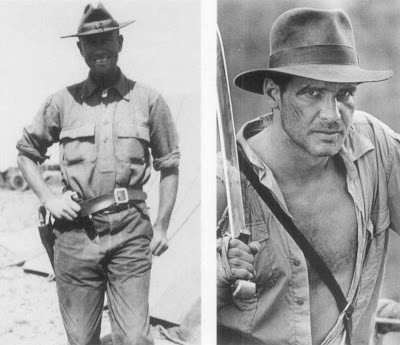 Twenty years ago B.C. (before Cass), Jim and I were newlyweds who climbed mountains, drove to neighboring states for a lunch of burgers and beers at a favorite bar, and fly-fished in cold mountain streams. We had a lot of energy, and definitely knew how to have a good time.

Then we had Cass. We took turns working, so that Cass never had to be with a sitter or in day care. Our disposable income vanished. Our somewhat adventurous life quieted to a milder tone, as we tried to be responsible parents, to Cass and his older brother Justin, who stayed with us in the summers.

We took Cass for his first camping trip when he was three months old, into Wyoming’s Red Desert, sleeping in the sand dunes. Cass discovered his natural habitat early – anywhere outside, in Wyoming.

We also started ranching about the same time, around 3 A.C. (after Cass), so we started staying close to home. Our outdoor recreational gear stayed in the shed, rarely used. Our North Face packs, Chouinard and Black Diamond climbing gear, half a dozen sets of telemark skis, high-altitude stove and tent – all awaiting the chance to return to use.

As Cass grew, we introduced him to each sport. Soon he was camping on his own, so our tent and sleeping bags were some of the first equipment to go. Snowshoes, gone.

After a few seasons on the ice, we introduced Cass to downhill skiing. The hockey gear found a new home with some other child, and Cass began consuming at least a pair of skis every year – first the “old-school boards” from the shed, then a new pair of twintips every year. The downhill ski addiction was soon accompanied by the need for the backcountry winter trips – so the high altitude stove and backpacks were no longer resting in the shed, waiting for our return.

A few summers ago, Cass asked about rock climbing. We took him out and had a wonderful day re-learning our old sport. Of course our climbing rack soon went on climbs in Colorado and Utah, without us parents who had worked to collect such fine gear.

Cass received his first gun in the year of 5 A.C., and has been a shooter ever since. He has his own collection, and “borrows” firearms from the ranch as the need arises.

Somewhere along the line, Cass became a fisherman. A few winters ago, he and his dad spent evenings tying flies. Cass is now out on his own, and wets a fly line at least once a week during seasons with open water, and even ice fishes now and then.

The other afternoon, Jim and I went to feed the guardian dogs and check on the sheep herd. It was a beautiful, slightly overcast day, and we walked down to look at the New Fork River, which serves as one boundary for our sheep pasture. We were met with the sounds of splashing – there were at least three trout breaking the surface at once in a feeding frenzy. My hands had never itched for a fly rod so badly. The trout weren’t especially big, but they were very active, making a noisy ruckus as they rose after the fly hatch hovering at the surface. It was magnificent.

Jim and I raced to the house to search for gear, and I swear I could smell the fresh cornmeal-dipped trout frying in my cast iron skillet. Our gear search netted us one fly rod, one reel, and no flies. My small and handsome black box of beauties had gone away to join the unappreciative tackle box of a teenager. We had nothing – none of my favorites, the tiny renegades. No elk hair caddis. No light cahills. No royal wulff. No olive hares ears. So sad. My box of treasures was gone.

Jim and I are recovering from that trauma, but part of the recovery process has been the realization that all of our really fun stuff has walked out the door with our children. Well, they are adults now, so it’s our turn for the good times once again. All we need are some enablers.

Please, dear readers, have pity on the flyless anglers. If you feel for our tale of woe, drop me a fly in the mail. We promise to attach it to a worthy fly rod and take it for a dip. I may even post some photos and stories of our angling adventures.

I finally figured out who the Roman- nosed Chinese “Xigou” hounds reminded me of: the late Edward Gorey’s Doubtful Guest. Look at those profiles! 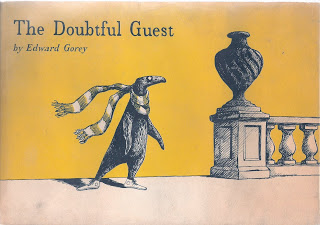 A photo taken on top of the hill in Shutesbury Mass, ca 1974, of me with my redtail tiercel Cinnamon (still one of the best gamehawks I ever had and oddly, like one of the more recent best birds, stolen after years with me), and a friend who is holding my intact rather huge albino male ferret JL. Quite a team when cottontails took to groundhog burrows; we once took eight rabbits with them in one day (in an industrial wasteland). My only excuse for such greed is that there must have been fifty left, and that in those days game was my only meat, even more so than today. I am now looking for that pic.

Thanks to constant reader Lane Batot for making me think about ferrets again. 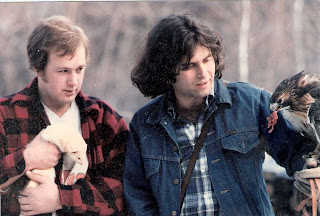 Update: I have found a photo with rabbits– I’ll scan and post later.

England’s Alan Gates, master eagler and creator of this wonderful site of Asian falconry and more, sent me a little “obituary” he thought our readers would enjoy:

Today we mourn the passing of a beloved old friend, Common Sense, who has
been with us for many years. No one knows for sure how old he was, since
his birth records were long ago lost in bureaucratic red tape.

He will be remembered as having cultivated such valuable lessons as:

– Knowing when to come in out of the rain;
– Why the early bird gets the worm;
– Life isn’t always fair;
– and maybe it was my fault.

Common Sense lived by simple, sound financial policies (don’t spend more
than you can earn) and reliable strategies (adults, not children, are in
charge).

His health began to deteriorate rapidly when well-intentioned but
overbearing regulations were set in place. Reports of a 6-year-old boy
charged with sexual harassment for kissing a classmate; teens suspended
from school for using mouthwash after lunch; and a teacher fired for
reprimanding an unruly student, only worsened his condition.

Common Sense lost ground when parents attacked teachers for doing the job
that they themselves had failed to do in disciplining their unruly
children. It declined even further when schools were required to get
parental consent to administer sun lotion or an aspirin to a student; but
could not inform parents when a student became pregnant and wanted to have an abortion.

Common Sense lost the will to live as the churches became businesses; and
criminals received better treatment than their victims. Common Sense took
a beating when you couldn’t defend yourself from a burglar in your own
home and the burglar could sue you for assault.

Common Sense finally gave up the will to live, after a woman failed to
realise that a steaming cup of coffee was hot. She spilled a little in her
lap, and was promptly awarded a huge settlement. Common Sense was preceded
in death, by his parents, Truth and Trust, by his wife, Discretion, by his
daughter, Responsibility, and by his son, Reason.

He is survived by his 4 stepbrothers; I Know My Rights, I Want It Now,
Someone Else Is To Blame, and I’m A Victim.