At first I was interested in this catalogue, but the longer I looked at it, the more uneasy I became. The kits for analysing owl pellets were fine. But what is with the artificial FEATHERS?

Long story too– not just one press…

More often than not, I like to publish pics of guns like pre- war English doubles; ones that, at their best, blur
the line between art and craft. Only their theoretical utility keeps
them to one side of that line, and ideally their utility increases as
they approach it, like Daniel’s 1870’s Purdey.

For my amazement, and because they cross and tie together several of my and I hope  your  fascinations,  I will also present things like Holland’s faux Japonaise Water gun, the only gun with gold inlays I ever really liked, or Malcolm Appleby’s early guns for McKay Brown, one of which, a feathered Raven, was donated to the Tower of London. He calls such things “totems”. When we were there it was in a dark room in a cramped dark space about two feet off the floor, with none of the associated material that even I have.

Despite the “woo” factor, I am less interested in the all- baroque over- the- top creations by England’s and Vienna’s bespoke makers who once made guns for the maharajahs of the princely states of India, and now design for Gulf princes, Texan oilfield fortunes smoothed by money, and, at the moment, Russian oligarchs.  (Though China is up and coming, recent investigations of provincials who own twenty- plus houses bodes dubiously for them, especially since as far as I know China still virtually bans all firearms more “technological” than matchlocks, which hunters still use in Tibet with the local tazis).

For an example, look for the one with animal skin textures, zebra and worse. Though if it is true that the owner hunts actual game with it in the Arctic and Central Asia, a “Flint’s Rules” toast and happy escalation: Nos’drovya!

I do still fewer modern– postwar?– production guns, unless in hunting tales. But because ergonomics, form and function, all work harmoniously together, I realized once again, while photographing my vintage Smith and Wesson revolvers, that they are artful constructions too. No one could have done the amount of handwork they required back in the day without having an aesthetic sense (the blue .22 is almost as old as I am and has a barrel of odd length; the stainless .38 “J frame” is newer but not new).

Of course the figured walnut custom grips by Herrett help. They make them to a tracing of your hand, and it takes a few months, but it is worth it. 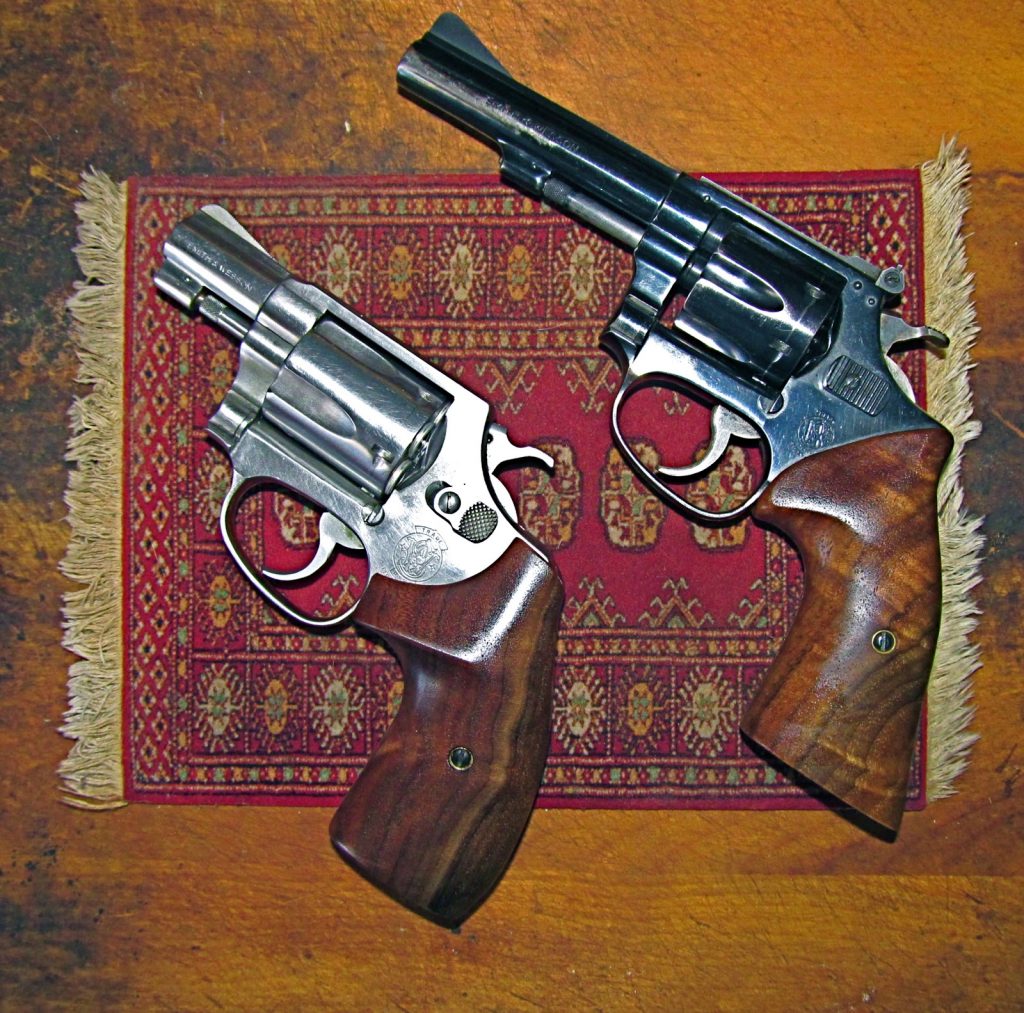 Is it true? From James Salter’s new All That Is.

“The power of the novel in the nation’s culture had weakened. It had happened gradually. It was something everyone recognized and ignored. All went on exactly as before, that was the beauty of it. The glory had failed but fresh faces kept appearing, wanting to be part of it, to be in publishing which had retained a suggestion of elegance like a pair of beautiful bone- shined shoes owned by a bankrupt man.”

I just saw the video below and am trying to give it some publicity. It is ostensibly an interview with Miles City writer, rancher, and horseman John Moore about the Miles City Bucking horse sale, but he touches on the strange way that difficult life skills have been transmuted into (often expensive) play.

When he talks about the “fire” being bred out of today’s horses I can nod,  knowing that European and city breeders are trying to do that to my tazis. He introduced me to the eye- rolling term “pasture ornament “, for a horse that just stands around,and looks pretty, about like Libby’s “supermodel dog”. He know all beings are best off with the right work to do, unlike the show salukis of the woman who once said my dogs must be mutts because they had muscles.

Read, smile, shake your head, pass it on.

* When Libby was leaving Bozeman 20 or so years ago I was ranting about idiots there to the owner of the Feed Store, who lamented, “This used to be Montana…”

Like pigeons (which I will soon be writing about again) big bore shotguns are a constant recurring interest of mine shared by few contemporaries– those mostly coastal wildfowlers who used tens in the US, something I was at least born into.

When it comes to Big Guns US shooting society tends to live in the state described in that ancient Firesign Theater skit: Everything you Know is Wrong. Bores larger than ten are not primarily poachers’ or market hunters tools, and are by no means all crude; most English firms including Purdey’s made them. The recoil of many is not particularry hard, because they are heavy enough– some modern  four bores weigh 16 pounds, though of course you have to lift the huge thing. Fowlers rarely kill whole flocks of ducks– more common to paddle in reach and flush them all before you can shoot. And no,  Mr. Buck, we were NOT “shooting eight bore loads” out of our big twelves; starting in the 1870’s, long case (3 3/4 – 4 1/4  inch) eights like the one pictured below were shooting loads of three ounces of shot, more than any imaginable twelve, out of each barrel; “light eights” with 3 1/4 inch shells could still manage 2 1/2 ounces!

I had a muzzleloading double four with rather short barrels back in the eighties.

Recently the English wildfowling writer John Humphreys, who had rescued James Wentworth Day’s legendary 8 bore “Roaring Emma” from the collection of a wealthy American, * placed the gun with the  Hull and East Riding Wildfowling Association, who will rent it out to hunters on the coast. It is an original and welcome concept and I would like to see it spread, or go to East Anglia, stay with “Johnny UK”, see the field my father flew out of during the war, and rent that cannon.

Wentworth Day was a prolific writer and flamboyant character who survived into the Sixties but cut a figure from another age– here he is with the 1870’s Joe Lang magnum eight Roaring Emma and his retriever, Mr. Soapy Sponge. after the Surtees character.

I have books by Day on everything from waterfowl to sporting dogs to shooting in Egypt and I bet I don’t have a fifth of what he wrote. Kipling could have made him up, or Conan Doyle. He may be prone to exaggeration, and I would not rely on him for sober history, but you can’t fault him on old guns. I think his newest was built before the turn of the  (nineteenth) century.

English enthusiasts still build big guns. Walter Hingley, the Canadian scholar who is one of my best sources for both gun and scientific stuff, sent me the above  and enough material to research for a month, including another fascinating link about a new TWO bore. I had thought that fours were the biggest “shoulder”– that is, non- punt– guns, but some people are never satisfied. It shoots eight ounces of lead. They pattern it at seventy yards. 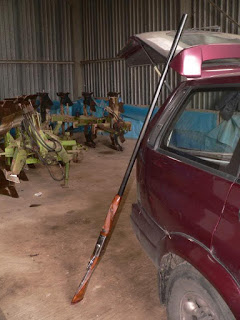 I am delighted there are still people crazy enough to do this, especially as everything old becomes commodified, costs too much, and disappears into collector’s vaults. 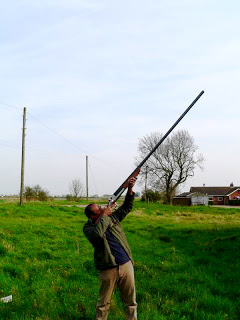 *Remember, we are not allowed to hunt with these here. To quote from the article on “Emma”: “The gun subsequently ended up in the USA, where many of our old big bores go even though they cannot be used, and was eventually bought and brought back to the UK by John Humphreys. Due to his ill health he decided to sell the gun but did not want it to go back to the USA or to sit unused in someone’s collection. By selling the gun to HERWA he has ensured it remains in this country and that it will continue to be used for wildfowling. In an incredibly generous act a long standing member of the wildfowling club bought the gun and donated it to HERWA.”