We parked the truck under the crest of the ridge and the two yellow female curs jumped from the cab to the ground, sniffing around unconcernedly for ground squirrels. Jeff quietly called the dogs back to the truck so he could snap electronic collars onto their necks. The girls remained quiet and seemed calm, but as I glanced at the seven-year old female, I could see the muscles of her back legs quivering in excitement. Although the collars can send electric shocks, for these seasoned pros, that would not be necessary. Instead, Jeff would use the collars to emit electronic beeps to communicate commands. There would be no voice commands in the field.

We spoke little, walking quietly with the dogs until we’d reached a rock outcrop perched at the end of the ridge overlooking a small pond, with sweeping views up several drainages along the face of the Wind River Mountains. We sat with our backs against the rocks, the dogs sitting patiently in front, as Jeff blew on a coyote call. We sat still, mosquitoes buzzing around us, sweat dripping down our backs, while the dogs slowly moved their heads from side to side as they scanned the hillsides for movement, occasionally adjusting their rumps for a more comfortable position. Plenty of birds, butterflies, and a few pronghorn antelope, but no coyotes, so we gathered ourselves back up for a hike to the next ridge, headed to check a location where a female coyote had denned the year prior.

The morning was long past and it was 80 degrees by the time we reached the rugged bluffs above the Big Sandy River, checking on one last den site before calling it a day. I could hear lambs calling to their mothers from the riverbed below as we began hiking toward the den, the curs trotting out in front of us. It was far too hot for anything to be happening, but the curs quickly jumped an adult male coyote that had been lounging on a ridgeline away from the pups. One yelp from the dogs and the chase was on, away from us and out of sight over the ridge. 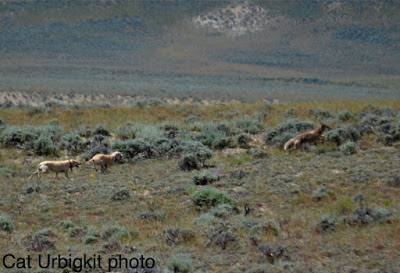 Within seconds I saw a dog’s head pop up on the skyline, as one of the dogs took a look to locate her human partners. A few barks and yelps later, the two curs came charging back over the top of the ridge, with the male coyote a few paces behind.

The coyote was agitated at the intrusion into his range, barking aggressively, and trying to get close enough to grab a mouthful of dog. But the curs were fast and determined, swinging back around and coming to a full stop to urge the coyote forward when he faltered.

The temptation was too much, and the coyote again gave chase.

The girls brought him in at a run directly across a small draw from our location, where Jeff was waiting with his .22-250 Remington. The dogs slowed and stopped, as did the coyote, giving Jeff a clean and close view. One quick shot and the coyote was down.

The dogs raced back to us for praise, then returned to rough up the carcass a little before leading us back along the ridgeline. After a quick water break, the dogs escaped the heat by climbing back into the cab for a well-deserved nap.

A new report estimates that there are 112 million working equine animals in the world, providing support to hundreds of millions of poor households in both rural and urban areas throughout the developing world. The breakdown includes:
• 43 million donkeys;
• 11 million mules; and
• 58 million horses.

Here in the United States, author JonKatz has served as the voice for the working carriage horses of New York, reminding us of the need “to work to keep animals in our world rather than take them out of it” and that earning a living in partnership with animals is a time-honored and respected tradition. It’s a reminder many Americans need, because for many, the notion of having a working animal partner is a thing of distant history. Readers of this blog tend to be people who know and understand working partnerships with animals, but for many Americans, the partnership of horse and man is limited to the workings of cattle ranches rather than broadly across our culture.

After adding three formerly wild burros (donkeys) to our ranch operation as guardians for our sheep flock, I quickly became fond of these calm and gentle creatures. In our travels throughout Europe and Asia, it would be impossible not to notice how many people still depend on these beasts of burden.

The Brooke is a London-based international animal welfare organization dedicated to improving the lives of working horses, donkeys and mules in the world’s poorest countries. Recognizing the fundamental role of equines in providing support to rural families, the Brooke doesn’t seek to ban human use of equines, but works diligently to improve conditions for these animal partners – providing veterinary and animal health services, hosting training and skill-building sessions, undertaking research, and working to raise the profile of working equine animals. The organization is based on the belief that “when animals are well and prosper, so do the owners, families and communities who depend on these animals for their livelihood.” The Brooke currently operates in Asia, Africa, Central America, and the Middle East.

With this background, the Brooke has released the results of its Voices From Women research project exploring the role of equines in women’s lives in Ethiopia, Kenya, India, and Pakistan. The report is entitled “Invisible Helpers: Women’s Views on the Contributions of Working Donkeys, Horses and Mules to Their Lives.” The entire report is worth reading, and is linked here.

The report notes that over 95% of donkeys in the world are kept for work, and in developing countries the money earned by each working equine can support between 5 and 20 family members. People rely in these animals in order to survive. Two-thirds of poor livestock keepers in the world – 400 million – are women, according to the Brooke. How they use their equine partners is revealed in the Brooke report. It should be noted that although horses and mules are included, the majority of women use donkeys for their livelihoods.

Ethiopia: Equines are the most important livestock in the farming and transportation system, providing a lifeline for 85% of rural Ethiopians dependent on subsistence farming for survival.

Kenya: Subsistence farming is the primary – or only – source of livelihood for rural women. Donkeys are used for farm work, to support other livestock by carrying water and animal feed, and donkey carts or pack donkeys are the main source of transportation.

India: In a country where 84% of women rely on farming for their livelihoods, working equines are used mainly for pulling carts or as pack animals.

Pakistan: Donkeys are widely used for transport of people and goods, and women use their donkeys in generating income through seasonal brick kiln work or rubbish collection.

In all four countries, women were asked to rank livestock species by importance and 77% put their working equines first. Cows and buffaloes, which provide milk for both their families and for sale, ranked second. Goats that provide meat and milk, and can be quickly sold in times of need, ranked third.

Researchers also found that although there is an assumption that the male members of a household are the decision-makers when it comes to purchasing livestock, most women reported that their husbands consulted with them about such purchases, and half of the women reported that such decisions were a mutual agreement between husband and wife. In Kenya, women make the decisions about livestock purchases, and in some areas a donkey is the first gift a husband presents to his new bride. In most communities in all four countries, women are the primary and traditional care givers for the family’s livestock.

One woman in Kenya provides a glimpse of the importance of donkeys in everyday life: “The donkey affects each and every aspect of my life as a woman. On a typical day the donkey fetches water, which I use to do the dishes, to clean the house, and for bathing. It also fetches sawdust which I use to cook all meals; then I hire it out and it brings in income on a daily basis that I use to buy flour for the evening meal. In other words, I eat, drink, dress, live off the donkey and more so as a woman and not one employed, I work hand in hand with the donkey. Basically the donkey is like me but to plainly put it, the donkey is me.”

Donkeys reduce the amount of labor and drudgery of household chores for these women. Imagine the burden of women transporting water and firewood without an equine partner. A donkey in Pakistan can transport a month’s worth of firewood in one day, whereas women without donkeys have to carry wood every day. In some regions, women collect dung as a fuel source and to sell to others, and use their donkeys to transport these materials. Women transport grain back and forth to mills. They use their donkeys to transport fodder for the family’s other livestock, and bring household goods to and from the market.

Many women told researchers that by using donkeys to share the burdens of everyday life, the women were able to spend more time caring for their children. One woman from Ethiopia said, “My donkey is just my backbone. It solves all my household problems.” When a donkey is sick, the woman’s workload increases and the family becomes stressed. If she can’t transport enough fodder for the family’s other livestock, the livestock will also suffer and the family will not receive as much milk from their animals.

All of the women interviewed by the Brooke were involved in some sort of income generation with their donkeys, although some was indirect income. A woman in India said, “They are our identity and our source of income. Not having one means no food for the family.” Women use income generated from their donkeys to purchase other livestock, provide food, and pay for household expenses, school fees, and healthcare.

The Brooke report concluded: “For women from equine owning communities, these animals are essential or, as some women put it, they are an additional member of the family or an additional limb of the body.”