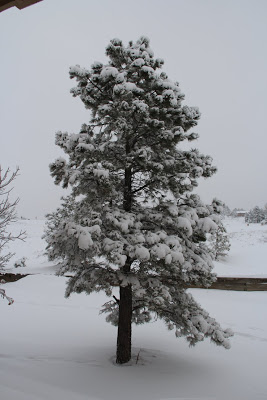 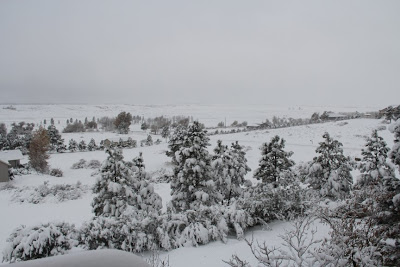 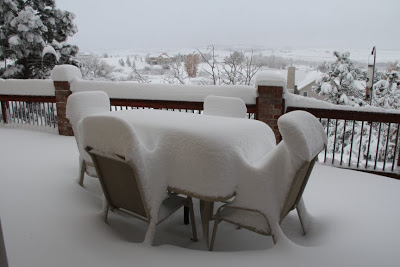 Hard to believe it was 70 degrees on Monday afternoon.

The layout of our little community of Riverbend lends itself to an occasional block party.  The streets and single-family homes are aligned in two lobes, like lungs to the left and right of a main bronchial boulevard that runs north and south along the spine of the subdivision.  This arrangement limits traffic to a shallow, respiratory inflow and outflow, with no cars passing through at high speed.  Halloween, consequently, is a pretty big deal in my neighborhood. 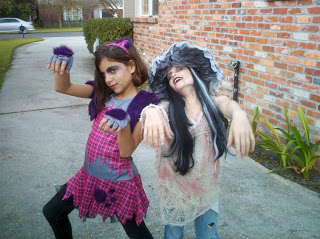 Families gather at friends’ houses for an early supper. Kids mingle in costume and run circles in the yards.  Cars roll to a crawl as daylight dims and glowsticks and reflective tape bounce into the streets on the backs of children and happy dogs.
In all, hundreds of people stroll up and down our neighborhood on this night.  Folks from less congenial parts of town park cars along the boulevard and join the locals in this annual celebration of bad manners and tummy aches.
I sit on the front porch, every year dressed as the same guy who works late and hands out candy in his slacks and button-down shirt.  My spouse and children pair with other parents to walk and sip wine while the kids sprint ahead from house to house and yell at the near-strangers who are our neighbors.
When the evening ends, all gather in the lamplight and candle glow to spread out candy on the concrete and trade pieces.  We look with displeasure at lingering teenagers, groups of un-costumed kids too old for this but not old enough for another role.  We know them.  They used to come by with their parents.
Around 7:30, one of my daughters hitched a ride home in the bed of a friend’s truck.  I saw the familiar silver Ram move slowly with its precious cargo of six or eight children and pull up in my yard to drop her off.
My daughter and I handed candy to kids for half an hour, but when the customers thinned, she leaned into my lap and lay back against my chest. I rocked the chair and waited to hear what brought her home so early.
Her sister, we knew, was still out there with friends, still filling a big paper Whole Foods bag with candies from Wal-mart.  I thought she must regret her decision to leave, but I think her feeling was more complex. Without turning her head or looking away from the dwindling crowd of passers-by, she asked me, “How many more years of this do I have?” 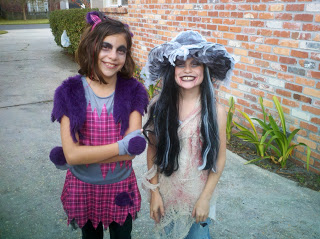 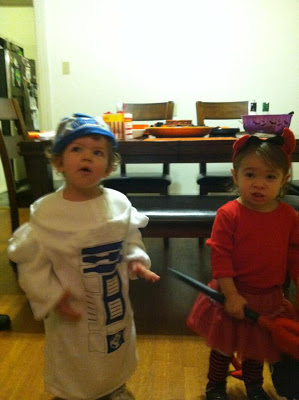 That’s Bella on the left in her R2D2 costume last night. The little devil on the right is her pal Stella.

The NY Times tells us about Animal Cannibals. Well they did get a catchy title: “It’s a Toad Eat Toad World.” And you complained about my laughing stalk.

Charles Mann tells us How the Potato Changed the World, an extract from his estimable book 1493. Great potato picture, huh? Get the book.

A paleoanthropologist from up the road in Boulder is performing wear analysis and isotope analysis on fossil teeth to determine australopithecine diet.

Read this review of a new book on Columbus’ forgotten voyages.

I was delightfully surprised by this piece on the world’s oldest museum built by a Babylonian princess 2500 years ago and excavated by British archaeologist Leonard Woolley in 1925. I remember reading this story in one of my first books on archaeology when I was 8 or 9 years old and hadn’t heard it since. The whole article is very well done with a bonus picture of Woolley with his younger colleague, T.E. Lawrence. 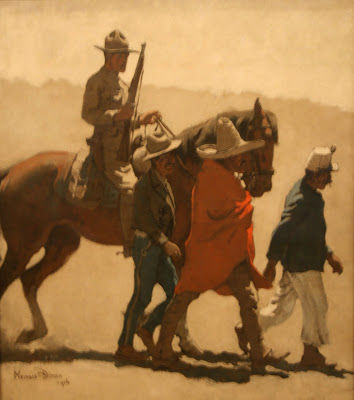 I posted a couple of weeks ago about a recent visit to the Denver Art Museum. The new director there, who shook up the Native American exhibits, is apparently a Maynard Dixon expert. I’ve posted before how much I enjoy Maynard Dixon’s work so it was nice to see that the new director has had them pull out and show what they have. The painting above titled “The Prisoners” is an illustration used for the cover of Sunset Magazine in an issue that dealt with the American incursion into Mexico in 1916. 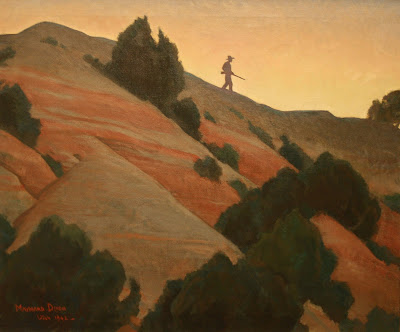 This one is called “Hogback Hill” and was painted in 1942, four years before Dixon’s death. I think it is the most understated painting of his I have seen. 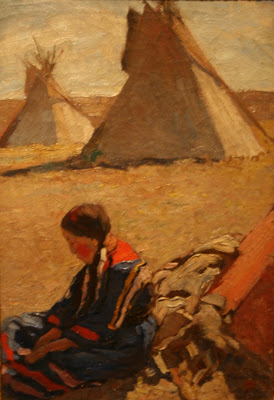 “Little Sister” is an oil sketch painted in 1917 while Dixon was on a trip to Montana. 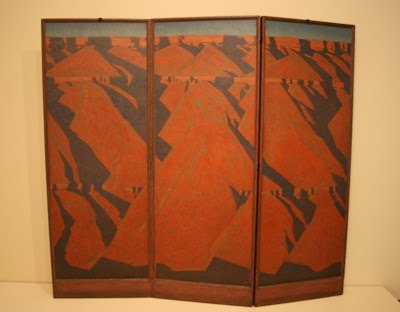 This painted folding screen is a real eye-popper, emblematic of Dixon’s work, and I think I have seen it illustrated in every book I’ve ever read about him. “Study in Cubist Realism” was painted in 1925. I got a stern lecture from one of the Museum staff for using my flash while taking this picture.