Thoughts on AR from the letter column of the Wall St Journal by one George Price. It will never happen of course.

“If the animal rights who attack laboratories to “liberate” the animals… had the courage of their convictions, they would each carry a little card (like an organ- donor card) reading ‘If I am found sick or injured, do not give me any treatment developed or tested by animal experimentation. My life is worth no more than an animal’s, and I refuse to live at the cost of animal’s life. Just let me die.’ ” 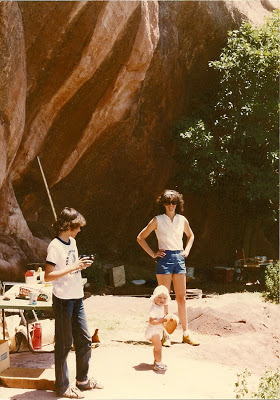 Here is a picture of Connie and 18 month-old Lauren at the excavation of a rock shelter at Ken Caryl Ranch in Jefferson County, just west of Denver. The work was conducted by the Colorado Archaeological Society in 1983 and we were there volunteering. I can’t recall the name of the young man standing by the table.

The Smithsonian Institution had a press release yesterday that was picked up the the New York Times today concerning the discovery of evidence of cannibalism in the early years of the Jamestown colony in Virginia. To anyone familiar with the story of Jamestown, this is hardly a surprise, as a number of accounts of the “starving time” that almost wiped out the colony in the winter of 1609-10, mention that corpses were exhumed from graves and butchered.

The archaeology team led by Bill Kelso, who I mentioned in a post last year is the discoverer of the original James Fort, found the butchered remains of a 14 year-old girl in a trash deposit that also contained the remains of horses, dogs, and other animals that had been butchered for food. You can see the cut marks in the picture of her jaw at top. The cranium had been hacked, presumably to remove the brain. It is believed that the girl was already dead when she was butchered. 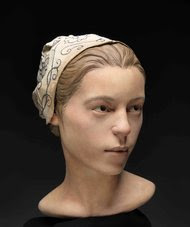 Analysis of the remains was conducted by physical anthropologist Doug Owsley of the Smithsonian Institution, who is perhaps best known for his work on the Kennewick Man skeleton. One of the results of his work is this affecting reconstruction of the facial features of the girl. It is amazing to me what physical anthropologists are able to figure out these days when they have time to work. Isotope analysis of her bones showed that she had grown up in the southern coastal region of England, that her diet contained English rye and barley, and that overall, her diet had been rich in protein, indicating that she was most likely the daughter of a high-status member of the colony.