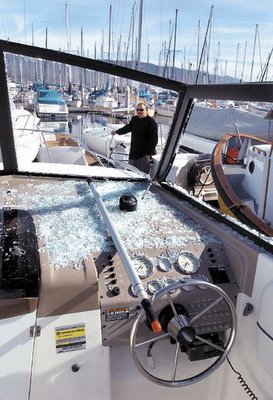 Last Wednesday evening at just before sunset, Gerald Gormley left Santa Barbara harbor in his new 27 ft Bayliner boat. It was a brand-new boat, only the second time he had taken it out, and two friends accompanied him for a planned sunset run. They were off Leadbetter Beach and Santa Barbara Point when a 30 ft long gray whale suddenly breached – came completely out of the water – and landed on top of the boat. The weight of the whale crushed the cabin (see photo above) and it rolled off the boat back into the water. Just to show this wasn’t a clumsy whale accident, the beast came around and took another run at the Bayliner and slammed the boat with its tail. This damaged the boat’s rail and injured Gormley’s friend Robert Thornburgh. The whale’s tail broke some of his ribs, cut his hand, and imbedded some barnacles in his back. Finally the whale made a third run at the boat, rolled one of its eyes out of the water and stared at the boaters.

”You can look into most animals’ eyes and see nothing,” Mr. Gormley said. ”But not this one.”

After staring them down, the whale left, and Harbor Patrol quickly rescued Gormley and his party. Thornburgh was treated at a local hospital and released. This incident was briefly mentioned in local TV news (which I missed) but is in today’s Santa Barbara News Press (whence the picture) as well as the LA Times. I apologize if the News Press link is blocked, sometimes they work and sometimes not. I heard an interview with Gormley on the radio while driving in to work this morning. I’m surprised none of the wire services has picked it up yet.

This is not typical behavior for gray whales, which regularly migrate through here on their seasonal journeys between Alaska and Baja California. The most plausible cause for this may be that this was a female and the boaters may have gotten too close to her calf. The whale left some shreds of blubber on the boat and a biologist took samples for DNA analysis to confirm it is a gray and to determine its sex.

In the interview I heard this morning, Gormley seemed somewhat blase’ about the fact his brand-new $50,000 boat was wrecked. He did say that when he called his insurance carrier to file a claim that the adjuster refused to believe him and said, “You can get into a lot of trouble making crank calls like this!”