Both Peculiar at O & P and Heidi have been producing an inordinate amount of good bloggage lately and you should really read all of it. But a few highlights: here, Peculiar writes an essay on the late Steve Irwin that is far better than my brief commemoration below, going as he does into what high risk pursuits actually are (see also splendid photos above and below this post)

And here he describes a particular ten- book “stockchen” (meme) that I am hereby tagged with, and will post soon. He gives me too much credit– I read fast but therefore must keep a huge pile of books bedside and elsewhere– I am notorious for taking two or three in the CAR– to feed my raging appetite.

As for Heidi– if you have time read it all of course. But my favorites are on Equestrian Chic and — Demolition Derbies!

Not a subject I want to get into often here, but this essay on The New Republic’s blog ( by a writer who is a secular Jew)seemed to have some small- l liberal things to say about the Pope controversy.

“By my human standards “No man comes unto the father but through Me” is a terrible way to run a universe; but if there is a God I have no reason to think that His rules will conform to my contingent, twenty-first-century Western liberal human standards. And so I don’t expect religious believers to softpedal the exclusionary implications of their beliefs. I don’t think Unitarian Universalism is somehow a better religion than Catholicism or Mormonism or Orthodox Judaism ( sorry Mary !)just because its god seems to be so nice and inclusive; indeed, my sympathies for the aesthetic and moral-psychological experience of religious belief tends to run the other way. This is a bit like the stance of many American lapsed Catholic or many Israeli secular Jews, I incline to say, “I don’t believe in God, but the God in whom I don’t believe is a serious one!” But I don’t quite mean that. Rather, I want to say that if there is a point to religion and theology, then that point is undermined by the reluctance to draw distinctions and take them seriously.”

Merrie Olde England–the one with guns and fieldsports–may be gone (or going), but a few good souls refuse to let her die. Enter The Connaught Square Squirrel Hunt. You may recall a couple previous stories we shared, wherein British citizens lampooned the Hunting Act of 2004 (which outlawed, among other things, encouraging your dog to chase rodents) by publicly encouraging their dogs to chase rodents.

Elevating this idea to nearly an art form, The Connaught Square Squirrel Hunt holds a “drag hunt” (with a lure) for a single pet terrier named Dylan (or Dillion: “he can’t spell”) , across a public park in London.

Drag-hunting squirrels is a true art and we’re only just beginning to learn its dark secrets. This is where we are so far:

First, you must prepare your “drag”. After various experiments, we discovered that doesn’t need to look or smell anything like a squirrel. It just has to catch the hound’s eye. So we use an old sports sock.

Next, you must find a willing Huntsman to volunteer to run from the hound pulling the “drag”. This is called “laying a line”, so the professionals tell us. It’s a good idea to start slowly to catch the hound”s attention and then accelerate away. Usually, we ask the Huntsman to run in a curve to allow the slower followers to cut the corner!

Then comes the most important part: the release.

It’s a fine balance. Release the hound too early doesn’the drag doesn’t last long enough to be exciting. Release him too late and he may lose the line. This can be quite embarrassing when he’s running through tourists and picnics in Hyde Park followed by dozens of panting followers….

It’s the perfect foil, made an even better farce by The Hunt’s “official” attire and social schedule:

Hunt Colours, White Tie or Banned Quarry
Our hunt colours are midnight blue and shocking pink; please feel free to wear them.
Orders and decorations may be worn.

And so why all this?

It is absurd that the Hunting Act prohibits you from encouraging a dog to chase a squirrel. More than that, it is frightening that your dog could be put down and you could be fined Â£5,000 for saying “Go on Rover, get after it!”.

What is really sinister though, is that if a policeman thought you might want your dog to chase a squirrel in the future, he could raid your home and confiscate evidence.. All this without a warrant from a Magistrate: even a suspected burglar has more rights than a suspected Squirrel-Hunter!

When we realised that the innocent habits of most dog-owners were illegal, it was clear that this should be publicised as much as possible. People should be made aware of the law and how to act within it. And the more people that think the Hunting Act is an ass, the more people will support its repeal.

Hat tip to Roseann for this link! 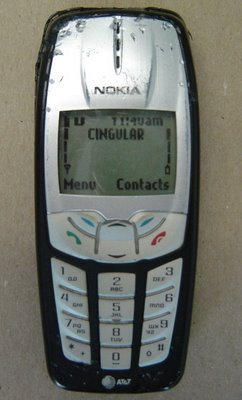 ……..all sorts of things, including cell phones. Here is mine (thank you, Sadie!) and believe it or not it still works. I’m sure Steve can relate. 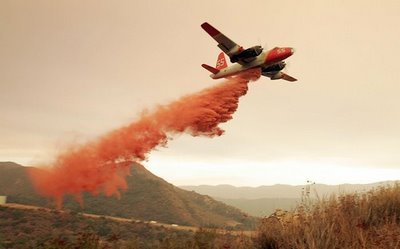 Back in June, I posted on the beginning of fire season in this region. Believe me, it is still going strong here, with a monster fire, called the Day Fire, raging east of here. The LA Times had good run-downs on it yesterday and today. It really slapped me in the face over the weekend.

I went to the USC-Nebraska football game in LA Saturday night (Lauren got me a ticket for my birthday) and driving back late that night, I was headed north on I-5. When I got to Valencia you could smell the fire and see it on the horizon. From there I headed west on SR-126 and could either see the fire on the skyline or see it reflected in the smoke above it all the way past Lake Piru. That’s about 12 miles or so east-west. It’s burned almost 70,000 acres so far. I passed a convoy of six LA County firetrucks headed west into Ventura County to fight it.

The Santa Ana winds are blowing straight out of the east and pushing the fire west into the town of Ojai. The smoke and ash are blowing straight into here. When I got here into Santa Barbara about 1 AM the ash was so thick it was like driving in snow flurries. And this is with the fire about 30 miles away. Here’s a picture of ash on the car I took the next morning. 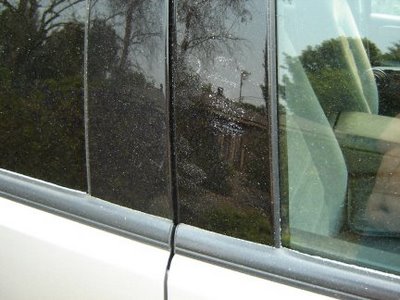 My office window looks out on the Santa Barbara airport and I have been watching the bomber shown in the top picture continually flying in and out over the last two days.We are in for a tough time with this as it could be another month before it starts raining again. Like I said in June, pray for rain. 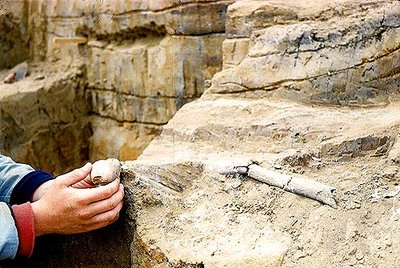 This interesting article appeared in the LA Times while I was out of town. It discusses the work Dr. John Johnson of the Santa Barbara Museum of Natural History and others are doing with mitochondrial DNA in living Native Americans and prehistoric remains and what it has to say about the peopling of the New World. Johnson tells me he believes his data supports the hypothesis of a coastal migration. 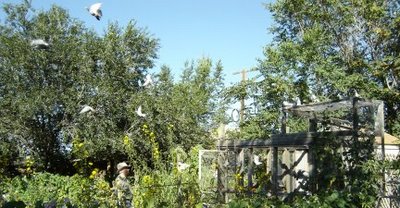 In Magdalena. Plus the other pigeon loft. 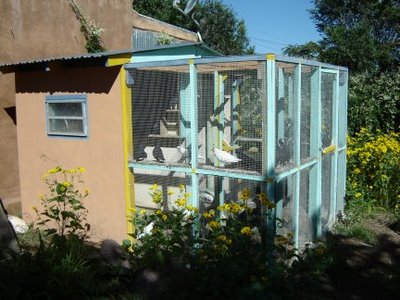 We will soon have a European correspondent– a Magdalenian at that.

Here is a foretaste:

“In any event, I spent the last week in Tirana, Albania. It’s an interesting city, really in the early stages of becoming a completely different place I think. All the buildings are garishly painted in fresh coats of primary colors, randomly pieced together, just a huge affront, I think, to Soviet greyness. It’s a very insular place, and difficult to get around in. I went on a days notice and arrived not knowing a single word. After a few days I had a few basic expressions down, but it was still a chore to communicate even simple things, and a lot of the time, when someone couldn’t understand me, they would just give up, turn around and put me, apparently, completely out of their mind. It was a great experience.”

Another fine and funny female essayist has a piece up on– well, a lot of things, including bottoms, bosoms, and “Things which are neither one thing or the other”. Here as a taste is a swerve through (over?) vegetarians:

“Vegetarians are a pain at dinner parties, forcing decent omnivores to eat like rabbits or the host to cook extra food. They are also a pain in restaurants, which now must include vegetarian dishes at the expense of other meat dishes. Really, vegetarians should stay at home, but they don’t. London is heaving with them. While failing to make decent guests, they also fail to make a difference to animal welfare. Movements for “cruelty-free” meat, such as Compassion in World Farming, could make a difference. But the world is not going to become vegetarian and nor should it. Moreover, a vegetarian who eats dairy products condemns male calves to slaughter. And what is a vegetarian who doesn’t eat dairy products? A vegan. Vegans are whey-faced, cadaverous lunatics, but they are consistent. Sorry, veggies, you are neither one thing nor the other. Eat meat or go the whole hog and be a vegan.”

Larissa— who is as far from a “frigid, frustrated suburban biddy” as anyone I can think of, is furious with, among other things, crude come- ons:

“But when he spoke, his intentions were so unappetizingly clear—so impersonally sex-driven –that out of abashment and instinctive non-whoriness I mentally aborted those embryonic “maybe” thoughts I had harbored for him and felt my loins frosting over as I waited for the barrage of come-ons to end. So unworried was he that his baldfaced bluntness was inappropriate, unappealing, or even downright repulsive to any woman who wasn’t a slipshod floozy, that when I declined, instead of rethinking his tactic and hazarding a different one, he demanded that I explain why I wasn’t interested. As flummoxed as I was at hearing that a one night stand with the likes of him or bloody-anyone should fill my heart with giddy joy or whatever, the second shock of being challenged to justify myself left me stunned. I should have slapped him, and only later did I realize how unfortunate it really was that I hadn’t slapped him, because there was a deeper insult I hadn’t articulated to myself in the moment: He not only thought I was the kind of person (slipshod floozy) who would respond to such crassness, but he felt he could say it to my face.”

If I were on the receiving end of this splendid essay, I’d join, not a monastery, but the Skopti. How’s that for a Russian ref, Lulu?

Shoot the editor, too.