MSN Careers has an interesting piece up on the 10 Dirtiest Jobs in Science. In no particular order they are:

I would say Hot-zone Superintendent is maybe the most dangerous, but for dirtiest, I vote Carcass Cleaner. What is your vote?

Things stack up when you are busy!

Nanny state part one thousand and ???: Britain now is suggesting compulsory training in nursery rhymes for inept parents. Can’t make it up…

While Beijing is pursuing a compulsory one- small- dog policy— not that Albuquerque mayor Marty Chavez wouldn’t do the same if he had the power.

Also in Britain: a Moslem gent, hungry from his Ramadan fast, attacked and killed a park swan. To me, the funny part is that he “admitted possessing a kitchen knife in public”. The depravity!

On a more positive note, Dr. Hypercube introduces us to the fantastic zoological art of Briony Morrow-Cribbs at the Diary of a Mad Natural Historian.

Continuing in that vein, check out regular commentor Moro Rogers’ Kambodia Hotel Blog. She and I have been corresponding for many years (really– she was a precocious talent!) and it is a delight to watch her skills unfold. Moro, you should tell us about such things!

A federal judge is allowing Indians to violate federal laws and kill eagles. How far should religious tolerance extend? I think in conservation biology should generally trump all. My initial and admittedly reactionary reaction– in a note to Matt– was: “If they want to kill eagles they should also live in tipis, and give up trucks, booze, welfare, and rifles!” (living next to a particularly dysfunctional reservation will make one sour). Matt as always was more humane, though his perscription amounted to the same thing put more thoughtfully:

“I am not one to wish “primitive” peoples back into
their molds (or worse, our idea of their molds), but I
don’t think you can have it both ways. The old, right
ways contain their own natural limitations.

“If you want to dig in and catch your eagle by hand,
kill it barehanded and use every part of it for a
ceremony once a year, I’m OK with that. I have
“harvested” wild raptors and (unwittingly) killed them
in the pursuit of my own nirvana. I’ve got no room to
complain.

“But add bullets and money into the equation and all
bets are off.”

Back at the ranch: Reid sent this LAT piece on the “discovery ” that grazing can be good for the range.

Well, “duh”. Grass coevolved with grazing. Until we get “rewilding” it had best get at least some grazing or prooblems will result..

Michael Brendan Daugherty at Surfeited with Dainties has posted a stirring defense of dandyism. It’s not just for metrosexuals! “If, as Chensvold insists, Dandyism is a male archetype, then a Dandy must be identifiably a man. He ought to like wine, women and song more than attention, fake titles and sunflowers in his own lapel.”

One more: the War Nerd has some bleak views on our future conflicts. Will we ever learn? 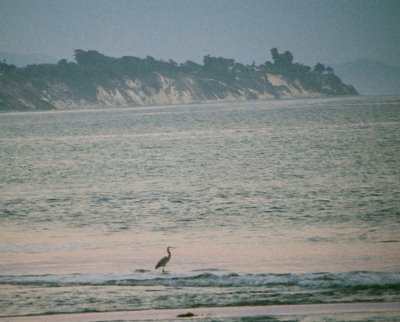 Most of us tend to think of Great Blue Herons as large, freshwater wading birds. Around here, they’re almost as likely to try their luck on the salt as this fellow is doing at Goleta Beach.

Last Tuesday I had lunch with Michael Blowhard and his wife at the Beachside Cafe at Goleta Beach. They were in town on vacation and we were able to meet up. Michael is the principal contributor to the group blog 2blowhards, a daily must-read for its take on culture, the arts, history, fashion, architecture, literature and just about everything else. Michael has always been very supportive of this blog and 2blowhards has been on our blog roll from the beginning. Steve refers to Michael as his “blogfather.” Mrs. Blowhard has her own brilliant accomplishments in the blogosphere, the theather and elsewhere.

The combination of the Beachside’s beautiful setting, the intelligent and informed conversation, and my favorite shrimp-filled chiles rellenos couldn’t be surpassed. So much good talk on so many subjects: collaborating in the blogosphere with friends you’ve never met, the environmental consulting business, life in Santa Barbara, falconry and tazis, the peculiarities and perils of Midwestern cuisine. On this last topic Mrs. Blowhard cheerfully observed that all the famous mass-murderers in California history (Charles Manson case in point) were originally from Ohio. Maybe the food was to blame!

After lunch I took a photograph that I think captures the brio of this talented, attractive and brainy couple. Alas, their need for anonymity prevents me from sharing it.

Gorbatov is working on illustrating a monograph on the sakers for a German scientist. He knew I would like this one because it depicts petroglyphs at Tamgaly in the Kazakh steppes, where we have both seen sakers. (See “Sunhead” and other posts below). 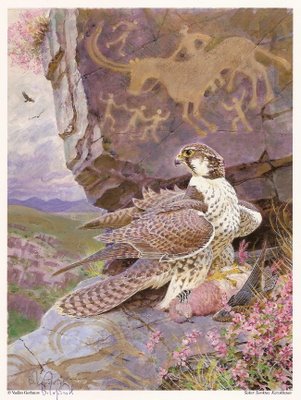 He confirms a rumor I have heard: these images are of horses wearing horned headdresses, which have been found in graves on the steppes. 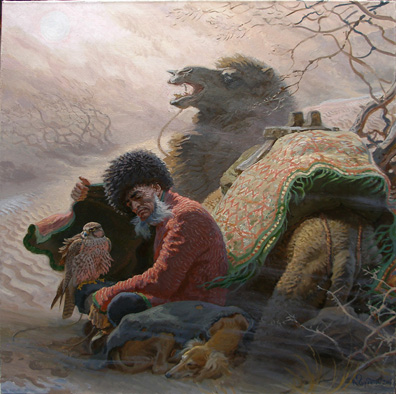 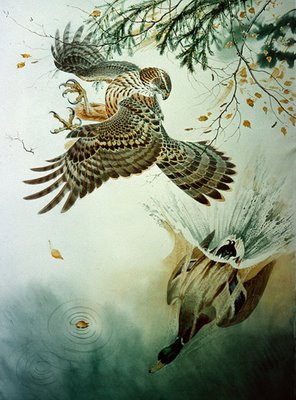 “Berkutchi”: relatives of my dogs– really! 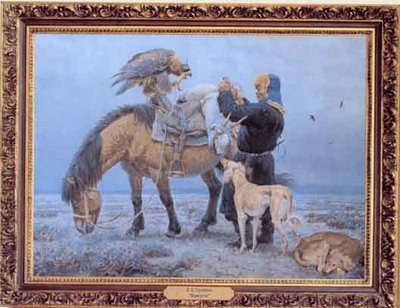 “Seton’s Lobo”– for a Korean edition of the classic. Vadim painted these illustrations– in a two- page format– from backgrounds we sent, before he had ever been in New Mexico. Can’t wait to see the new stuff now that he has. 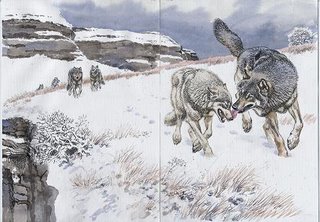 To see or buy his new American childrens’ book, with peregrines and eagles, go to the Raptor Education Foundation link in the post below and click on “Fidget”.

We have just been graced by a visit from Russia’s greatest wildlife artist, Vadim Gorbatov, “guided” by our friend Peter Reshetniak of the Raptor Education Foundation in Denver. It was a whirlwind — we attempted to show him all of our corner of New Mexico in one- and- a- half days, plus cook two good dinners, visit the Spur etc– but we had fun.

Vadim is well- known in Russia but not here so far, which I am slowly trying to change. Interestingly, the Soviet Union, if for all the wrong reasons, preserved classical art training long after the West seems to have abandoned it for modernism and post- modernism. Could a romantic realist like Vadim have made a living here?

Like anyone of his generation (he is 66) he has horror stories. His dissertation was delayed three times and he was repeatedly threatened by the KGB, as was his brother, because he was seen in possession of one banned “Samizdat” book.

We were able to find quail scuttling along in the dirt tracks on Lee Henderson’s ranch, a Ferruginous hawk, hawk nests including the notorious metal one, herds of antelope, and the Water Canyon Peregrine eyrie, all of which he sketched.

Another high point was drinking with Lee at the Spur. We taught him how to toast with vodka shots Russian- style; Vadim sampled good tequila (“Mexicanski vodka”); Lee showed Vadim what spurs were, and other cowboy lore.

I’ll put some of the “people” shots here and some art in the next post so as not to overwhelm Blogger.

A strange Central Asian- looking raised well where we saw the Ferruginous. 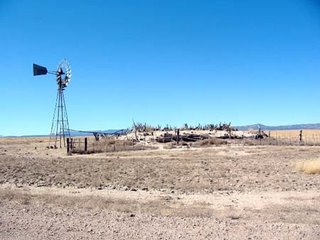 Libby and Vadim take pics of Peter and me. We did a lot of this.. 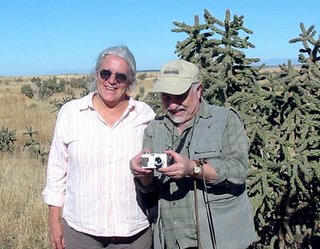 Vadim examines a Swainson’s hawk nest on the ranch. Ladron peak in the background. 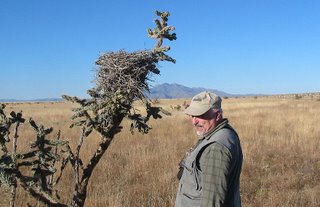 Peter and Vadim taking out the girls for a hunt. Alas, no hares.

Well that didn’t take long. Remember my post last week that discussed possible Neanderthal/modern human interbreeding based on skeletal morphology evidence? You may recall, I figured that genetic evidence would tell the tale.

Today Nicholas Wade of the New York Times reports on a study that finds circumstantial evidence that a gene for brain size now present in most of the world’s population came from Neanderthals. From the article:

“Both genetic and fossil studies show that anatomically modern humans emerged 200,000 years ago in Africa and migrated into Europe 40,000 years ago. In about 10,000 years, Europe’s longtime inhabitants, Neanderthals, became extinct. The mainstream interpretation is that modern humans somehow replaced them without interbreeding.

In previous research, Dr. Lahn and associates discovered that a gene for brain size called microcephalin underwent a significant change 37,000 years ago. Its modified variant, or allele, appeared to confer a fitness advantage on those who possessed it. It is now present in about 70 percent of the world’s population.

The new research focused on the two classes of alleles of the brain gene. One appeared to have emerged 1.1 million years ago in an archaic Homo lineage that led to Neanderthals and was separate from the immediate predecessors of modern humans. The 37,000-year date for the other variant immediately suggested a connection with Neanderthals.”

Apparently more DNA studies about modern humans interbreeding with Neanderthal and other archaic humans are due out soon. The ever-reliable John Hawks Anthropology Weblog has lots of interesting things to say about this in a couple of posts. 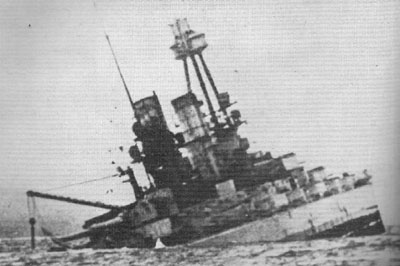 After the signing of the Armistice that ended the First World War in 1918, the warships of the defeated German Fleet were interned at anchorage at the main Royal Navy seabase at Scapa Flow in the Orkney Islands in the north of Scotland. The ships were kept there with skeleton crews of German sailors to maintain them.

By June, 1919, the final peace agreement to end the war had still not been concluded and many in the German military were convinced that fighting could conceivably resume. On 21 June 1919, when the main British fleet left the area for exercises, Rear Admiral von Reuter, commander of the German fleet, ordered all 74 ships scuttled, rather than have them fall into British hands. You can see the battleship Bayern on its way down in the picture above.

Most of the ships were salvaged in subsequent years, but seven still remain at the bottom. 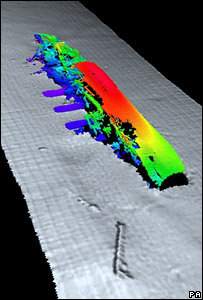 The BBC has a story on a high-resolution sonar study of the area that includes the spectacular 3-D image above. The ships are a popular scuba diving attraction, and the charts generated by the study will aid them and historic preservation officials.

I have always been intrigued by the legend of the Chupacabra. Terrierman Patrick Burns and his working terriers have hunted one down, and he has the pictures to prove it.