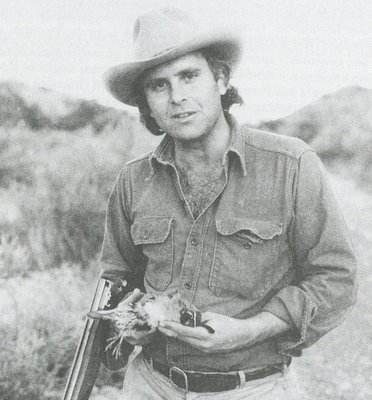 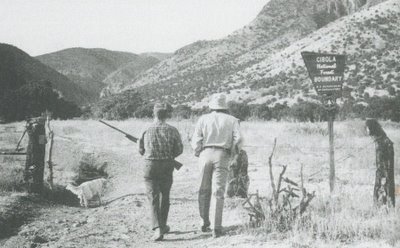 UPDATEWell, since I got Steve to bite, I’ll let everyone know where these came from. I was rummaging through books the other night and found “Quail Hunting in America” by Tom Huggler. The guy drove three-quarters of the way across the country in 1985 hunting along the way so he could write this book about hunting every species of quail in the US in one season. Apparently he networked through friends of friends of friends who could help him hunt. He hunted with Steve and the late Floyd Mansell in Magdalena. They figure prominently in the chapter on Gambel’s Quail from which these pictures come. The book was published in 1987 and I bought a copy in 1995 before I knew who Steve was. So the other night I was leafing through a book I hadn’t looked at in years and out pops Steve.Huggler on Bodio: “Steve Bodio is a young writer with Boston roots. He is the twentieth century equal to a man of letters and is a walking encyclopedia on topics as diverse as fine wine to a geologic history of the land. For the past eight years, he has written “Bodio’s Review” for Gray’s Sporting Journal and has recently published Good Guns, his second title from Nick Lyons Books (the first is Rage for Falcons).” 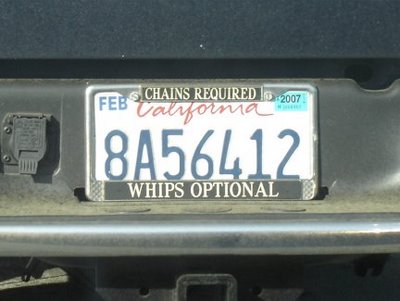 …….other than this was on the back of a large pick-up truck driven by a small young woman.

Beyond irony: Mao Tse Tung is now considered to be a diety dedicated to making people rich.

No, not the kind with the slit in the floor, which in variations from modern to disgusting is common in the east. I’m talking about a pic that our friend Christina sent, taken in Istanbul: 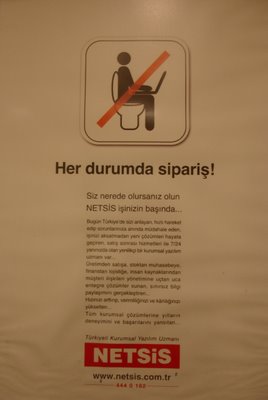 Turns out it does NOT say “No blogging on the loo”. Professor Janet Jones, one of our intrepid band in search of tazis in Kurdistan last winter, has contributed a translation:

“The thing you sent is an advertisement. It reads:

‘In every occasion we take care of you! Wherever you are, NETSIS is working for you.’

“The rest of the advertisement talks about the services that NETSIS
provides.”

She doubtless remembers an evening when our guide Ahmed’s cousin, to general hilarity, mimed his first encounter with a western toilet in a hotel, He had attempted to squat above it, but found it hard to keep his balance on the rim.

The tale was told in Kurdish, but the acting was graphic enough for the Americans to understand…

Anne Price at the Raptor Education Foundation sent this photo of an oddly- marked house finch (Carpodacus mexicanus) trapped at a banding station. 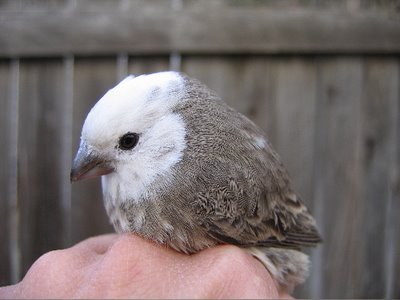 They seem to be an exceptionally variable species, with males in particular varying from almost all red to brown with just traces of red. Could this have something to do with the fact that they are almost as human- associated (dependent?) as house sparrows? Though they are native to the American west, they now nest into New Engand.

“(OK, that last one maybe a little over the top.)”

He then sent this: 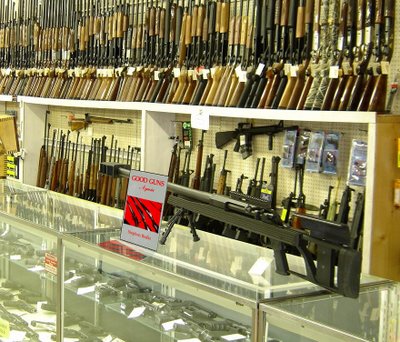 Actually the Golden Spur Bar in Magdalena used to sell my books. And Ron Peterson’s Guns in Albuquerque…

Darren, while still tormenting us over the cladistics of the Giant Hoatzins of Doom, has written a good post on the “dinosauroids” of popular imagination (and, as Reid reminds us , of the splendid science fiction novels of Ken MacLeod). He doubts the humanoid appearance of the early model, and prefers a “birdier” version by the incredible Nemo Ramjet.

Thanks to Darren for the intro to Nemo, a scientifically literate artist whose vision contains multitudes, who has everything from whole imaginary ecologies to Turkish stuff (!) on his site. You could lose yourself in it for days. He’s going on our blogroll.

…are coming for you.

I never met a trans- fat I liked. But doesn’t this give you a shiver?

“New York Mayor Michael R. Bloomberg, by contrast, likes the idea. On Monday he reiterated that support, saying, ‘The next big health issue is obesity. If you want to do something about it, it’s going to require some decisions’.”

What’s next? Forced starvation for the fat? 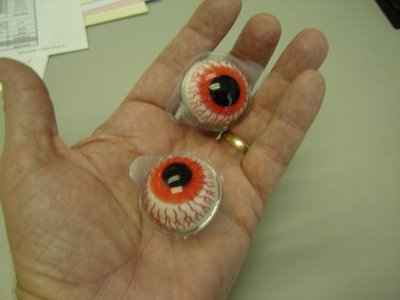 Now that our children are adults and aren’t around so much to educate me, I find that I am often late catching on to new trends and new products. But I have to say that I hadn’t seen these candy gummy eye balls until this Halloween. They really crack me up. I’m almost afraid to eat one.Gives new meaning to the term “eye candy.” And the phrase, “I’ll keep an eye out for you.”

I blogged recently on Rod Dreher’s moving account of his conversion to Orthodox Christianity. Last week the one and only John Derbyshire wrote an essay on his loss of religious faith. I thought I must be nuts to like both, finding them sane and thoughtful. But apparently I am not alone– both Dreher himself and Catholic columnist Michael Novak have written sympathetic essays in reaction.

Derb has to be the most honest writer alive today. He never tries to give offense but refuses to give lip service to anything he believes is not true. This makes him unpopular among some who should thank him for not being blinded by his own “side’s” prejudices.

(By the way neither his style nor his unbelief has anything to do with atheist bomb- throwers like Dawkins. I love Dawkins’ best evo- bio stuff but railing at the Amish and finding God at the root of all evil after the past century’s anti- religious tyrants would be silly if it were not perverse. Was it Odious who said that the self- described “brights” should be called “smugs”?)

Me? I am with Derb more or less, with a deep sense of awe at the mystery of the universe and a fascination with evolution. I have an attachment to my Catholic roots and an interest in Buddhism. John, does that make me a “Mysterian”?