Two gems here and here. I think the octopus wins though.

I voted– always do– but here is an articulate essay on NOT voting. It reminds me a bit of Evelyn Waugh’s assertion that it was only necessary to vote when you are opposing a great evil– and that is rare.

“My view of democracy is essentially a utilitarian one, not a moral one. Democracy is good insofar as it provides a check on corruption and abuse of power. It is a tool that can be used to protect liberty, but it is not liberty in itself. When it ceases to do its job, then it’s time to put the tool away and use a different one that actually works.”

WAITING FOR THE BARBARIANS

What are we waiting for, all gathered in the forum?

The barbarians are coming today.

Why is there such inertia in the Senate?
Why are the senators just sitting there, not passing laws?

Why is the emperor out of bed so early?
Why is he sitting at the city’s main gate,
crowned and looking so formal on his throne?

Because the barbarians are coming today
and the emperior is arranging a welcome
for their leader. In fact, he has prepared
a formal decree, and on the parchment
he has written numerous titles and marks of respect.

Why have our two consuls and praetors come out today,
dressed in their embroidered red togas?
Why are they wearing bracelets set with amethysts,
and rings with bright, shining emeralds?
Why are they carrying their official staffs
inlaid with silver and gold?

Because the barbarians are coming today,
and such things are known to dazzle barbarians.

Why don’t the famous orators arrive as they always do
to pontificate at length and expound on their views?

Because the barbarians are coming today,
and they are bored by eloquence and long discourse.

Why has this anxiety come upon us all at once,
why such confusion? (How serious all the faces!)
Why are the streets and squares emptying so quickly,
and all the people returing to their homes so subdued?

Because night came and the barbarians never appeared.
Later some of our men arrived from the borders
and gave us the news: there were no more barbarians.

What are we going to do now, without barbarians?
Those people, they were a kind of solution.

NRO tipped me to this piece in Wired on the “Top 10 Most Irritating Expressions in the English Language.” Their list:

I know each of us could compile his own list, but I was heartened to see “24/7” on this one. Any list I would make would have to include “Not so much” and “Sooner rather than later.”

What are some of your candidate phrases for an annoying list?

My recent travels kept me away from the home computer for nearly three weeks. Although my family had done an exceptional job at cleaning off emails for me, eventually they were overwhelmed and the list of emails in the inbox got longer and longer. It took me about three days, but I actually managed to get through them all (sorting, filing, printing, deleting, and responding). Do you get that – I actually completely emptied out the inbox – take that, world! What a feeling of power, of freedom! This is the first time I have ever managed to do this, and I recommend it to others. Kind of.

The fallout from the empty inbox has been surprising. I have found that I am suddenly very possessive of that inbox and its emptiness. I hear the computer ding that a new email has arrived and I jump to read it and respond, so I can delete the damned thing rather than allow it to continue to mar the beauty of my empty inbox. When I leave the computer for half a day, it’s with great annoyance that I find the emails have been sneaking in and piling up again, reproducing – argh. It doesn’t matter that some of the emails contain good news, notes from friends, needed items – nope, it just pisses me off.

I’ve waged this private battle with my inbox obsession for more than two weeks. Oh, what to do now? I guess I’m just going to have to surrender and kiss that glorious empty space goodbye, letting it once again be taken over by incoming messages.

As a livestock producer, I have an everyday relationship with predators that seem to like lamb for dinner as much as my family does. Our back fenceline borders the Mesa big game winter range, which serves as a coyote refuge with human presence prohibited during the winter months.
What to do? We have no interest in trying to kill every predator in the neighborhood, but we need our sheep herds to be protected. My family is a group of active shooters (although not especially effective target-hitters I might add) and we allow sport hunters access to go after coyotes. We herd the sheep, see them everyday, and I camp on the lambing ground during lambing season.
But for 24-hour protection, we use livestock guardian dogs, including these two Akbash females pictured below, as well as guardian burros adopted off the range in Nevada. Once we convinced the burros not to kill the guard dogs, they all get along great, and usually erupt into play at least once an evening.
These are very effective predator defense tactics for our sheep. Another defense mechanism with use with both our sheep and cow herds is entirely natural – horns. Our Hereford cows are horned and they don’t like canids. Our Rambouillet rams know exactly where their horn tips are and will slash at anything they deem a threat. Besides, these bad boys look gorgeous out on the range. 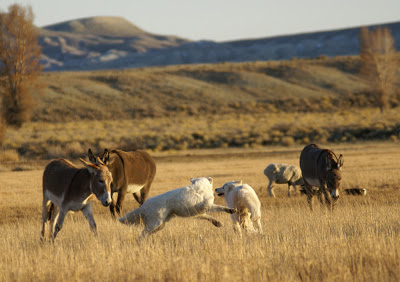 As a falconer who hunts (with a team of dog and hawk) a variety of common and familiar quarries, the notion of what animals might know comes up a lot. Every hunter ought to think about it.

I agree completely with the premises of the post, that animals (perhaps most of them) prove some sense of self when we look closely enough, and that we haven’t looked very closely at most of them.

But two points gave me pause. One is related here:

“A wild dog learning to hunt simply cannot rely on learning to capture prey by small, digestible, simple sequences that then eventually link up into a complete behavior; the way a prey animal behaves is FAR too chaotic and unpredictable to rely on that kind of learning, because the sequence would never be repeated in the same way, would rarely even be begun in the same way. Thus, the animal must make simple plans based on the rapidly changing circumstances, and be able to think in a flexible enough way to try to solve problems as they arise rather than repeating stereotyped sequences of behavior and varying them slightly.”

The point is that humans teach dogs to hunt by simplifying the lessons, breaking them down into small parts and stringing them together. Wild dogs wouldn’t have this luxury, because their prey behave unpredictably. Thus, they must generalize and reason their way through.

This is an argument for intelligence in dogs, and is true I think as far as it goes, but I think it falls short on its assessment of prey.

As a falconer, I’ve been a participant to perhaps 20 thousand pursuit sequences involving at least one predator (more commonly two of two species) and a variety of prey animals. I arrive at the figure by multiplying the number of prey my hawks catch each year by 4, which is a fair assessment of their attack success (25%).

In my experience, which must be something like what wild predators face (since our prey is the same), prey are anything but unpredictable. In fact, I think if prey animals were any less predictable in their habits and escape sequences, most predators would starve within a week.

I don’t think this invalidates the point that dogs are smart. It may in fact support it. But I wonder what it tells us about the prey, and whether or not they are so different than their predators, all of whom are famously “creatures of habit”?

Which brings me to my next small point of contention, or maybe just a point to ponder:

“One of the problems with judging if another animal has something like ‘a sense of self’ is that their minds are highly likely to be RADICALLY different from ours, to the point where they may not even really be comprehensible to us, as our minds are heavily rooted in our own perceptions, instincts, and frames of references.”

Again, from my lay-experience as a falconer, I assume precisely the opposite. My basic assumption when training a hawk and a dog, and indeed when anticipating the behavior of our prey, is that we are all “of one mind.” We will all come to similar conclusions based on similar circumstances. In fact, I don’t think training would be possible were this not so. What basis would we have for understanding each other?

I think we clearly overestimate our training ability as humans—our animals are not nearly so well trained as they are simply correct in anticipating our behavior (provided we are consistent). Training a hawk is really just another way of training oneself to be consistent. Most animal trainers would agree with that, I think.

So there are my observations. Anyone want to weigh in? LabRat—what am I missing here?

“Far better it is to dare mighty things, to win glorious triumphs even though checkered by failure, than to rank with those poor spirits who neither enjoy nor suffer much because they live in the gray twilight that knows neither victory nor defeat.” -Theodore Roosevelt

At Atomic Nerds, LabRat has a fascinating post on dogs and the sense of “self” :

“We used to assume no animal but humans had a sense of humor, until we thought to thoroughly test that assumption, and we found otherwise. We used to think no other animal used tools, until we looked and found multiple examples. We used to think no other animals had culture, until we looked and found multiple examples across many intelligent and social, but otherwise unrelated species. (Obviously not culture as in Shinto and opera, but behaviors, innovations, and mannerisms that varied with local groups.) If the argument I’ve made suggests that other animals than dogs, perhaps some that are actually less intelligent, have a sense of self… well, I’m really not all that convinced we’ve looked all that well.”

If you have a team of falcons you may be able to get a paid trip to Afghanistan.

Anne Price sent this link to serious wolf hunting with eagles. Not for the faint- hearted.

The politically correct set in England want to ban all Latin usage in English, including “et cetera”. One proponent is worried that non- native English speakers might mistake “e. g.” for “egg.”