It seems like spring is a month early this year. The geese arrived the last weekend of February, and the prairie dogs are even peeking out, chattering at me and the dogs.

As you can see from this photo, by last weekend, the snowcover was gone from the sagebrush, and the pronghorn were looking great enjoying the weather. It’s an embarrassment of riches, but all the photos in this post were taken while I was standing in my front doorway.

When I’m in the house writing, I spend a lot of time glancing out the window, and I have cameras at the ready. The pronghorn antelope have been getting so close to the house, approaching Rant the Aziat and snorting at him. He knows he’s not allowed to chase, but he tries to keep them from coming to the yard. It’s a silly truce, because the antelope tease the dog, knowing full well their flight would keep them out of danger.

Now for the sniveling and whining. I spent most of last week in meetings in various towns in the county, driving my son to another town for a necessary trip to a shopping mall (gag, gag), attending social functions, etc. It was a week where I did nothing creative, and my cameras gathered dust. All week was spent with perfectly nice people, but being perfectly nice generally isn’t part of my nature, so of course by Monday morning, I was sick, headache, cold, crud. As I whined to my family from the couch in my flannel PJs yesterday, “See, people just make me sick.” A snowstorm arrived in a swirl, and I vowed to do nothing but read all day.

I felt better today, but had fallen behind on work, so today was spent at the computer all day. That is, until I heard Rena the Akbash raising hell, trying to jump over the yard fence to get out. I put her in the house so I could attempt to photograph the commotion. Someone had killed an antelope buck on the highway in front of the house, and four bald eagles and a few ravens had arrived for the feast.

Somehow, for some reason, two of the eagles went after the antelope herd that had taken up residency here by the house. The herd all bunched together and ran. I didn’t capture it well with my frantic scrambling, but it was pretty flipping cool to watch. The balds were not very serious about trying to take an antelope, and instead continued to play and interact, making their way back to the carcass.

Chas has joined the local volunteer fire department and thinks he may get called to duty during today’s Red Flag alert. Early this morning I saw a couple of Army Blackhawk helicopters headed south to help fight a big fire at Ft. Carson.

Cowboy poets get a fair amount of press – Baxter Black used to be on NPR all the time. I must admit I’ve never heard anything about fisher poets. Maybe I just live in the wrong part of the country.

A new moon has been discovered orbiting Saturn, hiding in one of the rings. That brings the total up to 61, I believe. In grade school, I remember just trying to keep straight that Saturn had eight moons and Jupiter twelve.

People are coming out of the woodwork all claiming to own this 840 pound emerald. Where do I sign up? That’s like 1.9 million carats if my math is correct.

The fact that we even have to have “Good Samaritan” Laws speaks volumes about our modern culture.

Just as conditions seem to have stabilized some in Iraq, the southern marshes are under threat again. Probably just as well that Wilfred Thesiger has gone to his reward.

Some industrial archaeology has unearthed a bottle of the first batch of plutonium, vintage 1944. Someone call the Atomic Nerds.

Booming business, collecting dead people’s debts from bereaved relatives who have no legal obligation to pay them. I’m at a loss for words.

An octopus disassembles a valve in her aquarium tank and floods the Santa Monica Pier Aquarium. Amazing what you can do without opposable thumbs.

I will not argue with the assertion that this is the ugliest cat in the world.

As Connie will be glad to tell you, this horrific horse perched outside of Denver International Airport drives me nuts. Officially known as “Blue Mustang” it is especially obnoxious after dark when the orange eyes light up. I have offered to contribute to a fund to buy C-4 to blow it up. The NY Times tells me today I’m not the only one who feels this way. The thought that I am going to have to look at this every time I go the airport for the next four years is maddening. As I am not a Denver resident or taxpayer, I won’t comment on how much it cost. 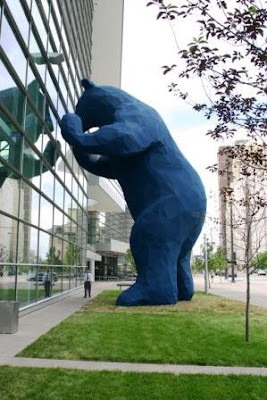 Just to show I’m not totally closed-minded, I want to point out that I have no problem at all with this sculpture of a giant blue bear peering into the Denver Convention Center entitled “I See What You Mean.” In fact, it doesn’t seem to strike sparks like the horse does – I don’t think I’ve heard anyone say they didn’t like it. IIRC the artist made a batch of small scale models of this that were hot sellers at the Democratic National Convention here last summer. I can’t exactly put my finger on why I feel so differently about the two pieces. I’d be interested to hear how you feel about them.

As long as we are on the subject of art at DIA, this rather strange mural inside the main terminal has set off a whole series of conjectures of how it is linked to secret Masonic symbolism, the New World Order, or the extraterrestrial aliens that are purported to live in subterranean chambers under the airport. Some apparently refer to DIA as “Area 52.” The NY Times article alludes to this, but the best rundown I’ve seen appeared in the local weekly Westword a while back.

Frankly, “Dream of Peace” is rather peculiar and if you travel through DIA I’d recommend you take a look at it.

Pluvialis is posting again. Except I just noticed she dropped her nom de blog and is just regular Helen now. Go on over and welcome her back.

This warm spell we’re having came at just the right time for me to get to work on the peach trees.

I hope he doesn’t mind. It might have helped to ask…

But Henry sent some nice photos from our Blogger meet-up last weekend, and I wanted to share. I posted some cell-phone quality videos of the squirrel hunting below; here are better images of the hawking portion of the trip.

First stop, a walk across a reclaimed mine site in search of rabbits and birds. A couple hefty feral hogs leaped up from this stuff, none of it more than knee high, and scared the heck out of us…. they are a little more bear than we came loaded for.

There’s a bird in there somewhere, dog sniffing around and hawk waiting. I don’t think we ever got this one up for another flight.

This one (my new screen wallpaper) captures something about the Harris’ hawk that is difficult to photograph. These hawks are so tame and comfortable in company, their typical photograph shows them puffy and soft. Is it just me, or do most Harris’ hawkers wish their birds would pose more like the sawed-off hawk-eagles they are? Here Ernie is all feet and talons and beak and bad attitude. Something is about to make its last move.