A black bird sits atop the power pole near the highway, and I can hear its persistent call: quork … quork … quork. It’s a raven. What is this call, who is it to, what does it mean?

I recently read Bernd Heinrich’s Mind of the Raven: Investigations and Adventures with Wolf-Birds, a superb read with one style of writing I enjoy a great deal, but rarely encounter. Heinrich’s book provides detailed encounters of specific animals, and while also including assumptions and conclusions, provides enough detail that I can come to my own assumptions and conclusions as well. Detailed nature study (as in, “I saw this once, and these were the circumstances”) of individual animals, as well as for the population/species as a whole, make for fascinating reading, and provide fodder for debate and discussion about context.

David Quammen’s review in the New York Times book review took issue with the things I love about the book, describing it as “an amiable, disorderly book that for all its charm often seems too directly derived from field notes and daily journal entries of the working scientist. Some of the minute-by-minute detail is engaging, some presents meaningful data and some is just noise.”

I can’t help it; I want the noise too, just to put everything in perspective.

Heinrich explains that his quest is to find out what ravens do, “which to me is more important than deciding how to label it.”

In the preface to the book, Heinrich drew me in with his list of reported raven behaviors he found both intelligent and strange: “ravens hanging by their feet, sliding in snow, snow-bathing, aerial bathing, flying upside down, doing barrel-rolls, social flying, and using objects to displace gulls from nests, using rocks in nest defense.”

Other reported behavior included carrying food in the foot rather than the bill, foot-paddling, rolling on the ground to avoid a peregrine falcon, catching doves in midair (Wow!) and attacking reindeer.

While I did not enjoy Heinrich’s Raven in Winter, Mind of the Raven is a book that will remain on my bookshelf. 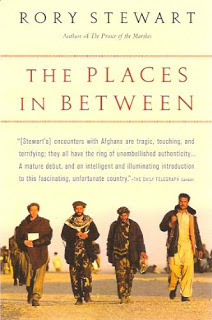 Rory Stewart’s walk across Afghanistan three months after the Taliban’s exit from power is described in his book The Places in Between, an engrossing read that I devoured over a recent weekend. I agree with the Christian Science Monitor’s characterization of the book as “wryly humorous, intensely observant, and humanely unsentimental.”

I am interested in the people of Afghanistan, and was fascinated by Stewarts’s encounters with them, but I was even more intrigued with this book for several side issues that I have a keen interest in: primitive guard dogs and wolves.

Not long into his journey, Stewart was given a dog to accompany him – a mastiff-type guardian animal, similar in looks to what we recognize as a Turkish Kangal, with docked ears and tail, seemingly about the size of a small pony. Throughout the book, Stewart dribbles little anecdotes about the dog that I found typical of these guardian dogs and their temperament, and these finds only increased my enjoyment of the book.

Villages keep these guard dogs to protect their herds, and their people. The dogs are known as fighting dogs, because they fight wolves.

A local man who escorted Stewart through a mountainous region of Afghanistan carried a gun on the journey. When Stewart asked why, he was told: “Six months ago on that slope on my way to vaccinate some of the sheep on that hill, I came across the clothes and then the leg of a friend who had just been eaten by a wolf in the middle of the day. Two years ago, five wolves killed my neighbor at eleven in the morning.”

Our continued legal morass of wolf management in the United States is incredibly so far removed from other people, other cultures, who live with wolves.

This is the best book I’ve read in a long time. 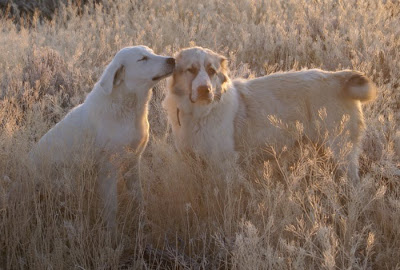 Whenever you put a herd of sheep into a set of pens or corrals to work them, that means that there are grumpy guard dogs hanging around outside the pens, and happy working herding dogs inside the pens. The photo above shows a young male dog trying to suck up to Vega, top dog.
The photo below is Vega’s sister Helga, who is very grumpy that someone is messing with her sheep. She sulked around outside the pens all morning last week as we sorted and loaded lambs. 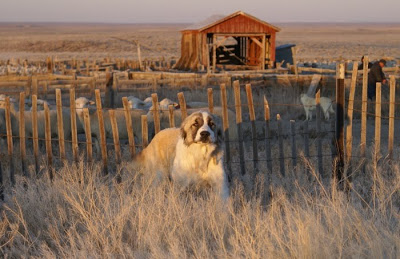 Helga did come to me to be comforted. What a pretty face. You can see the frost on the vegetation covering the ground around her. 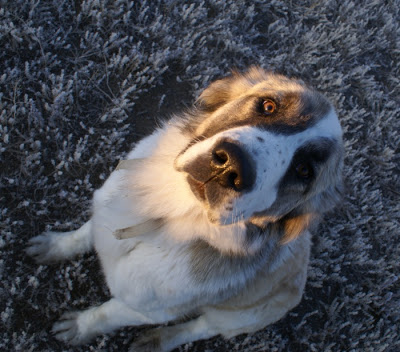 This cutie is a bearded collie, and he is desperately looking for his friend, the Nepalese herder Ramu. The dog quickly jumped over two fences to get back with his work partner. 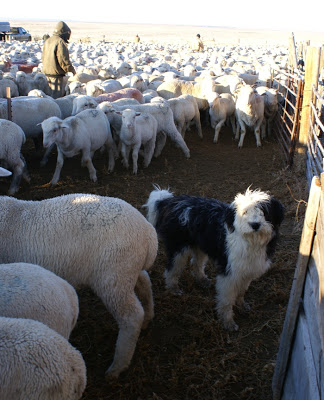 This is a border collie/bearded collie pup, working with Prem. This pup lives to work, and barks with excitement as he works the herd. 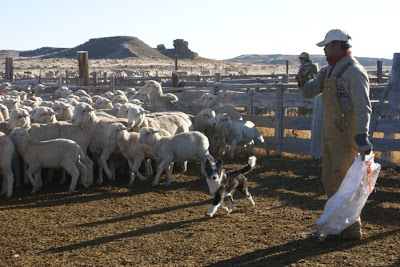 These two dogs are in a stand-off and staring contest with the ewes. The dog won. The dog with lots of white is another bearded collie cross. They are great dogs for working sheep since they are rather “soft mouthed” with sheep, something I appreciate.

Jim and I once again had the pleasure of being at the right place at the right time today, as part of the Sublette pronghorn antelope herd came through in its major fall migration. This bunch had just swam the New Fork River, and came through the meadow next to our sheep herd. The burros bunched the sheep into one group and started moving them out of the way, while the dogs stayed between the two herds.

Beautiful animals – click on the photo for a larger view.

I helped ship several thousand lambs off Sublette Flat one morning this week. The day began with the trucks arriving at daylight.

The lamb and ewe flock enter the corrals. Having ewes in the herd helps to keep the lambs calm while they are handled. 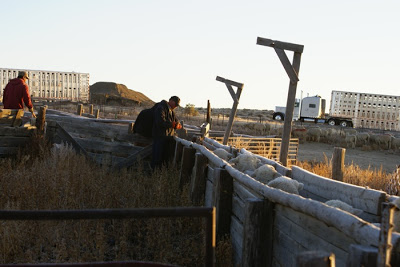 Ewes and lambs await the push toward the front. 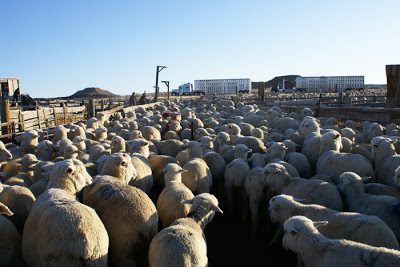 Mystro for an orchestra of sheep: ranch owner Pete Arambel: 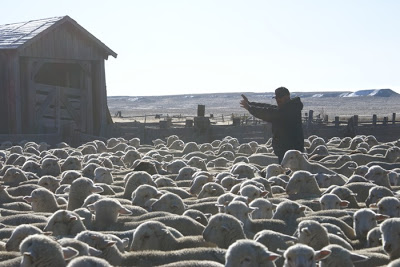 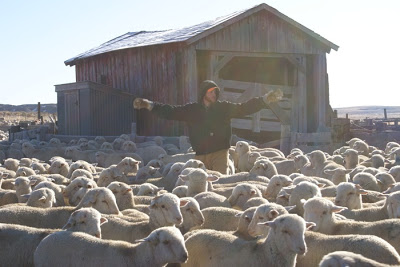 This is Prem, who is the ranch foreman. He is from Nepal and we’ve got to know him over the years and really enjoy the opportunity to talk with him about life in Nepal.

This is Ramu, who is also from Nepal. I loved watching him with one of the bearded collies. Any time Ramu would jump over a fence to work in a different section of the pens, his dog was frantic until he could rejoin his partner. 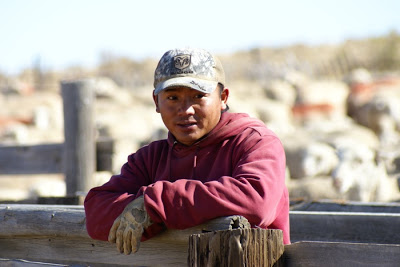 Before the trucks can leave with their loads, the brand inspector and veterinarian fill out the brand and health inspection reports they must carry. 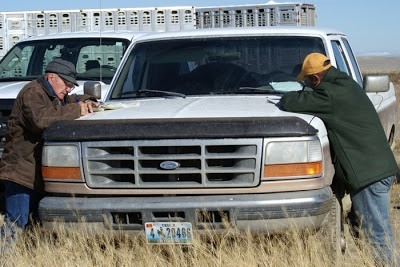 So how do you count several thousand lambs? You put the herd onto one side of a corral, with a line of men standing in front of them to hold them there. The counters stand in the middle of the line, and step back a little as the men on the ends take a step forward. This puts pressure on the edges of the herd at the same time the counters have eased up, providing a path for the lambs to escape between them.

The counters stand in place as the lambs trickle between them, and if the lambs start running too fast, they put up an arm or step forward to slow the line of sheep down. It’s an ancient way of doing things, but these days it’s also called low-stress animal handling. It’s the way the Arambel sheep family has done things for 100 years here on their outfit in western Wyoming. 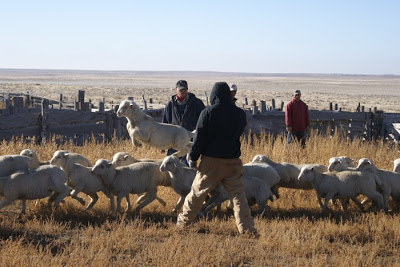 We shipped lambs this week, and I was pleased to see that two of the Aziat (Central Asian Ovcharka) pups I raised were with the lamb herd. Our bearded collie, Abe, had sat in the truck all morning as we loaded lambs, staying out of the way of unfamiliar dogs, people and big trucks. As we finished up, I let him out, and he was immediately greeted by the big girls he had help raise. Although they outweigh him three to one, they still let him be the “big dog.” I love this puppy-like submissive behavior offered by the girls in these photos, and Abe’s “I am such a stud dog” posture. 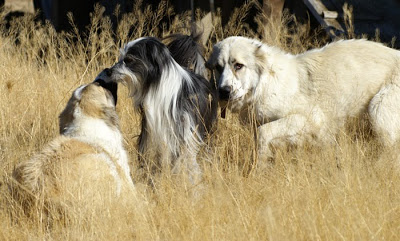 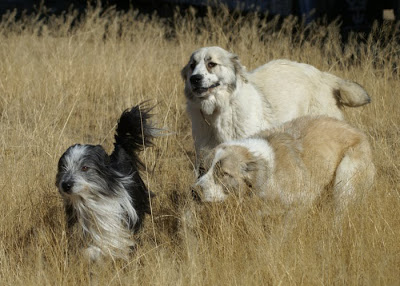 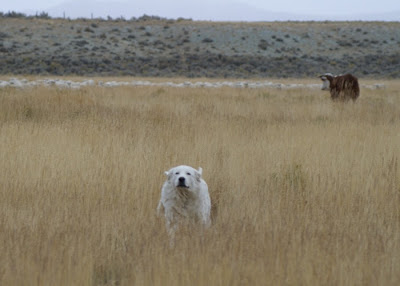 I took this photo of Luv’s Girl on Saturday afternoon. I like the conveyance of texture in the photo. But yesterday afternoon, the weather changed. Here’s the view from the same meadow this morning: 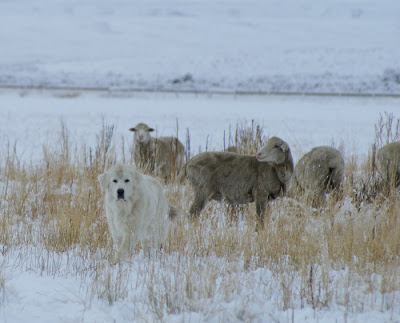 While none of our animals are even slightly bothered by the snow, this little mourning dove seemed peeved with being wet: 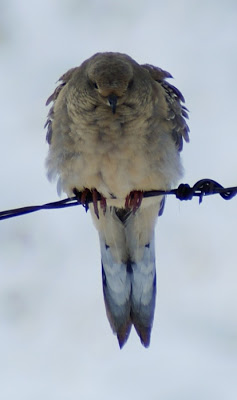 This prairie dog didn’t seem to mind either: 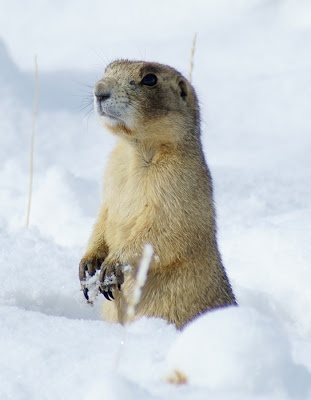 Although we received about four or five inches of snow, it is a pleasant 18 degrees. Most of the roads that had to close overnight are opening back up. We were supposed to load lambs onto big trucks for our lamb sale this morning, but that got postponed for a day or two while the weather settles. 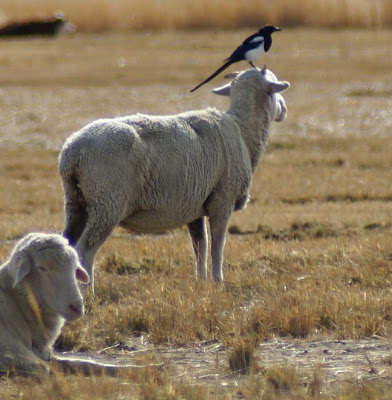 Many of our ewes seem to enjoy the birds that co-exist with the herd, from small songbirds to cowbirds and magpies. Not all of the ewes will let the magpies use their heads as perches, but some do.

We’ve entered my favorite month. Happy October to everyone.