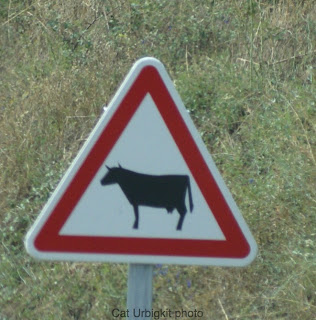 I promise I’ll soon be posting about our livestock protection dog research and travels, but in the meantime I’ve got a few other rather entertaining side notes to share. As we traveled in Spain, I noticed there were cautionary signs indicating that cattle were grazing in the area, and those signs included the shape of a rather attractive Spain bull-fighting type of cattle. Should of snapped a photo, but didn’t.

The Portugese cattle signs were very different, as the photo above indicates. But where it got really funny was throughout Turkey. Various areas of Turkey had cattle signs demonstrating entirely different cattle physiques, some emphasizing milk production, while others were more beefy. Sorry the photos aren’t clear, but they were snapped through a windshield at a high rate of speed (Turkish drivers are another story). 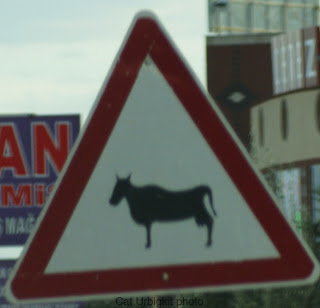 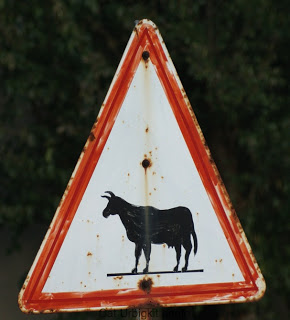 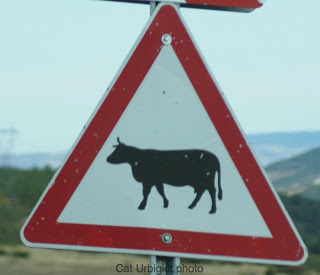 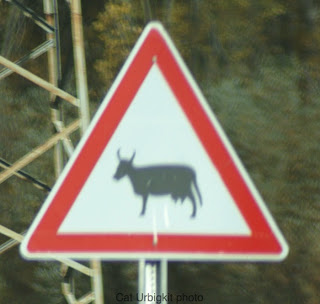 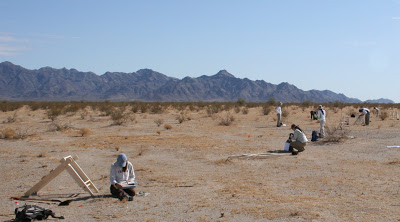 I spent about three weeks last month doing some fieldwork for a solar power project in Riverside County, California. The project is located near a large playa lake west of the town of Blythe. Specifically we were trying to determine whether seven of the prehistoric sites that we’d recorded during earlier phases of the project had buried deposits under the artifact scatters we had seen on the surface.
As the project is on BLM land, it was the lead agency giving us our permit for the research. Under BLM rules we were only allowed to do “limited testing” which restricting us to digging shovel test pits (STPs) in systematic arrays over the site area. You can see the crew setting up to dig a line of STPs across a site in the picture above. 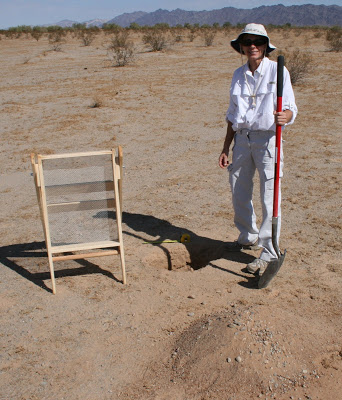 STPs are pretty small, 30 cm diameter, and are dug in 10 cm levels, with all the spoils run through the screen to catch any material you might not have seen while digging. We dug them in transects across the sites at 10 meter intervals. They are a way to get the bare minimum of information about subsurface desposits at a site – a veteran archaeologist friend of mine always refers to STPs as “peep-holes into the past.” We had a geologist do a geomorphology study of the project area, and knew from that work that the Holocene deposit in the area where we would be likely to find archaeological deposits was actually quite thin – maybe 30 – 40 cm at most. 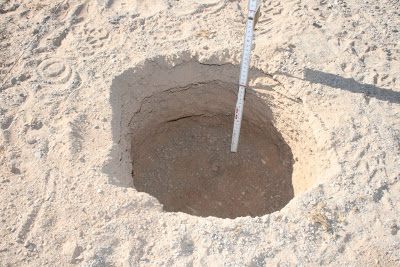 The Holocene layer is underlain by a buried late Pleistocene soil that is 30, 000 years old or older. It has a distinctive orange color you can see in the picture above. You can also see how shallow it is. We ended up putting a little over 300 STPs total into the seven sites. 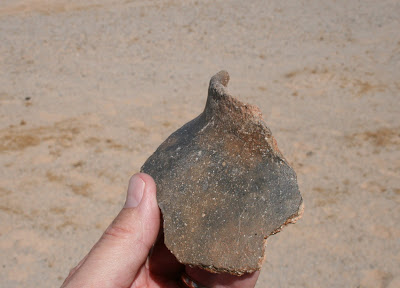 To be perfectly honest, our STP exercise was pretty much a bust, with only 8 STPs out of 310 showing any results at all. These were all isolated single flakes at shallow depths and none showing any evidence of cultural deposits. That didn’t surprise us too much, though some people at the agencies issuing permits for the project had thought otherwise before we started work. The results will limit the amount of mitigation work our client will need to do to procede with the project.We did see, or actually revisit, a lot of interesting stuff on the surface of the sites. For example, the big rim sherd in the picture above comes from a constricted mouthed jar. Its characteristics keyed out to the Colorado Beige type, that dates from the Patayan I period, AD 700 – 1000. It was likely made in the Colorado River Valley about 25 miles east of the site. 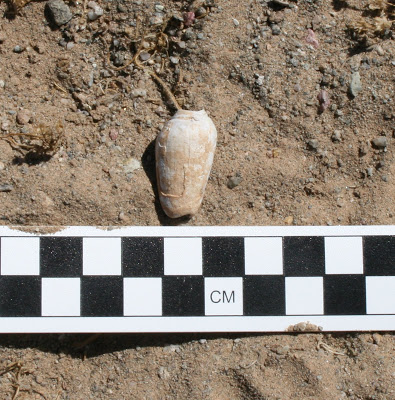 This is an Olivella shell bead. California archaeologists have come up with a comprehensive bead classification system to describe the bead styles. In this system this spire lopped bead is known as an A1e. Many of the bead styles have been dated from radiocarbon assays in sites (like ceramic or projectile point styles) and serve as useful “index fossils” for dating sites. Unfortunately people starting making the A1e style about 8,000 years ago and kept on until European contact so it’s not very useful for that purpose. 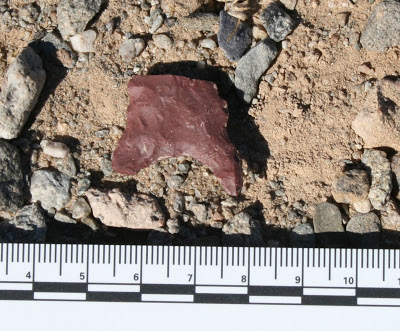 This dart point base comes from the Pinto series, and dates between 3,000 and 5,000 years ago. 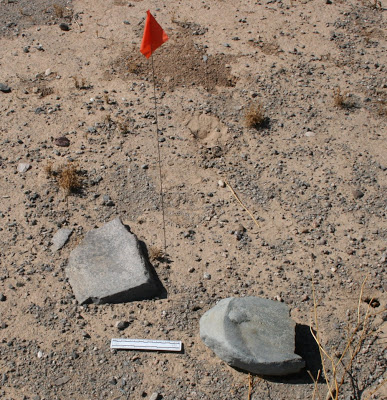 Most of the sites had grinding implements for seed processing, like these two metates still sitting on the desert pavement on one site.

Though it was late October, it was still over 100 degrees every day. We rigged up this shade so the crew could get a break from the sun at lunch. 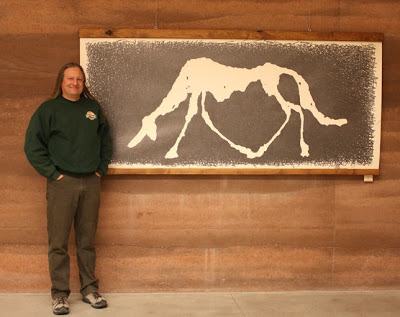 I recently had the pleasure of attending the opening reception of a new group art exhibit at the Sublette County Library in Pinedale, Wyoming. The “Common Ground Work” exhibit brought together six talented local artists with a wide variety of mediums, but one particular piece kept drawing me back: David K. Klaren’s graphite “Stray.” The piece, which is a wall-filling 46 x 97 inches, is magnificent, and was inspired by Alberto Giacometti’s 1951 dog sculpture.

It was reported that Giacometti said: “One day I was walking along the Rue de Vanves, in the rain, close to the walls of the buildings, feeling a little sad perhaps, and I felt like a dog just then. So I made that sculpture. The sad muzzle has a likeness to the Saluki.”

Klaren’s “Stray” is available for purchase from his Dire Wolf Studio. For more on his work, check out the Pipeline Art Project.

From Tim Gallagher in Ithaca: 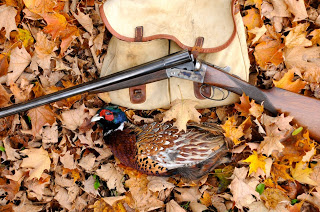 Suburban Bushwhacker posted some photos of a skull that he wanted his readers to guess at.

It was a European badger. I know because long ago, after were were unable to stop in what the English call a “roundabout”* to retrieve a carcass, zoologist- artist Jonathan Kingdon gave me a skull of one with the beginnings of muscles that he was building out of plaster of Paris. I wonder if I could have even gotten it home these days?

At least one reader suggested– jokingly?– “black bear”. Years later Libby and I, on our first spring hike into the Magdalena Mountains, found the skeleton of a winter- killed bear melting out of the snow at about 8500 feet.It was huge and seemed very old, with worn teeth. 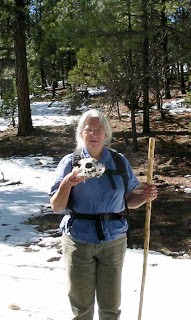 They are very similar but for size. 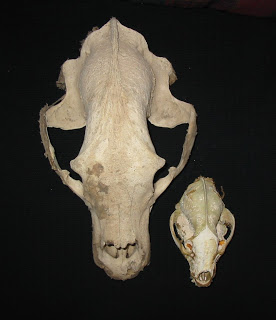 And here is one of Jonathan visiting Tucson a few years ago, with Lashyn. He is living mostly in Rome now and continuing to do writing, science, and art. I will write more on him and his work later. 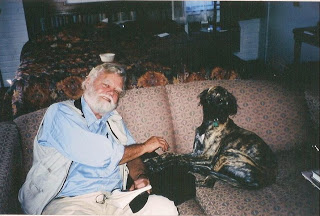 *New Englanders call them “rotaries”. New Mexicans don’t have them. 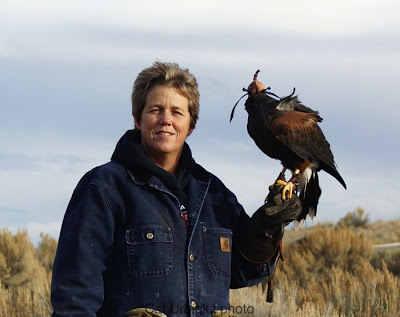 Yesterday afternoon as I was returning home from visiting a friend, I turned down a county road that traverses through the sagebrush uplands next to the New Fork River and noticed a pickup truck out in the sage, with two men near the tailgate, with a bird dog. Intrigued, I drove by slowly, and finally one of the men moved just enough for me to get a glimpse of a peregrine falcon in the back of the truck. I stopped my truck and backed up, shutting off the motor to inquire if they were about to be in pursuit of sagegrouse. When I mentioned that conditions were excellent for a perfect hunt, with the except our thriving golden eagle population, the men invited me to have a look at their birds. Not wanting to cut into their hunting time, we talked briefly, and I invited them to bring their Harris’s hawk to my place to pursue jackrabbits if they were so inclined the next afternoon.

I was happy when my cell phone rang at lunchtime today, with the falconers ready to take me up on the offer. Vahe D’Ala and Gary Beese of California arrived a few minutes later, ready to fly various falcons to the lure, and to hunt the Harris’s. It was an absolute blast. I love watching the peregrines in those dizzying insanely fast stoops, but I also really liked trying to kick up jacks for the five-year old female Harris’s. I’d never before met a Harris’s, let alone watch one hunt, so this was a thrill for me. 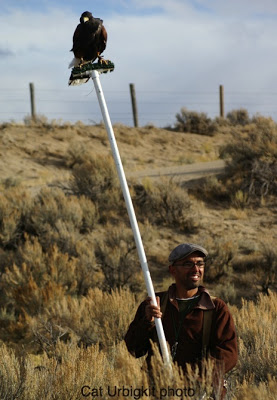 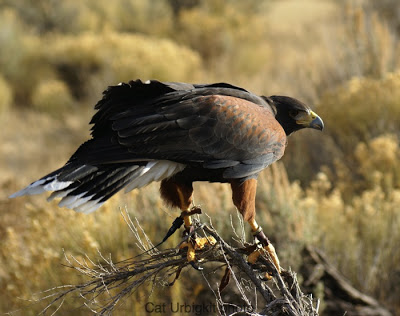 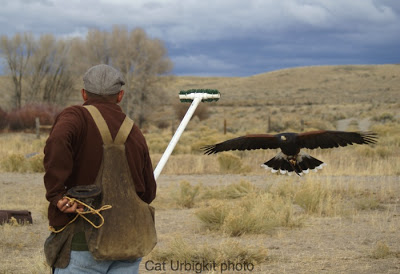 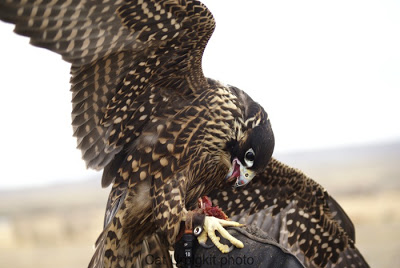 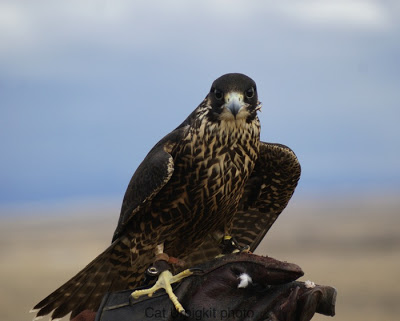 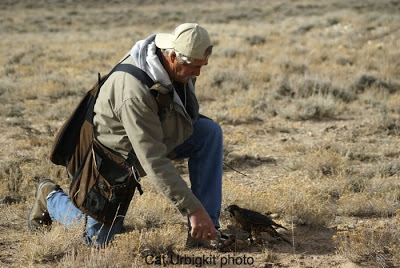 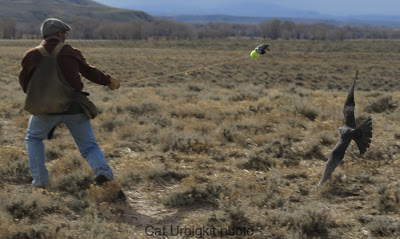 Thanks so much Vahe and Gary, for a wonderful afternoon. You’re welcome back anytime.

Rebecca O’Connor’s Lift, her literary falconry memoir and one of the best falconer’s memoirs ever written, had such good press I thought it would automatically be come a success (this despite my having written to her about “… terrific reviews, indifferent agents, incompetent publishers, [and] few sales…”). But NOOO. She has sold only 411 copies.

This is a disgrace, and at the very least an instance about how we no longer know how to market or identify good books “with trees in them”*– a subject I will have more to say about later.

Meanwhile Lift is the kind of book any Querencia regular will love– if you read the first paragraph, you will be hooked. If you don’t have it already, do yourself and Rebecca a favor: go here and order it.

*Norman MacLean’s A River Runs Through it was rejected by virtually every NY publisher, one of whom complained “This book has trees in it!”

A conversation between the late Jack Mavrogordato, old school English falconer (he knew T H White, who described him as “a charming man, approximately five inches tall…”), and the more ancient Major Allen, about the still more ancient E B Michell, past master of the merlin, ca. 1976, as recorded in the English Falconer:

M: He was an amateur boxer, wasn’t he?

A: Light, middle, and heavyweight boxer of England: he boxed all three weights. He used to despise gloves, he said it was like cockfighting without using spurs. He was extraordinary.

M: How we’ve changed from those days.

A: He was a Senior Classic, he was a very clever man. He’d eaten rats at the Siege of Paris, he codified the laws of Siam, he wrote a book on curries.

M: I never knew that.

A: And of course his brother was one of the famous masters of Rugby and was murdered.

From Charles Darwin’s “pro” list in favor of marriage when he was a young man:

“A constant companion, one who will feel interested in one (a friend in old age)– object to be beloved and play with.”

Pop song constantly playing on Zimbabwe radio when I was there many years ago:

You will find her

[In hounds, hawks, arms, and love, for one joy, a hundred sorrows]

For years I have kept what the English call a commonplace book, a place to write down quotes. I gave it up a few years ago, but have started up again. Re- reading it (or them; I have several volumes), I have discovered things worth adding to the blog, from the whimsical to the serious. I’ll spread some over a few posts, and maybe return later for more samples.

First, two which served as epigrams for an unpublished novel, from the English “travel” writer James Hamilton Patterson and the late novelist Sybille Bedford:

(From JHP): “Virtue and the wild share no common universe.” (Get your mind around that…)

(From SB): “I became intoxicated by their company, and was hard put to keep up, pretending that I, too, had always lived dangerously.”