Merry Christmas and Happy Holidays from all of us here at Querencia blog!

Steve writes that he is safely back home from Turkey and in his words, “…ALMOST un- jet lagged.” He warns that blogging will be light for a while due to his continuing computer issues. He says, “Meanwhile 106 Turkish photos of all manner of things– dogs,domestic pigeons, landscape, ibises, flint cores– are in the big computer…” that he can’t use to communicate with the internet. We look forward to seeing them soon when he gets this sorted out.

A trout with two mouths caught in a Nebraska lake. I’ll leave all the bad puns to you guys.

Archaeologists in Australia have discovered a set of prehistoric footprints that date to the late Pleistocene (19,000 – 23,000 BP) on a lakeshore in New South Wales. There are over 450 footprints, another “frozen moment” in the past. They sound very interesting, ”We see children running between the tracks of their parents; the children running in meandering circles as their parents travel in direct lines,” as one researcher said. Can’t wait to see the pictures. 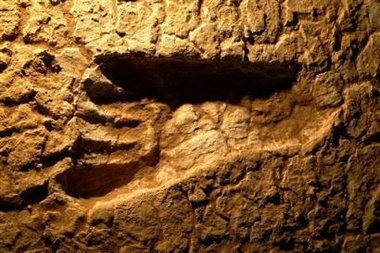 That didn’t take long. You can see some pictures here.

Marine biologists have discovered that contrary to their earlier assumptions, some species of squid are actually careful and attentive mothers. Sorry, but I saw “mommie deepest” in the photo caption and had to use it.

One of the events that has fallen into the “memory hole” of American history is the sequence of earthquakes from December 1811 to March 1812 that occurred in the central Mississippi River valley. These quakes (and the fault that caused them), named after the Missouri town of New Madrid, were the most powerful in continental US history, with three major quakes around magnitude 8, and hundreds of aftershocks in the 6 and 7 range. By comparison, the 1994 Northridge quake that did so much damage out here was a 6.7. Death and destruction was limited because the area was not heavily settled yet, but the Mississippi River ran backwards several times, whole towns fell into the river, and large areas subsided as much as 20 ft. The quakes caused widespread soil liquifaction and “sand volcanoes” spewed sand and soil from rents in the earth. More detailed accounts can be read here and here. This isn’t commonly known, even among people who live in this part of the country.

We all think of California as the place for earthquakes, but this area in the lower Midwest has had worse in the past. This map from the USGS locates historic quakes and defines the New Madrid Seismic Zone. 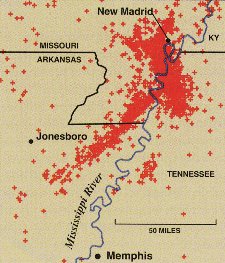 I was reminded of this when I read this article in Archaeology magazine (sorry but it’s the abstract, not the full article) that tells how Missouri archaeologists are cooperating with geologists to use evidence of earthquakes in archaeological stratigraphy to date prehistoric earthquakes. I really liked this picture from the article showing one of the “sand volcanoes” cutting through an archaeological profile and scanned it for you. 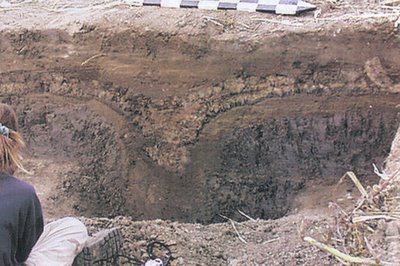 These methods have helped geologists to write a seismic history of the area, showing that the New Madrid Fault has had major earthquake events about every 500 years. People living there now aren’t particularly well-prepared if the next one comes soon.

If you see medallions of australus on the menu, you’ll know that they’re serving ‘roo. Australus is the winner of a contest for a new name for kangaroo meat.

Somehow I don’t think the aborigines will care.

This news release talks about two separate genetic analyses carried out on a 28,000 year-old Siberian mammoth preserved in permafrost. One studied mitochondrial DNA while the other studied DNA from the cell nucleus. The researchers using mitochondrial DNA found that “…the woolly mammoth was more closely related to the Asian than the African elephant, but that the divergence between the three occurred over a short time.” Those using nuclear DNA say that “… their work showed the mammoth’s nuclear DNA was 98.5 percent identical to nuclear DNA from an African elephant.”

The release treats these as mutually exclusive positions, but not enough information is provided to tell if this is strictly true – very frustrating! I guess we will see when the articles come out and we can compare them.

But it is very good news that we have good genetic material retrievable from frozen mammoths and that scientists are making good use of it.

The Los Angeles Times notes as does the New York Times, the discovery of a wall unearthed in construction near Battery Park in New York City. It was found 10 feet under the present ground surface and artifacts associated with it seem to indicate its construction in the late 17th and early 18th Centuries. It is likely associated with the fortifications associated with the artillery battery whence the park gets its name. The LA Times piece points out that contrary to popular opinion there is a lot of buried historic archaeology in built environments like New York.

I’ll just note in passing that the archaeologist mentioned as having examined the wall, Joe Schuldenrein, is a old colleague who is one of the best geoarchaeologists in the cultural resources business.

The San Francisco Public Library is going to display the manuscript of Jack Kerouac’s “On the Road” this spring – at least a portion of it. This book has always been a sort of literary legend as it was written on a continuous 120 foot-long roll of paper fed through a typewriter in a three-week burst of energy. Of course, Truman Capote said of it that Kerouac hadn’t written a novel but merely typed one. The library is going to unroll 36 feet of it for the exhibit.

I have always enjoyed “On the Road” though my favorite of Kerouac’s is “The Dharma Bums.”