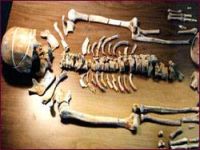 Since the anthropologists won their lawsuit in 2004 and obtained the right to study Kennewick Man’s remains, I have been waiting for the studies to come out. In today’s press release it appears that Doug Owsley of the Smithsonian is first out of the gate. Here’s a quick run-down of some findings.

This was an intentional burial. He was placed 2-3 feet below the original ground surface, and the burial was what we call “extended” or laid straight-out on his back. He was buried parallel to the river, head pointed upstream.

It was previously reported that a projectile point was imbedded in his hip and it was provisionally identified as a Cascade point. These are lanceolate points that are pointed at each end. A CT scan showed that it was not a Cascade, but some other type of stemmed point. That wouldn’t be unusual to see at this time period (9300 BP) either. Also interesting is that the point didn’t kill him – it was a healed wound! Owsley couldn’t find a cause of death in the skeleton, but did see evidence of lots of injuries. As Owsley said, “…this guy was tough as nails.”

One question that occurs to me is if they have been able to obtain any DNA from the remains. It’s possible – I saw a recent study that obtained some from a burial in Alaska a thousand years older than Kennewick Man. We’ll see.

Also I have not heard if there is any move to try to work at the original find site. The Corps of Engineers covered it with tons of rock, hopefully it sealed it in and didn’t destroy it. It would be good to know if this was an isolated burial or part of a larger site.