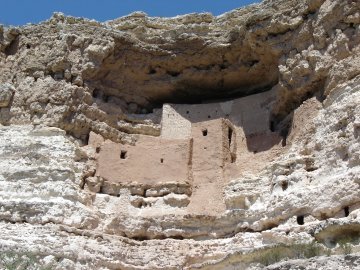 Of the prehistoric Southwestern archaeological cultures the one that I have the least personal experience with is the Sinagua. The Sinagua were located in the Flagstaff, Arizona area from about AD 1100 – 1400, and were a sedentary agricultural people. They were located physically between the three great Southwestern cultural traditions, the Hohokam, Anasazi (Ancestral Pueblo), and Mogollon and took some material culture elements from each of these. It was originally thought the Sinagua were attracted to the area by positive effects that volcanic ash from the 1064 eruption of nearby Sunset Crater had on agriculture. More recent research seems to discount this. They abandoned the area around 1400 for unknown reasons.

Since we found ourselves in the middle of the Sinagua home territory during vacation we took a day to visit three of their better known sites. The beautiful cliff-dwelling in the picture above is Montezuma’s Castle. Early Anglo settlers in the area were erroneously convinced that it must have been built by Aztecs. It is part of a settlement complex in a small valley that included another cliff-dwelling (unfortunately destroyed) and pithouse dwellings on the valley floor.

As I said earlier, the Sinagua took elements from neighboring cultures. Cliff-dwellings are an Anasazi pattern as are the surface pueblos they built elsewhere, like we saw at Tuzigoot in the nearby Verde Valley. Their utilitarian ceramics were brownwares like the Mogollon, but their decorated pottery was black-on-white like the Anasazi. The Sinagua sometimes built Mogollon-like pithouses and like the Hohokam played a variant of the Mesoamerican ball-game. 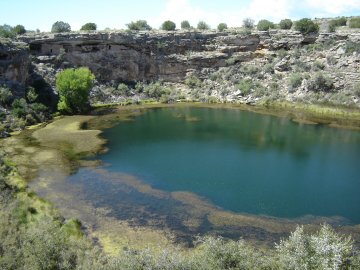 This is Montezuma’s Well, about four miles away from the cliff-dwelling. It is a collapsed limestone sink-hole spring that flows 1.5 million gallons a day and was a magnet for prehistoric settlement. If you look closely on the left side of the photo you can see some masonry rooms tucked into an overhang above the spring. There was a masonry surface pueblo on the rim of the sink-hole where I took this picture. 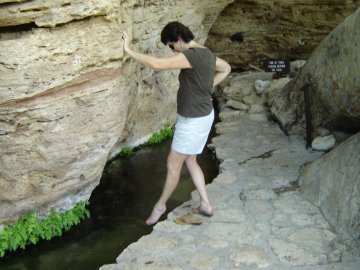 Here’s Connie cooling her tootsies in a Sinagua irrigation canal (with modern sidewalk) that captures the flow from the spring’s outlet. A refreshing spot in a hot, dry location now and a thousand years ago.