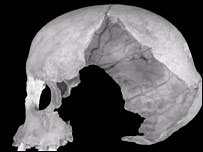 The BBC reports that the question has come up again as to whether early modern humans and Neanderthals, whose occupation of Europe overlapped, interbred. This new speculation is based on radiocarbon dating and re-examination of 30,000 year old skeletal material from a cave site in Romania. The bones (cranium shown above) are said to show diagnostic features of both modern humans and Neanderthals.

I would think that a lot of this can be sorted out by the project to map the Neanderthal genome that we blogged on last summer. Professor Clive Gamble, quoted in the article, also says that the DNA evidence should tell the tale at the end of the day and that we should be cautious about the evidence for interbreeding. Neanderthal DNA recovered so far seems to show that our evolutionary lines diverged 600,000 years ago. My favorite quote from Gamble: “We’ve known for some time that the earliest modern humans in Europe are a funny-looking bunch”.

Steve’s take on this:

I love this: “The question is whether these robust features show that they were up to no good with Neanderthal women behind boulders on the tundra, or whether they were just a very rugged population.”

Rugged to be out shagging on the tundra I should think…