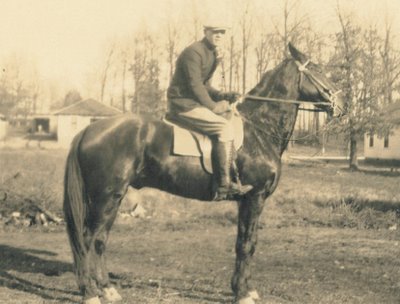 I couldn’t think of a single contemporary “hook” for use of this photograph, but I like it so much I just had to put it up. This is my grandfather, Travis Reid, in a picture taken in Jonesboro, Arkansas. From his appearance and its placement in the album, I believe this was taken in the winter of 1921-22, when he was 21.My grandfather loved horses and boats and fishing. Though he was born in 1900, he always kept a very 19th century mind-set. My father (his son-in-law) still jokes that air-conditioning and the outboard motor on his fishing boat were the only 20th century inventions that Mr. Reid really approved of.He was a fine man and I was lucky to spend a lot of time with him. He taught me how to fish, gave me my first canoeing lessons, would always toss a baseball, and patiently answered my myriad questions. He took me on trips to the Ozarks. We went fishing at his favorite spots in the lowlands west of Crowley’s Ridge: Cache River and Portia and Shirey Bays, horseshoe lakes on the Black River. One quirk: he never used my name when he talked to me. It was never “Reid”, but always “Grandson” or “Old Boy”. In the 27 years we shared I never even thought to ask why.You can tell from this picture that Travis Reid was a sharp-dressed man. Look at that raffish cap and the hacking jacket. And dig those boots!

12 thoughts on “A Horseman”