The petroglyphs Reid blogged about below put me in mind of the “Sun Head” figure at the Tamgaly site in Kazakhstan, below. Could it be a shaman figure? According to a Kazakh brochure, other figures might be as well. “Unique representations of ‘magic personages’ can be found, dressed up in animal skins with wolf tails and the extremities of the hands crooked in spirals. But the brochure says that what it calls “a deity with a round aura around the head” is missing. While some have been stolen and allegedly shipped to Japan– I never could find the dog and ram photographed by archaeologist Renato Sala, for instance– this one was obviously there!

These are from the oldest, Bronze- Age group, along with hunters, dogs, horses, and even sex. 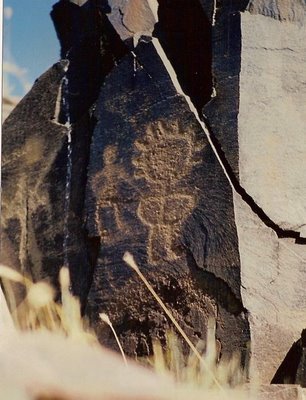 That’s a great petroglyph, Steve! Shamanism has deep roots in Central Asia and Siberia. Some of the classic ethnographic descriptions of it come from here and typically, the shaman uses a drum to induce the trance. Studies have shown that beating the drum at a certain frequency causes people to go into the trance state. The “swirling” hands, the feeling of extra digits, and the swirling feeling around the head that you mention are common images in shamanism world-wide. 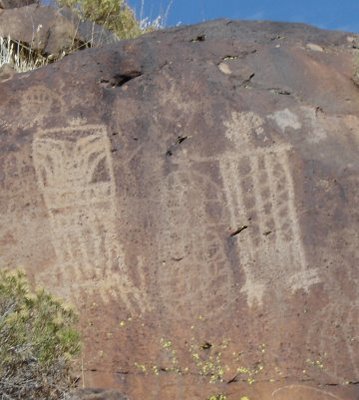 Here’s another Coso petroglyph showing the swirling head effect to accompany the ones shown in my original post. Do you recall seeing any geometric designs that might fit with the “entoptic images” that Whitley and others have talked about?

Bronze Age would certainly fit – I imagine that’s about 2000 – 500 BC there. Dave Whitley gave a paper at the Society for American Archaeology meetings in 2005 where he said that the earliest archaeological evidence in Asia for shamanism dated to about 8,000 years ago. He believes he has rock art evidence for shamanism here in North America that he can date back to 12,000 years ago. He thinks it is possible that shamanism was invented in North America and that the practice traveled back across the Bering Strait to Asia. Certainly a provocative theory, but I thought it was quite a reach.