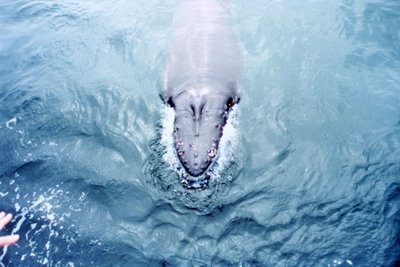 One interesting thing you can easily do here in Santa Barbara is whale watching. Gray Whales, Blue Whales, and Humpbacks all migrate through the Santa Barbara Channel at various times of the year and there are a number of boats out of the harbor here and down in Ventura who will take you out for half-day tour. We try to go once a year or so. You can also often see them from shore if you keep a sharp eye.

I was rummaging around in my picture files and found found these shots that I took on a boat outing three or four years ago. On this particular day, the boat was “mugged” by three Humpbacks, who spent about half an hour bobbing around the boat engaged in various antics. The one in the picture above was so close that I probably could have touched him if I had laid down on the deck and reached out my arm. 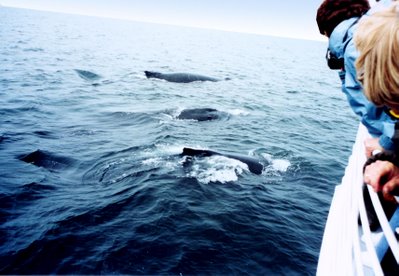 Gray and Blue whales don’t seem to want to engage in these interactions and tend to just push on past the boats. Humpbacks do all sorts of things. These three did lots of big tail-slaps. They also did what is called “sky-hopping” where they sort of tread water to get their eyes above the water’s surface and watch the boat. One of them also breeched about 100 feet from the boat – shot completely out of the water to a height of about 10 feet – and crashed back down into the sea. I of course, watched in amazement with my mouth open and my camera idle in my hands.At one point, the three whales came up on the up-wind side of the boat and spouted – exhaled actually. The spray drifted over the boat and it was my first encounter with whale breath. Imagine the smelliest, nastiest, most sulphurous fart you’ve ever smelled with strong overtones of rotten fish. That is whale breath! 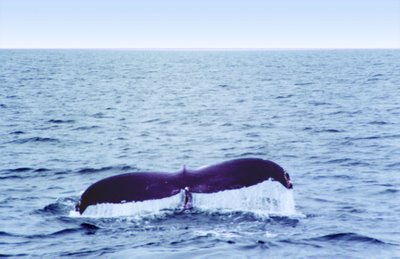