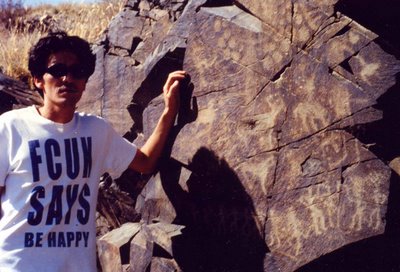 A while back Steve and I posted on some common features that we had seen with regard to representations of shamanism in rock art. I shared pictures from Little Petroglyph Canyon in Inyo County, California, and Steve showed his from the site of Tamgaly outside of Almaty in Kazakhstan.

Steve sent me this picture of a petroglyph of a line of dancers that he took at Tamgaly. You can see them in the lower right corner of the image. 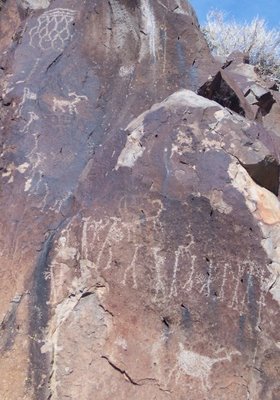 It immediately reminded me of this line of dancers that I had seen in Little Petroglyph Canyon. If you look closely you can see that this line of stick-figures is pecked into two faces of rock and wraps around the corner of the exposure. Accounts of shamanistic visions often describe a dance or ceremony where the shaman receives his power – all part of the trance as the shaman is alone. Another interesting point is that the dancing figures are very small. A common condition reported in the shamanic trances is the perception of very small hallucinations – “Lilliputian hallucinations.” Perhaps the figures’ small size is reflective of that effect.