Grouse leks are traditional breeding grounds that are fairly large open areas surrounded by sagebrush. Generation after generation of grouse use these traditional sites.

This morning, I went to what is usually a very large sage grouse lek to find only about 60 birds on the vast breeding ground. Last year there were a few hundred birds, and about two weeks ago, we flushed about 400 birds from the area. But since then, there was a snowstorm that dumped a lot of snow, and the lek is back under snow. I’m a few weeks early for peak lek activity, and breeding will take place through April.

It was cold this morning (just below zero) when I arrived, and parked away from the lek. I planned to walk in to photo range, but the snow was too deep, and when I tried, the snow crunched, making my tip-toeing sound like elephant stomps. Fearing I would disturb the birds in already energy-draining situation, I gave up and went back to the truck to watch and listen to the birds from afar. As the sun started to rise, I could see that as the grouse puffed the air sacks in their chests, they also released little clouds of steam from their beaks. First time I’ve seen that, so I really started to pay attention.

As I turned to leave, I noticed there were more grouse out in the thermal cover provided by thick stands of sagebrush. I was driving the noisy flatbed GMC feed truck, which emits a low rumble while it idles (teenagers love it), but was trying to be quiet. I saw two male grouse next to the road, and one wandered away into the brush, but the other stayed close.

I shut off the truck to watch, and the second bird started to leave. I turned the truck back on, and the noise attracted the bird, as he spun around to challenge the truck. He strutted and puffed out his air sack on his chest numerous times, making a drumming noise, tail feathers fanned out behind him. When I shut the truck off, he would calm back down and start to walk away, but if I revved the truck back up, he pranced again. Apparently the noise of the truck must be at the correct decibel level to be of interest to the bird – at least this individual bird.

I watched this male sage grouse for about an hour before leaving. The bird remained, obviously winning the battle against the GMC for breeding rights to that territory. What hen could resist something that adorable?

Here’s the handsome male grouse before he starts strutting and puffing: 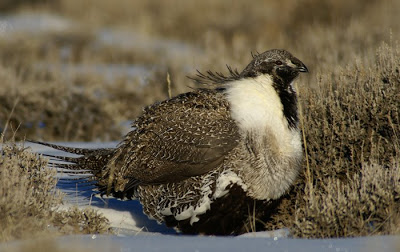 The air sacks are starting to inflate:

If you click on this next one for a closer view, you’ll see the grouse’s beak is open: 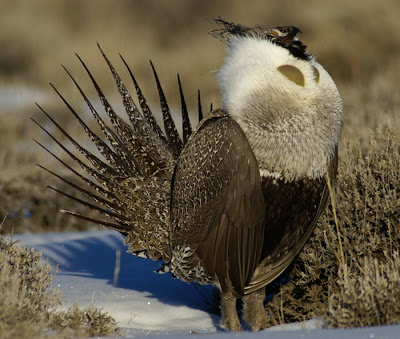 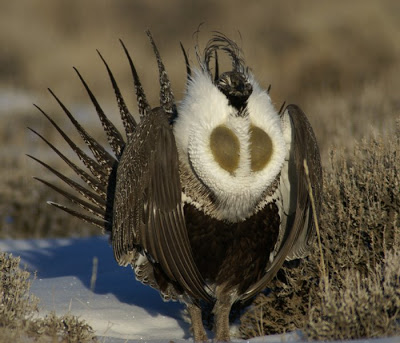 9 thoughts on “No hen could resist this”