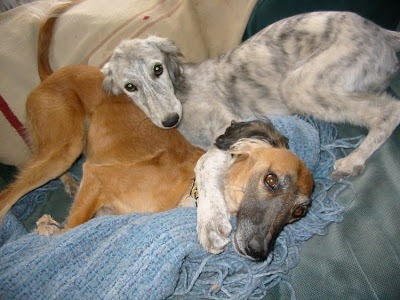 Yesterday we took the dogs out to the Indian ruin today for a run — all of them (except Lily, the ancient dachshund) together. They were so excited to be out. Before we even got down the hill to the arroyo we heard one of the dogs screaming in pain. We ran over and there was Irbis, lying down with an obviously broken leg…it was dangling from the rest of his leg, and he was bleeding where the bone had come through the skin. Best we can figure is that he stepped in an animal hole and it snapped like a stick. We carried him, screaming in pain, back to the car, rounded all the others up, and called our vet, who was not there, nor were the other Socorro vets (of course it’s the Sunday after Christmas). We went up to the emergency vet in Los Lunas, where they took two xRays, had us wait a long time, and told us that his leg was badly broken and might have to be amputated; they don’t do orthopedic procedures there, so we then (after they charged us $317 for doing practically nothing) went up to an Albuquerque clinic that is open all the time and where we know two of the vets through falconry. Ray looked at the xrays and told us that he thought he could pin or plate it together if there was no nerve damage; if the nerves are too damaged he thought it would be best to amputate it.

They presented us with an estimate of $2200 and said we would have to give them a deposit for $600 before they would even look at him further; and that the balance would be due when we pick him up on Tuesday. Luckily son Jackson and his wife Niki were with us, and they put the deposit on their emergency credit card. But we have to get the rest together. Libby’s 92 year old mother, who is in a nursing home, is going to see what she can do on such short notice — we don’t think her money is terribly liquid. 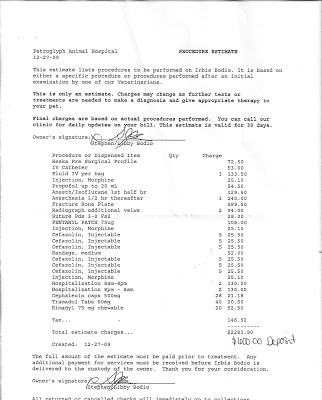 We’re feeling very depressed at the moment — we can hardly bear the thought of his losing a leg, especially as he’s just 11 months old. So we’re asking you, our friends, if you can help in any way, even with a small amount — they add up quickly. If you want to contribute, the best thing would be to call the vet’s office with a credit or debit card number — they expect to be paid IN FULL by Tuesday afternoon when we go to pick him up after his surgery. We need at least $1700(we have come up with loans of $800) to get him out, and need to repay Jackson and Niki, though they are infinitely patient. The phone number at Petroglyph Vet Clinic is 505-898-8874 — they’re a 24 hour operation. Ray Hudgell is the vet and the account number for Irbis is 4116.

I’ll be glad when this year is over! Meanwhile investigating pet insurance — this can’t happen again.

UPDATE: WE have reached our goal– thanks to all. Now we just pray there are no complications!

UPDATE 2: He is home after an exhausting day, & seems pretty good considering. He can walk to pee (though as yet hasn’t). There is no cast at all– just stitches. The plate is inside, and he has to wear an “Elizabethan” collar which he hates to keep him from biting them. But it makes it easy to observe the wound clearly.

The vets desk didn’t take down all the names who contributed so please if I miss anyone in the coming days let me know ( I will not rave on the stupidity of front desks— yet). We probably have enough credit to cover the next (3) visits.

We have amazing friends– I cannot say enough thanks, but will try.

35 thoughts on “Doggie Disaster and bleg”