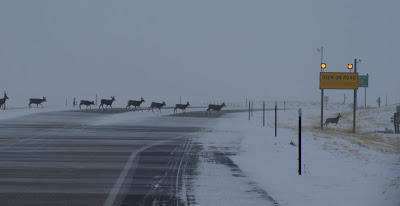 When a winter storm hit Tuesday morning, mule deer came pouring down the migration trail from the mountains, crossing what has become a very famous migration bottleneck, Trapper’s Point outside of Pinedale, Wyoming. Here’s a group of deer traversing the bottleneck between two rivers and crossing U.S. Highway 191. It is -32 degrees this morning at the ranch – not fit for man nor beast. I’m looking forward to Saturday’s predicted snowfall, so we’ll have highs of nearly 30 above zero. Sounds wonderful. Sixty degrees warmer than currently. 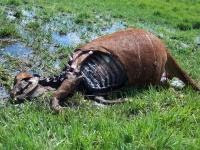 …have started ocurring again in Las Animas County, Colorado. This is apparently not the work of animal predators, as there are no tracks or footprints at the scene, there is no blood around the carcass, and the meat is removed with straight cuts as if with a knife. This has been in and out of the news there in southern Colorado and northern New Mexico with incidents reported back at least to the 1980s. This is the eighth such animal reported dead under these circumstances from the area this year and according to the article they are the first ocurrences since 2006.

I remember reading about these mutilations when we lived here in Colorado back in the 1980s, but really hadn’t paid much attention to it since leaving the area. Maybe Chas or Steve can fill us in on what may have transpired since.

There are a number of UFO cultists in the area who are firmly convinced that the perpetrators are extra-terrestrial. Heck, there’s a ballot initiative here in Denver that if approved this summer, would force the city to form a UFO investigation commission. If it passes, I suppose this would be something they could look into.

After looking at the map accompanying the story, it appears that some of the recent incidents have happened less than five miles from some property we own there near Weston. We’d been talking about building a cabin there, but now I wonder.

The last is a banquet in her honor, sheep, tea, vodka, and more. 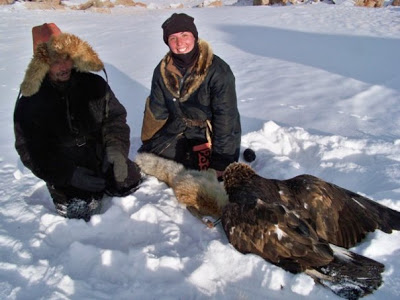 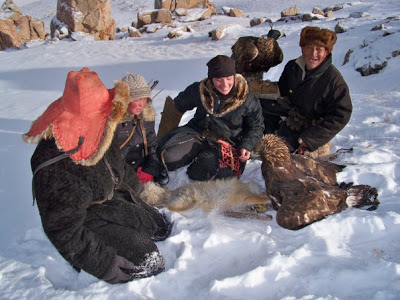 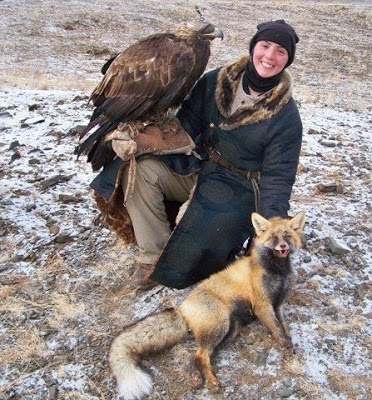 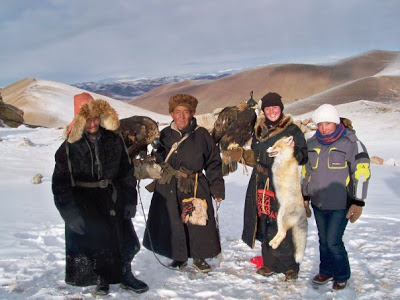 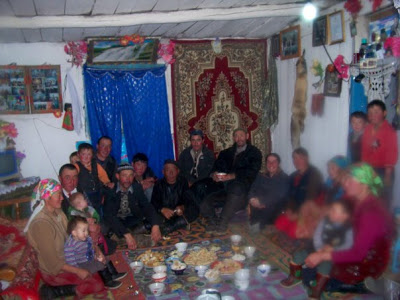 I’m amazed at how fast training progresses here! I’m about 150 km south of Olgii, outside a town called Daluun near the Chinese border. The falconers in this area only fly passage eagles, and luckily, its been a great year for fox. You won’t believe, but I’ve already seen eleven fox caught by eagles! When entering new eagles, they often use a make-eagle. The make-eagle system works well, I think. The slips are often so distant, the flights so big, that it helps focus a new eagle on that object scooting along the horizon, and what the game is, when another eagle is pumping hard after it. There hasn’t been any crabbing at all – the first one grabs the head and then the second takes the body. Interestingly, when my eagle was first flown with the make eagle, she would mirror the other eagles movments, pitching up high and coming crashing down. Now she’s flying on her own and is developing her own style. In general, the fox is killed, the eagle fed the tongue, and then traded for a hare leg.

Training was very simple – riding the horse was a form of manning in the beginning. The eagle was so focused on keeping its balance that it didn’t worry about other things, like bating. We called to the fist, then to the lure, then to the fist on horseback, and finally used a bagged fox that another eagle had caught to gauge her attitude toward foxes. She took it easily. The first week of hunting we used the make eagle – they took three foxes together, my eagle always coming in second but I think learning a great deal. The second week we flew her alone. She had some close calls right off the bat – knocking the stuffing out of a fox but failing to hold it.

Her first kill happened like this: The fox was running in a straight line maybe two hundred yards off. She left the glove (we had a bit of height, maybe 50ft off the ground, not much) and tried for a straight-grab. The fox dodged to the side at the last second but she didn’t hit the ground and was able get back her speed and try again. This repeated itself and then the fox ran around a gigantic stone that was on the ground. It was an oddly placed stone on the steppe, and was maybe thirty feet tall and fifteen feet wide. At this point my eagle pitched upward, looked down over her shoulder as the fox circled, and then dove and collided with it as it made it around the stone. It was particularly fun because this land was fairly flat, so it was easy for me to spur my horse to a gallop and race over there. I felt really intrepid! Usually its steep hillsides and I’m just plodding along downhill to try and reach the eagle.

The second kill was the opposite – we were on a precarious mountainside named “difficult stones”. The eagle jerked like it saw something so I released her (I prefer out of the hood, but you get many more flights if you don’t) – she flew quite far, pumping and serious, out of sight to another side of the mountain. We chased and found her halfway the mountainside down on a fox. It was incredibly steep though, and not real ground – all loose stones and sand. I was terrified! I had to get off my horse and walk it down – I fell constantly and was absolutely exhausted by the time I reached my eagle. She had killed the fox by then and so I quickly traded. I wish I’d seen the flight, though!

She’s been lucky and has only had minor bite marks (by a big fox she grabbed that broke loose) but my teacher’s eagle really got some nasty bites. It hasn’t affected her enthusiasm for killing foxes, but it looks very bad and I’m hoping they don’t get infected.

How’s New Mexico this time of year? I really miss you guys and, certainly at times, the comforts of home. It can be quite tough out here, sometimes depressing, but I do love it and feel like I’m learning worlds.
PS – Canat talked with Mongolian officials, and I can export my eagle if I’d like!! Well, at least the paperwork is possible on this end.