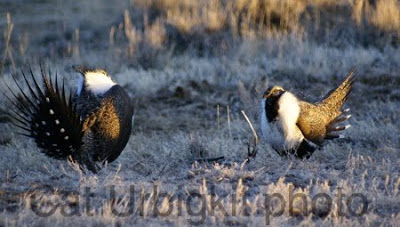 It’s official: spring has arrived in western Wyoming, as evidenced by the number of Greater Sage-Grouse on the lek I visited this morning. Leks are traditional strutting/breeding grounds for this biggest of our native grouse species. I usually set April 1 as my target date to visit leks, but with warm temperatures and most snow already gone from our sagebrush steppe, spring is early this year, and so are the grouse.

The photos I’m posting today are all of adult male grouse, which weigh up to about 8 pounds. (Sorry about the watermarks on the photos, but I’ve been finding my photos posted in various places without attribution or permission.)

The U.S. Fish and Wildlife Service recently decided to list sage grouse as a candidate for Endangered Species Protection (the “warranted but precluded” ruling). Sage grouse in western Wyoming are still abundant. State officials estimate Wyoming’s sage grouse population at 207,560, far more than any other state. Idaho’s population is estimated at 98,700. Although sage grouse populations in other areas have suffered declines, grouse are still game birds available for harvest here. 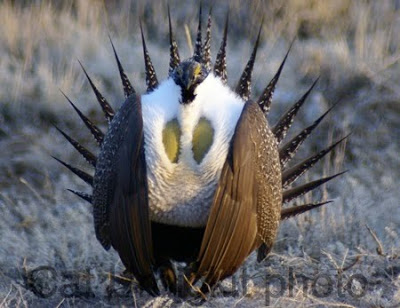