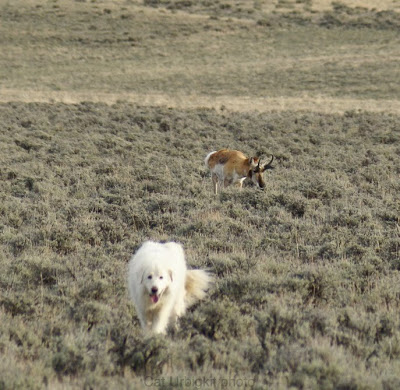 Lambing is in full swing now, but here’s a short review, in pictures, of the week.
This pronghorn buck is our constant companion. We don’t know why, but he hangs out with the herd, and follows Rena and I around a lot.

The guardian dogs do not stay together, but greet each other a few times a day when they meet up. Here Rena approaches her mother, Luv’s Girl, below the Coyote Rocks. 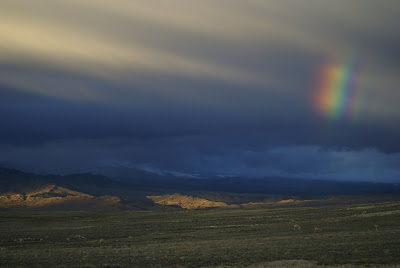 Here’s a ewe and lamb on Coyote Rocks just prior to sunset. 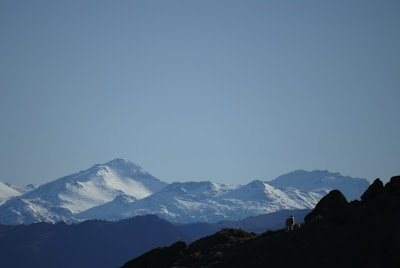 Rant has my unwavering praise this week. A lamb ended up getting stuck in a crack between the rocks on Coyote Rocks. Rant stayed with it all night, and wouldn’t move until I came and found the problem the next morning. He was so high up in the rocks I couldn’t see him, but could only hear him whining. When I took the lamb, Rant collapsed flat on his side, snoring away from exhaustion. Good, good guardian. I’m actually going to write up this story for a paper it was so wonderful. 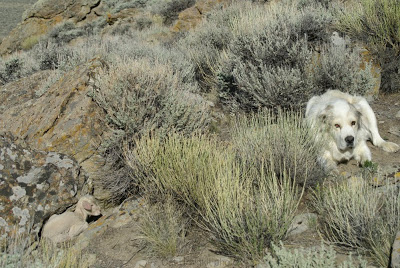 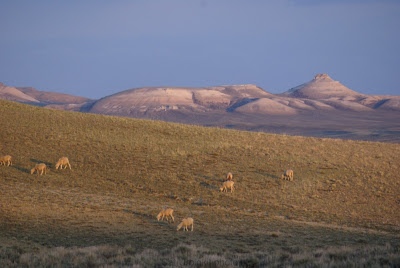 The guardian dogs never look directly at the ewe they are guarding while she is giving birth and getting her lamb up for the first time. Rant’s non-threatening posture is effective, and once the ewe moves off a little from the birthing place, he’ll clean up the afterbirth, reducing attractants for predators. All our guardian dogs do this, and it seems to be an important factor in reducing depredation on lambing grounds. 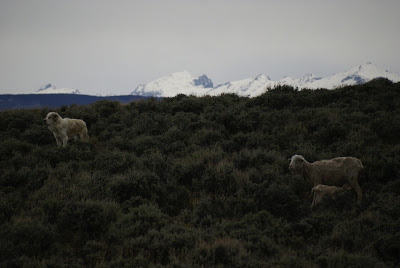 We’ve had several blizzards, and the result is that I have a small pen of orphan lambs. All the dogs stop in to see them during the day, as Luv’s Girl is doing here. The lambs love to follow the big dogs around in the sagebrush when I let them out for walks and exploring. 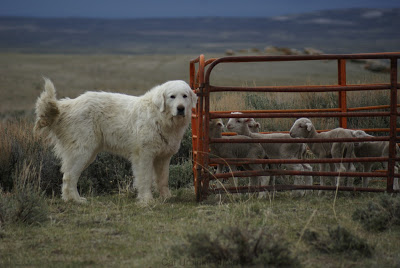 As for wild critters, the dogs have apparently displaced the local coyotes because they complain around us, but no fresh sign; a burrowing owl moved into a hole in the road to my camp and doesn’t like me trying to photograph it; and I was surprised to find a sage grouse lek still active this week, with both hens and cocks still attending.

Word count on the new manuscript: 30,000.
Number of vehicles I’ve seen in the distance in three weeks: 4.
Number of times I was alarmed at the idea of having to be social: 4.
Back to camp now – I’ll check in again in another week.

UPDATE: Hey everybody, thanks for the great name suggestions for the un-named rock, but Smartdogs wins with Blog Rock. The name stuck as soon as I read it.