For those keeping score at home, I’m now two for two at perpetuating bogus memes on this blog.  My next post, should there be one, will contain only factual content (Boring, yes, but safer.)
–Matt Mullenix

A Facebook friend forwarded the above video footage.  Perhaps you’ve see it, but it was new to me.

The bird is identified as a Golden eagle and the location as Canada.  The video was posted, at least in this instance, yesterday by a YouTube subscriber named MrNuclearCat.  No idea who, when or where, this scene actually represents, but I’d love to know more about it.

Quick observations: It strikes me as a natural sequence, although obviously remarkable and curiously well timed camera work.  If it’s a wild eagle, it is one that has evidently hunted parks before, perhaps for stray pets; the flyover and quick turn into a dive, and the general disregard for bystanders makes it seem like habituated behavior.

Is it a Golden?  It would have to be that or a Bald in Canada, although I guess a Stellars is possible.  And of course, if this is artificial, it could be anything from anywhere.  I have to say that the color patches and wing shape seem odd to me, but a Golden would be my best guess too.

Of course, my powers of observation have failed me before.  🙂

Thoughts, anyone?  BTW: the child seems to have been unhurt. 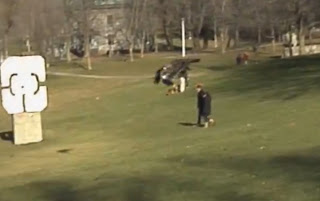 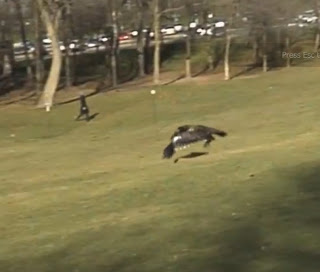 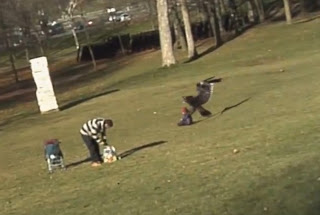 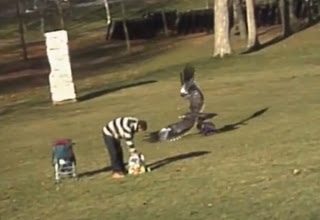 6 thoughts on “Eagle Snatches Child in the Park: Thoughts?”