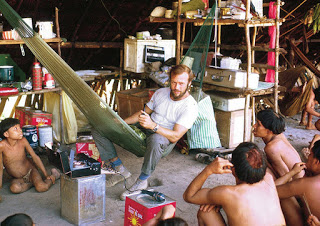 Chagnon was famous for his 1960s field work with the Yanomamo, and his book on them was required reading in a number of classes I took both as an undergraduate and in graduate school. Over the years his description of the Yanomamo as an inherently violent people fell out of favor as flawed and too judgmental, but his biggest sin in the eyes of many cultural anthropologists was his opinion that some aspects of human behavior are based on genetic information passed from parents to children. To many anthropologists, that smacked of the Eugenics movement of the late 19th and early 20th century that used Darwinian ideas to justify racist efforts to “improve” the gene pool. Lamentably, his critics quickly defaulted to calling him a racist and a Nazi in the late 1970s, and the battle has been on ever since.

The attacks culminated in a non-scholarly book published in 2000 that accused him of fabricating field work results and of intentionally conspiring to cause a measles epidemic among the Yanomamo. An objective view of these charges would indicate most of them are specious. Chagnon hasn’t helped himself by alienating some people with his large ego and prickly personality, but the attacks on him have gone far beyond anything reasonable. Advanced genetic research over the last 10-15 years shows he wasn’t far off on some of his opinions. Chagnon feels vindicated by his election to the National Academy of Sciences last year.

From Chagnon – “The last bastions of resistance to evolutionary theory are organized religion and cultural anthropology.” Speaks for itself.

From one of Chagnon’s critics, Leslie Sponsel – “The charges have not all been disproven by any means.” Love the attitude – guilty until proven innocent.