I have been in touch recently with Pete Humphreys, son of the man who brought Roaring Emma, the sporting writer James Wentworth Day’s 140- year old magnum 8 bore Joseph Lang, back to England. Pete is an all- round sportsman himself and heir to a rich heritage, especially in wildfowling, and a font of what may seem to be arcane lore to an American.

Americans, when they think of England, usually picture “driven” shoots and reared pheasants, using guns that cost as much as my house; more a rarefied and difficult mixture of farming and a shooting game than a communion with the wild. English coastal wildfowling, with its big guns and more egalitarian nature, is less familiar. In England, punt guns were for adventurers and romantics, not poachers or market hunters*; the possibility of a big shot was balanced by the difficulty of stalking birds on open water and the danger of going out on winter seas in a kayak- like craft, armed with a cannon that might weigh over 100 pounds. Some seasons you might get only one or two good shots; in Colin Willock’s book The Gun-Punt Adventure, published in 1958 and covered in my new book on sporting books, his first season’s best shot was all of seven birds!

My old friend John “Johnny UK” Hill says it well: “… long may a few, specialist, intrepid ‘fowlers ply the wild estuaries around the UK!… I have seen them depart from [wildfowler, conservationist, and artist] Peter Scott’s lighthouse at Sutton Bridge, and later return, counting them back like old time aircraft, as if the weather changes, it can be a very dangerous activity. Local knowledge of tides, sandbanks and weather is crucial, [though] mobile phones and improved rescue services have mediated the modern day risk a little!” In a crowded island, the edge of the sea is still the edge of wilderness, danger, and adventure.

If you simply look at a punt gun you can see it is big, but how big? The one illustrated in the post below– here is a shot from the gunner’s perspective– is one of three DOUBLE punt guns made by Holland and Holland, this one in 1900; it weighs 250 pounds and shoots twenty ounces of shot from each barrel. 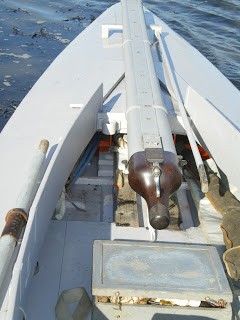 Its owner also has a single- barreled Patstone with a 1 3/4  bore that shoots 32 ounces of BB’s with 5 of black powder! (They got one shot last year). The Holland is, like all of its maker’s products, something special, and has what may be a unique feature; according to Pete “The locks are set up so the 2 shots go off with a tiny delay… when the first barrel goes off, the gun lifts and the birds jump.  The second barrel goes a split second later to shoot through the flock as it lifts.” Or at least this is the theory; I suspect getting such a shot is still a product ot determination, skill, and luck.

Below, some illos from the ninth Edition of Greener’s The Gun (1910), showing various punt gun actions. The last is a single H & H; put two side by side and you have an approximation of the one in the photos. 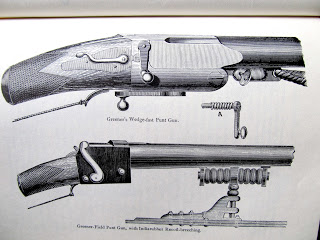 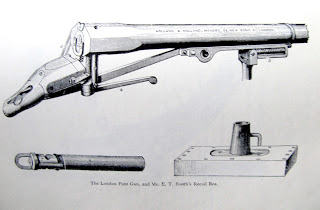 * Probably the greatest slaughter for commerce was accomplished with 12 bore repeaters rather than big guns. Browning patent autoloaders were favorites, though market hunters favored (prohibited) extended magazines. The number of birds rather than the nature of the tool was still the only factor that affected conservation, though I suppose banning a tool was not as stupid as, say, banning Italian immigrants ( a solution advocated along with banning Browning A5’s by the irascible William Hornaday).