Recently, writer Tom Davis put me in touch with master fly- tier Pete Fleischman, thinking correctly that I might have the skin of our local specialty, the Mearn’s quail.Its spotted fethers were neeeded for the”modern” classic salmon fly called the Dali, after the artist of course.

Traditional Atlantic salmon flies are strange things, surreal colorful attractors (or annoyers?) to tempt a quarry that does not eat in the rivers where it spawns. They are huge, complex, Victorian or  Edwardian, made of almost ridiculous numbers of species, and I have always wanted one. Now I have a fabulous original. Pete writes of its composition:

“The fly is called “The Dali”, designed by Mark Waslick, a photographer, fly tier, etc. from Vermont. The pattern uses the Mearns Quail feathers that you so graciously sent to me. There are four sections to this pattern each are veiled at the top, bottom and both sides with jungle cock. In the second section from the rear you will see first a pair of black spotted wing covert feathers, back to back, and white spotted breast feathers. At the fourth section behind the head there are two more black spotted covert feathers, back to back. The wings are made of individual strips of colored turkey tail feathers with Amherst pheasant tail. The blue cheek feathers at the base of each wing section are Blue chatterer substitute, Asian jay. The keel feathers on the bottom of the fly are peacock crest feathers. The gold tail feather and topping feathers are from the head of the Golden pheasant.”

Courtesy of John Burchard, who bred them, and Daniela Imre, a co-
“grandparent” of the human species: the wonderful rainbow litter of
Tigger, bred here, and Prince. Multicolor, smooth and feathered, Kazakh
& Arab; all progenitors hunters: the ultimate Silk Road US
litter!

I am tempted by the little brindle girl and the
feathered tri(s?), but health, poverty, and the desire to have a pup
with Taika’s genes say no.. as I say, tempted.

There will be more photos.

My old friend David Zincavage has a blog featuring his patented brand of ferocity and political opinion (see “Never Yet Melted” in blogroll) but when writing on his own canine companions to his friends he is at his funniest. Here he is on Uhlan, who, it will not surprise you to know, is Ataika’s nephew:

“Until we met Uhlan, Karen and I had been unaware that Kazakhstan resembled California, having no rain and a perfect year-around 70 degree temperature, and that tazy dogs were waited on hand and foot by obedient human beings who answered to their every whim.  I have yet to figure out exactly what delicacies are prepared daily in Kazakhstan, but our tazy is extremely fussy and conservative about food normally.  He won’t eat organ meats from chickens or turkeys. He looks unfavorably on unfamiliar dog treats and lump-style canned dog food.  His daily Alpo has to be varied regularly, or he’s perfectly capable of turning up his black nose and skipping dinner altogether.  His preferred flavors of dog food change frequently.  But he will eat dead groundhog (fur and all)  happily day after day! Someday, we have to visit Kazakhstan to see all the tazy sultans living in their palaces with all the human servants.”

Further: “What does not seem generally recognized are the dramatic and oratorical abilities of the tazy.  Uhlan has a piteous “ook, ook, ook!” sound used to make you drop whatever you are doing and come and let him in immediately.  When he doesn’t get his way (you don’t hop to it, and let him out, or you fail to give him his third milk bone of the morning), he delivers long speeches in tazy, obviously loaded with curses and abuse, accompanied by amazingly threatening facial expressions, lips curled, teeth bared.  If the human still resists, Uhlan will proceed to perform his own personal version of the death scene from Hamlet, accompanied by a soliloquy delivered in increasingly rising volume making it only too clear how terrible the suffering that poor doggie is enduring really is.  He can be made to stop only by the most vivid and direct threats.”

Uhlan with remains of Marmota monax:

Water: none for six days and counting…

I will continue to note this until the jackasses (with the help of some good people) get it fixed.

Going to Albuquerque for the second time in three days, trying to get Passenger pigeons up and flying, and generally overcommitted. But the water news has been ludicrously inadequate. We should never have lost water, and should have it back in a week; the situation only has a tenuous connection with drought.

Everything I see on the news is off.  The marshall  is being diplomatic but it is ludicrous to blame the guy who has been trying to warn everybody for years, or to equate him with the mayor he has been opposing that long. The mayor and some other officials made real life mistakes and bad decisions, turning down plans to put in backup pumps and dig, losing and misfiling documents and not getting in applications on time. The guy who says they are all to blame is running against the mayor but why he is equating the  mayor and the marshall is beyond me. In fact the real drought barely has anything to do with the situation– we should have faced it with a new pump & well, a backup, and three full auxiliary tanks.

Also we are NOT “absolutely without water”, and NOT restricted to two bottles a day. Every private well including one or two in town is delivering normal amounts, as are all on ranches. I have lived through two other water- restricted droughts here as has anyone who has been here any length of time. We don’t have more “seniors” than any normal town, and they tend to be more tough and philosophical than newcomers. The whole thing makes me realize just how incompetent today’s reporters are. Virtually everyone in town knows all of the above!

Magdalena has gone national and may be on your evening news, but for an infuriating reason: our little town has just lost all its water in a well collapse, and though ranches with their own wells are all right, there is no water available for our village– around a thousand residents– and therefore none in a  60 mile stretch of Route 60 between Socorro and Datil. Of course ranchers still have wells (though the drought has lowered levels in many) but driving 12 miles on rough roads to take a shower is not an attractive option.

Our crisis may symbolize the emerging conditions in the New West. Everybody concerned kicked the problem down the road. The state dragged its collective feet on the necessary permits, then piled on rather than helping. State inspectors actually came in and tried to shut down all our businesses and the gas stations because they had no potable water. Bar owner Darrell Pettis and Bob Winston of Winston’s garage resisted, and so far everything is open. Darrell and filmmaker Matt Middleton got a few minutes on Albuquerque TV explaining the difficulty of life here and the political indifference of the state to the fate of tiny old remote towns. Do the idiots sent to inspect us and shut down our only social links and sources for food and drink realize what stress that would add to an already angry populace?

This is just a rushed beginning for what will doubtless be continuing coverage of the crisis. Estimates of the time needed to fix the well range from a couple of days to a MONTH. And yes, there are important connections to our ongoing water hijacking crisis– hit the search box with the words”water” or Plains of San Augustin, or go to the site for the Golden Spur for more news…

UPDATE: For now at least, a video from KOB TV here, featuring Marshall Larry Cearley, filmmaker and water activist Matt Middleton, and Spur owner Darrell Pettis, all of whom have been working on the problem. 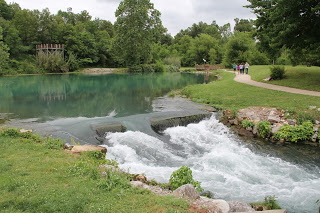 Last Sunday, Connie, my father and I drove from Jonesboro up into the Arkansas Ozarks to Mammoth Spring State Park. Mammoth Spring is located a hundred yards or so south of the Arkansas/Missouri line and is aptly named, with a flow of 9 million gallons an hour. It is the source of Spring River that flows south deeper into Arkansas. The bone-chilling water provides a great trout fishery. I’ve been fishing up there with my family since I was about four years old.

We were lucky enough to see a fairly large flock of wood ducks paddling around in the spring, a species I don’t see much in Colorado.  I got a picture of what Connie referred to as a “flotilla of drakes.”

Also quite a few mothers and ducklings.

Several hundred yards downstream from the spring, a dam of cut local stone was built in the 1880s. It was originally used to power mills, but hydroelectric generators were installed here in the 1920s. It was used for hydroelectric power into the 1990s.

Carol (1958 – 2013) my younger sister and only sibling, died in Jonesboro, Arkansas last week after a mercifully brief struggle with lung cancer. I’ve posted her school picture from First Grade, as it shows her as the funny and vivacious girl that I always like to remember.

If I am slow for the next couple of days please forgive me, as it is becoming uncomfortable to sit in this chair and it has been hard to type for a long time. I’m spending the next few days learning to use the iPad and training the dictation software.

Wish me luck. I think it may be much easier to produce material with that technology than with the current one, especially if I can do it almost anywhere.