Tim Gallagher, whose new book Imperial Dreams I have reviewed below, is visiting England and just sent this fine portrait of two generations of falconers. John Loft, on the right, is the living master of merlins,; he literally wrote the book on them, A Merlin for Me, a delightful but almost daunting combination of experience, natural and sporting history, and even poetry; he also mentioned me in his rhyming dedication. He is a teacher, a writer, a poet, and a scholar, not to mention a mentor and a friend.

John continues to translate early falconry classics. His work on a never- translated manual by D’Arcussia, a 17th century Provencal professional, makes the most interesting falconry book between Frederic II and the late 19th century The Art and Practice of Hawking, accessible. It enables English speakers, whose idea of falconry can be a bit narrow, to see a western falconry culture with much eastern influence, one that Emperor Frederic would have recognized, with more similarity to what we do in here in New Mexico than to Anglo- Saxon game hawking.

I remember how he took us to see the cathedral and meditate on its history and architecture; now Tim has also had the privilege. Have a whisky for us at your pub, John, and hope we can make it back! 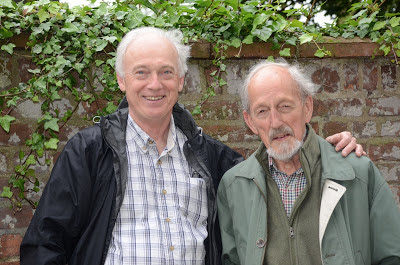