Terence Clark has been in Morocco for the Festival of Traditional Hunting, where he photographed some hawks. Most were Peregrines of the migrant race that they call Shahin Bari, “Bari” meaning “of the sea”– probably the far- northern Falco peregrinus calidus, which may have flown from as far as Siberia.

But the young man on the right in the second pic has what Paul Domski rightly calls “an immature, a somewhat odd Accipiter”. At a quick drive by it looks like a Gos, but its skinny bottle shoulders and longish head and legs and even neck don’t look quite right even for a small male– and in relation to the Peregrine, it doesn’t look that small, nor are calidus small Peregrines. I thought to check the not- quite – Accipiters Melierax, the “Chanting goshawks”, one species of which does live in Morocco, but all add barred rather than pale bellies,

Surely this is something Q’s readership can solve. I know, it is probably just a Gos sitting funny. But Paul and I have seen and flown a lot of Gosses– he has at least two these days.

Right or double click to enlarge for detail– these are big. 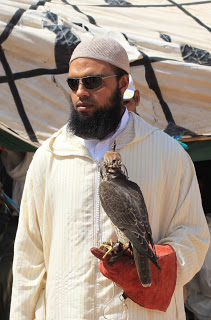 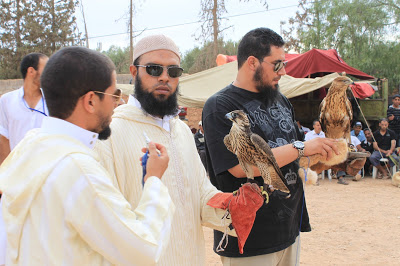