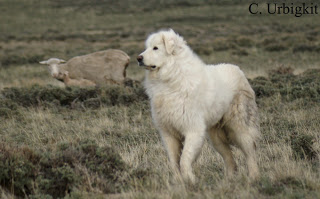 This summer, our sheep have been grazing a series of private pastures in the foothills of the southern Wind River Mountains – pastures that have been used by domestic sheep herds for more than 100 years. This small herd is protected by the three burros that are always present, and by livestock guardian dogs. The range here is fluid and complex, with thousands of sheep and their guardian dogs coming and going, as well as the shepherds that accompany them. The sheep herds carry the same genetics, and I’ve raised many of the dogs that use this rangeland that covers many square miles, some of which is divided into pastures, while others are allotments that include public land.

Last weekend, there were about 1,000 sheep grazing in about a two-mile area, with at least six livestock guardian dogs. The sheep may spread out to graze during the day, but bunch up together to bed at night. Where each dog was located with what bunch of sheep at any given time is fluid. We’ve had a lot of bear activity, and the dogs have done a fantastic job of keeping the bears out of the sheep in this area.

One night last month, when a bear got into a nearby cattle herd, two of the dogs from my bunch raced to the rescue, as did another guardian dog that came from the south. The two dogs returned to my bunch within about 45 minutes, and the other dog returned to the south. Rena (a five-year old Akbash female) had stayed with my sheep – the only reason I know this much is because I was sleeping on the ground next to the herd that night. I had believed that if we had problems in the sheep, it would probably be with wolves. When both black bear tracks and grizzly bear tracks were found the next morning, I gave up sleeping under the stars, and started using a tent as a more visible sign of human presence. The only wolf tracks that were found were old, but it quickly became evident that bears were a constant presence. Two particularly enthusiastic dogs (Luv’s Girl and Tigger) are excellent at hazing bears away.

Back to last weekend: Saturday morning, there was a combination of Akbash and Central Asian Ovcharka dogs guarding the herds, which were divided into two pastures, with the sheep bedded close to each other, but with a fence line between two main bunches. Some of the dogs were back and forth on patrol, and others stayed inside the flocks. I don’t know what happened Saturday night, since I wasn’t there and the herder camped on the hill to the south couldn’t see anything in the dark. They next day, we found dead sheep, and walking wounded sheep that had to later be put down. One dog was missing, but later returned. The big herd in the adjacent pasture had been moved into the next allotment (still abutting my bunch), and we made plans to move Monday morning since there wasn’t enough time on Sunday to do all that needed to be done. We checked all the sheep and hiked around both inside and outside the pasture, trying to find all the dead sheep, looking for tracks, and covering up some of the carcasses lest they be destroyed by ravens or other scavengers. In total, there were nine dead sheep (two 90-pound lambs and 7 adult ewes weighing about 175-200 pounds each). I notified federal wildlife officials that we had a problem and needed an on-the-ground assessment. That would happen at first light on Monday.

Jim had to work on Monday, so we raced back to the house to drop him off, and I threw my gear in the truck and went back to the herd. Hud the herding dog helped me bunch the sheep and drop them in a corner of the pasture where I would hold them all night. I stayed outside with Hud, sitting on the ground nearby in a soft drizzling rain, until after dark. I parked my truck about 100 yards from the herd, and slept in the cab with Hud, with the window down so I could hear and check the herd through the night. The last I saw that night with my spotlight was Rena patrolling from the truck toward the far end of the pasture where the kills had happened the night before. I knew the burros were on that end as well, but couldn’t see that far with my spotlight. I could see Luv’s Girl (Rena’s nine-year old mother) sleeping with the herd in front of me. It was very dark, with the drizzle from the rain and the clouds completely hiding the crescent moon that was finally visible a few hours before sunrise. There were a few ruckuses during the night, and I could hear guardian dogs barking in various directions at infrequent intervals. Only once during the night did I see the sheep stand up from their beds, but Luv’s Girl was still visible in front of them. They settled down and I went back to sleep. About 4 a.m., I kicked Hud out of the cab of the truck, and found Rena sleeping on her side next to the truck, with fresh blood on her tail. I talked to her and she responded, but quickly went back to sleep. I spotlighted the sleeping herd, with Luv’s Girl still present, and waited for daylight.

When darkness started easing, I could hear the neighboring sheep herd as the animals started rising from the hillside to the south and I saw two Ovcharka guardians between that herd and my bunch, as well as Luv’s Girl still bedded with my herd, and Rena next to the truck. When I saw a pickup truck driving in, I went to meet it, and within minutes, a federal animal damage control airplane flew in, breaking through the morning fog, shooting two wolves as they fled to the east. From her wounds, we know that Rena had tangled with a wolf or wolves during the night, but the wolves never made it to our herd because of her efforts. I don’t know how many other dogs or wolves were involved, since I didn’t see the confrontation. We also don’t know what role, if any, the burros played.

When Rena tried to stand and walk, she labored to work her hind end. I found two major bite marks – one near her spine and the other on her tail, both deep punctures through her long hair and undercoat. I never tried to assess further damage, but backed the truck up to the ditch so she could load up, with me helping to lift her back end, her crying when I lifted her. She collapsed in the bed of the truck, into an exhausted, wounded sleep.

There was a flurry of activity from that point, much of it involving other people coming to the rescue while I turned my attention to Rena and getting her to the vet clinic an hour away – my herd was moved to the south, and the carcasses picked up while I was driving to Pinedale. There would be at least two other large range herds exiting the mountains in the next few days (each herd with up to 11 guardian dogs), and they had been slated to rest and transition in these private pastures for a few days before they would begin trailing to the south. The plans were changed to speed the herds through this area. I learned that another guard dog was brought off the mountain with his throat slashed by a predator. He’s not expected to live.

By the time we got to town, Rena was unable to get up on her own. I climbed into the back of the truck and lifted her onto the gurney, with the help of two other women. Rena was very sweet about it all, as she was strapped down and rolled inside the vet clinic. The clinic staff let me stick around for a few minutes to comfort Rena, as they checked her vitals and began preparing a plan of action. First would be fluids and sedation before they would shave her to find the damage underneath.

When I returned to see Rena in the late afternoon, she was still groggy from sedation, but her numerous wounds had been cleaned and stapled. She wagged her tail at me, which gave me hope that she’ll pull through. The vet clinic staff said that the tags on her hind end had probably saved her life. Much hair had been pulled out, but cushioned the bites. On Tuesday afternoon, the clinic released Rena to come home, where I could help keep her wounds open and draining, and feed her painkillers and antibiotics. She’s not out of danger, since the greatest threat is infection.

As I’ve said before, when large carnivores and livestock share the same range, some animals will be killed – some wild, some domestic. It happens across western rangelands routinely. It is not pleasant, but it is reality. There’s no compensation for our recent losses, or our vet bill, and our priority is always to stop the depredations. You won’t hear our family calling for eradication of any species, but you will hear us advocate that dangerous predators be killed when there are conflicts, and we do support sport hunting as a wildlife management tool. We share the range with many other species. We share.

This is really only a story because rather than it being some ranch that you don’t know, you do know our family, and some of the animals involved. Rena is famous because she was the runt of a litter of Akbash pups that was featured in my children’s book, The Guardian Team: On the Job with Rena and Roo, and in my adult book, Shepherds of Coyote Rocks: Public Lands, Private Herds and the Natural World. Thousands of Wyoming children have met her through school and library programs. Many of you have seen pictures of our sheep, burros and dogs through my Facebook posts over the last few years.

Some readers will want a more satisfying conclusion to this story – something that tidies up all the loose ends – but I can’t give it to you. This is not an automated system, with predicted events and outcomes. There is no magical number or breed of dogs, or combinations of breed, age or sex, or set acreage, or fence design, or terrain, that allows a livestock producer to follow a formula to safeguard their herds from predation. I can’t tell you how many black bears, grizzly bears, and wolves are in the area, let alone how many of these animals the guardian dogs come into contact with. This is a fluid system, with livestock, predators and guardians sharing rangeland at random times and spaces, sometimes in conflict, but with varied outcomes. It’s never perfect, but it works really well most of the time.

What I do ask is for more compassion for fellow humans. The blame for the recent sheep deaths, dead wolves, and Rena’s injuries is directly on me, since it is my responsibility as a shepherd to protect my flock. But don’t expect me to take any crap from someone not working alongside me to minimize conflicts on the ground. Further polarization of those passionate about ridding the rangelands of something (either wolves or domestic livestock) does no one any good.

I am thankful for those who offer understanding to others involved in difficult situations, well wishes for the critters we share this earth with, and hope that peaceful days outnumber all others. 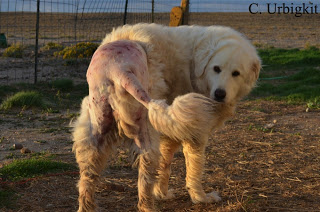 26 thoughts on “Of Livestock, Predators, & Guardians”