I have accumulated a few…

Federico sent these wonderful reconstructions of Pleistocene “Hominins”, saying “These are by far the most compelling reconstructions of ‘ancient’ people I have ever seen — admittedly one of the two is just an old school Homo sapiens…  For whatever reason I do find both reconstructions so much more alive and true to life than anything I have ever seen:  I can see that the old sapiens would have lots of stuff to teach *me*, and I can see that the neanderthal is just so close to us — I can feel how disappointing it would be if we could not communicate with someone like him.”

Keith Brady sent down this wonderful video on Chernobyl from Canada. I would have eaten the old lady’s vegetables– would you? As Keith said, “She’s a peach – got a lot of blood in her body….unlike the BBC guy.” If this were a YouTube I would have embedded it. Read Mary Mycio’s Wormwood Forest– in Amazon but the link won’t work– for more background.

Annie Davidson sent this pic– no link– via the San Diego Natural History Museum, of a horde of 33 round tailed horned lizard skulls found while cleaning out an America Kestrel nest box in the Chiricahua Mountains of southern Arizona. As we have both species, I must check out some nests; I would love to find a similar one. It looks like an Asian Buddhist skull rosary, and you could make a variant.. 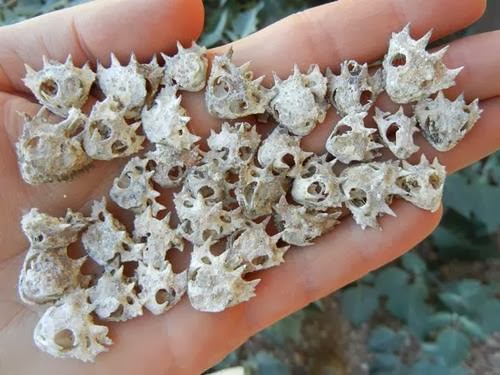 From Chas: vulture- safe zones in India. It may be the first positive sign for these necessary scavengers since I wrote up the problem in the Atlantic too many years ago. Wonder what the Parsees are doing…

Younger people don’t know, and older ones forget, that it was not only (or even) liberal Democrats who  saved  our wilderness areas in the last twenty or thirty years. The always contrary (and always interesting) Dave Foreman reminds us, here of what the PC would think of as some unlikely wilderness advocates. Remember (judge, senator) Jim Buckley? Libby’s late parents were of that ilk too.

9 thoughts on “Links plus”