Pluvi Tweets about this fantastic photo of Cassowaries, and once again damns the lizards of Jurassic Park. Early adapters  can risk looking weird, but those who cling to the old paradigm too long can come to look like Flat – Earthers… 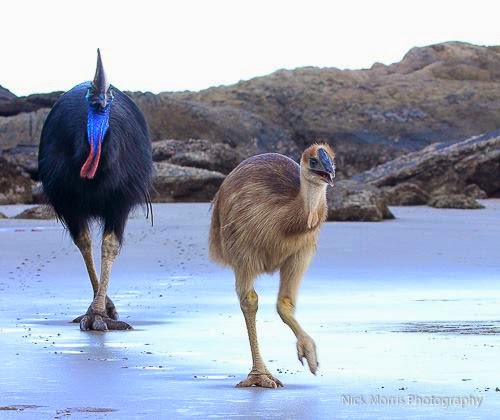 From Lucas Machias comes a link to this paper on Tyrannosaurid combat and cannibalism in Science Daily, with a nice illo by Luis Rey  of two big mean birds. It is not even remarked on… 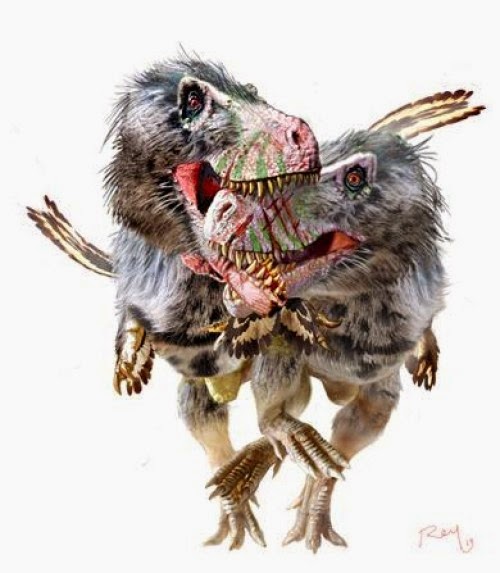 On our rockstar Helen, by Jonathan Katz, an uncommon observation.

“… the writer Wilfred Sheed wrote once in the New Yorker that “every time a friend succeeds, I die a little.” Sheed wasn’t being nasty, he was being honest. I loved Macdonald’s talk and a I loved her book, but I died a little tonight.

“Even though I died a bit, looking at the crowd, reading those reviews, I also loved every second of it. Sheed is right,  I suppose, every writer winces a bit at a book as good as this one, but I loved being there much more than I didn’t. When a book and a writer  deserves every bit of the praise, it softens the blow.”

Also, as truthful if less painful:

“Macdonald talked about the need for animals in our lives, and  her worry that they are disappearing from the every day lives of people.”

Helen’s latest conquest is an excellent review by Caleb Crain in the New York Review of Books (no free link yet). 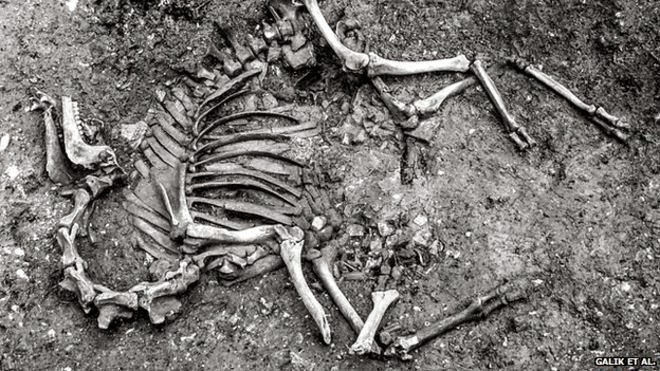 Archaeologists in Austria have excavated the intact skeleton of a camel in a suburb of Vienna. It appears this camel was used by the Ottoman Army in the failed siege of Vienna in 1683.

Detailed analysis of the remains showed that it had worn a harness and had been ridden. Additionally, it proved to be a Bactrian – Dromedary cross, a hybrid that was very popular for use by the Ottoman military. I wondered what a two-hump x one-hump camel cross would look like, and Chas
was able to give us a picture of one. 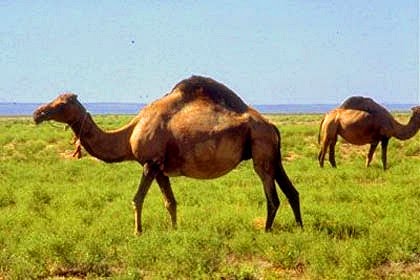 So there you are. Looks kind of like a Dromedary on steroids to me. 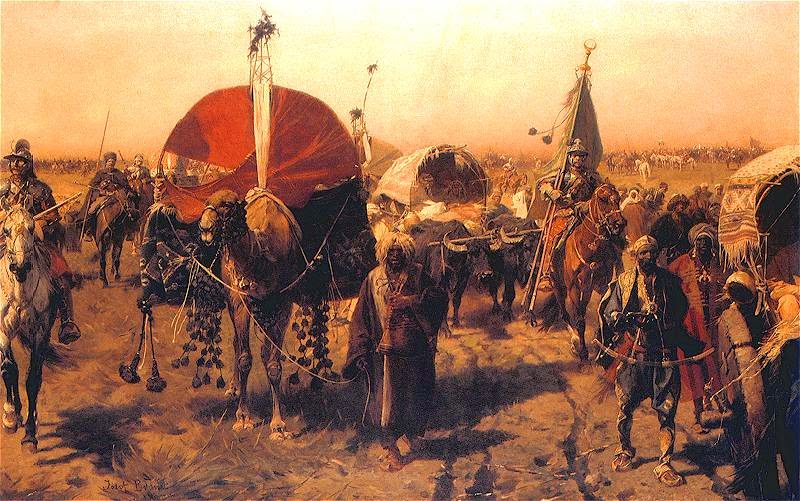 Oh, and while I was looking at the Wikipedia page about the siege of Vienna, I found this painting of Polish soldiers headed home after the battle with loot taken from the Ottomans. Including you know what. Maybe there are some more skeletons waiting to be found in Poland.

Remember about three weeks ago when I posted about Neanderthal jewelry and said the more we find out about them, the more like us they seem?

Maybe I was a little hasty.

For the first time, researchers in France have been able to isolate and identify the bones from the inner ear of a Neanderthal. It appears that there are significant anatomical differences between these bones and those of modern humans. The upshot may be that there may have been differences in the range of hearing between modern humans and Neanderthals. The research hasn’t progressed to the point where any of these possible differences can be identified yet.

And my recurring comments on the value of re-studying old collections – this skeletal material was originally excavated in the early 1970s.

An article in the New York Times tells us that coloring books for adults is now “a thing” as we say these days. One popular adult coloring book has sold 1.4 million copies since 2013. The article tells us that many of these crayon enthusiasts buy multiple copies of the same coloring book so they can try different color patterns on the same picture. Some people are turning this into a social activity as they meet in “coloring circles.” That might be fun if they served beer.

My daughter always seems to have an instinct about these things. A couple of weeks ago, granddaughter Bella was laid up with a cold, and she and Lauren spent some quality convalescent time together coloring in one of Bella’s coloring books. 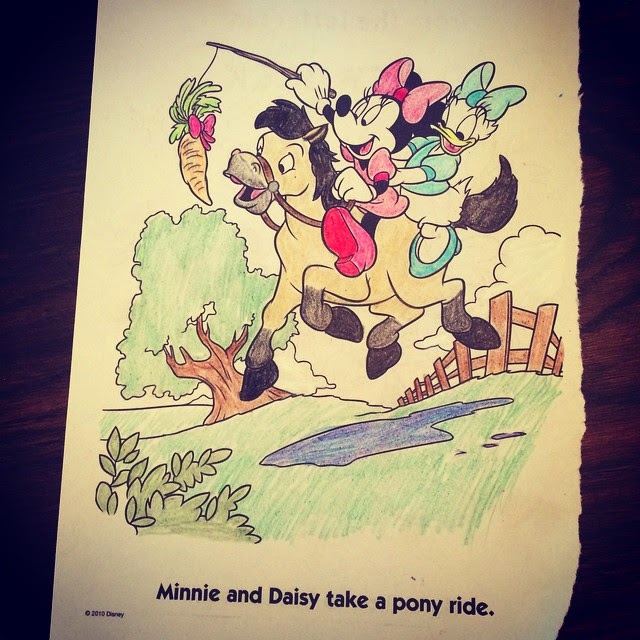 Lauren proudly posted some of her work on social media. With an appropriate equestrian theme. 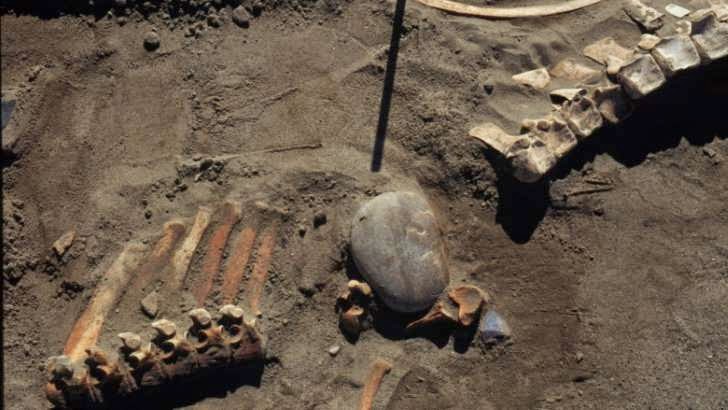 A number of years ago I did a post about a Pleistocene horse-kill site that had been found in Alberta. This was the first Paleoindian horse-kill site ever found. A few years later a Paleoindian camel-kill site, also the first ever found, was located near by. The first assessment by Brian Kooyman, who excavated the sites, was that they were of Clovis age.

However, a new radiocarbon assay taken from the camel-kill site, indicates that the site is actually older than Clovis. Funding for the new study came from the Center for the Study of the First Americans at Texas A&M. (H/T Walter Hingley) 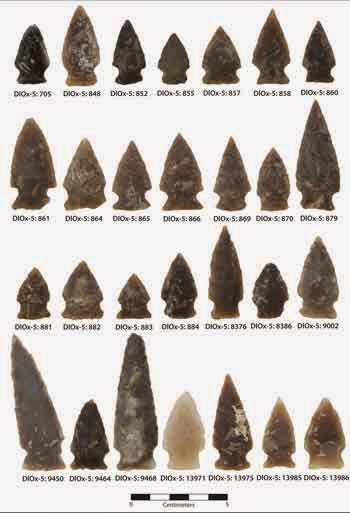 The second bit of news from Alberta concerns a bison-kill site that dates to about 2,500 years ago. The site is unusual for a couple of reasons. First, most Plains bison kills come in two varieties:

This site is apparent a very rare variety of trap, where the animals were caught in a bog or marsh.

Second, after the bison were butchered, some of the bone was treated rather strangely. The archaeologists found  eight arrangements of bison bones standing on end, perched in precise, almost sculptural patterns. I frankly had never heard of anything quite like that.

The projectile points shown above are mostly Besant corner-notched dart points that look similar to what we have in the same time period here in Colorado. The article talks about many of them being made of a type of stone found only in North Dakota, hundreds of miles away. Looking at this photo, it must be Knife River Flint, which was traded all over the Plains from Paleoindian times on. Archaeologists’ colloquial description of the appearance of Knife River Flint is that it looks like frozen root beer.