She’s not much to look at, some cross between livestock guardian dog breeds. Born on the range to working guardians, she’s lived all her 10+ years of life there, migrating with the flocks from the sagebrush-covered low country in winter, to the high country of the Wind River Mountains as the flocks move for summer grazing. Her hard pawpads carried her over more than 200 miles of trail each year, moving slowly with the seasons.

She’s a typical range dog, gentle and attentive to her ewes and lambs, while fiercely protective of canine intruders to her range. I’d crossed paths with her for years, as we sorted the range herds for shipping the lambs to market each fall, and as I visited the herds along the trail throughout the seasons.

Reserved with strangers, Old Mama slowly approaches her shepherds, standing quietly for attention for a few minutes before departing back to the job. The scars on her face reveal her persistent character – she’s not one to back down from a fight with a predator.

About four years ago, after lambing season, the flocks were on the move north, preparing to enter the wilderness, but Old Mama was swollen in pregnancy. One of the herders took her to the ranch where she had a selection of places to den to give birth to her pups. Our family’s flock was about seven miles north of the ranch, still within Old Mama’s home range. Old Mama stayed at the ranch a few days, but there were plenty of other guardian dogs already attending to the small flocks of sheep there, so she moved across the range, seeking that perfect isolated spot to give birth to her pups. She selected a rock outcrop high above a rugged canyon, five miles north of the ranch, but only two miles from our flock. 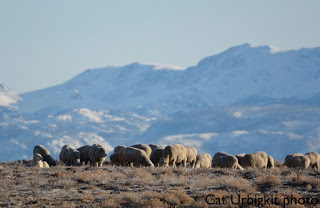 She appeared one morning near my flock, greeted by our guardians as one of their own. We could see she’d recently given birth, so Jim and I put out food for her, watched while she ate and then departed, headed back to the south. We’d had bears trying to get into our sheep flock nearly every night, but our guardians were persistent, keeping the bears at bay. One night, a bear moved to the cattle herd in the adjacent pasture, and the bawling of the cattle drew the attention of two of our guardians, which rushed to the rescue. I sat in the dark listening to the voices of our dogs as they were joined by a third, as Old Mama arrived on the scene. The three dogs worked as a team as they set to harassing the bear. The sounds of the night told the story: the cattle bawling, the bear roaring and bawling, with sharp barks of the dogs as they moved the bear away from the cattle and back into the forest. The night grew quiet, and my dogs returned, bouncing with excitement and adrenalin. Her work done for the night, Old Mama returned to her pups.

She made regular visits to my camp for food, and we eventually followed her back to her den, much to her outrage. We dug her growling pups from their rocky hiding place, and moved them to my camp, sticking the pups in a stock trailer with softened food and water. When Jim went to check the pups before daylight, he found Old Mama waiting to tend her litter.

We sheep producers often disagree with our guardian dogs about where they should have their pups, but we usually let the bitches have their way during that time they seek seclusion to give birth, waiting a few days before we retrieve the new families for closer supervision. This is nothing new to traditional shepherd cultures – guardian dogs give birth in primitive dens on the range across the world. Some shepherds put bells on the collars of pregnant females so they can follow the sounds of the bells to find the natal den.

I was glad Old Mama’s den hadn’t been found by anyone else. Someone might have thought this dog family needed “rescued” and taken them to a vet clinic or animal rescue in town, far from their rangeland home and away from livestock.

We and our rangeland neighbors have had various guardian dogs “rescued” on numerous occasions over the years – even within a half-mile of our house when the dogs were in the pasture with their flock, as well as a four-month old pup taken from its mother’s side while with its flock.

I used to be somewhat sympathetic to the good-hearted souls who thought they were doing the right thing. But I’ve grown weary of it. Just because a dog is not within sight distance of a house or herd doesn’t mean it’s been left behind or abandoned. Others see range dogs they feel are too skinny, expecting these athletic and hard-working dogs to be as fat as the dogs that live in their houses.

Granted, sometimes the predator situation gets so intense on our range that we have to rotate the dogs to force each dog to get some rest because the dogs will work themselves into the ground. When predators won’t flee, the dogs engage in fights, and getting their ears torn or bites on their front legs is rather common. The dogs will limp around for a few days – as would a human with a temporary but not serious injury. A few tablespoons of blood scattered down the legs of a bright white dog is a shocking sight to those who are not familiar with the lives of working dogs. Most of the injuries to the dogs are minor, and if they do require treatment, we can take care of it ourselves. Livestock producers routinely practice vet care on all our animals, and we have the medicine and the equipment to do so. Many times we administer care in the field, but sometimes the animals are moved back to ranch headquarters. More severe injuries, like those inflicted on our guardian Rena when she fought with wolves, are rare, and do require emergency vet care.

Old Mama rejoined us on the range last year as our flock grazed the sagebrush steppe along the foothills of the western front of the Wind River Range. When we gathered our animals to leave that range in late fall, we brought Old Mama with us to spend the winter months with our flock on a much smaller range. Cool as ever, she’s adjusted to the new experience, relaxing with the reduced workload that comes with the winter season, and leading her flock from their hilltop bedground to the haystack to wait for the sheep to be fed every morning.