I published a piece in the Angler’s Journal a way back, on the perils of your father’s being, or wanting in his heart to be, a sportsman and artist when you are one yourself. The published version is available. It is milder and more anodyne than my preferred version, which is as hard as my old man was.

Joe was a Swiss Border Italian whose parents came from the northeast shore of Lago Maggiore, where the scenery is gorgeous but as he said to me once you cant eat the rocks. Though born in Boston his first language was the local patois, a kind of latinate old- fashoned French; in the cities people spoke “Roman Italian” or Milanese Italian, considered ever  so slightly self aggrandizing  South of the Lombards and  such the people were considered Moors ; “Africa begins at Rome” was less a racial statementt than an ideological one; Federigo II had a Moslem army that he first defeated, then housed on Lucera on the mainland as mercenary shock troops; they were not defeated until his son and heir was.

(Although that Emperor was Sicilian to the core, he was also half German- a Hohenstaufen- and half Norman, a Hauteville. He also ran wild as a street urchin in Sicily til the pope decided at his majority to bend him to his will. THAT was  a plan always likely to work with the son of Constance and the grandson of Barbarossa…)

I promise I will get back to Frederic. But we are talking about my dad here. First the language. I recently read that most of La France Profonde before 1870, especially the South, spoke something “more like Italian” than Parisian French than they did; something like my grandparent’ tongue. It also recalls Villon in the 1200’s– the ing and ung endings- Ving for wine, “pung” for bread.  Pierre Stoyanovivich, Fabre’s heir and a serious lepidopterist himself, though a (very  rich but un-fancy) rich peasant (“un sale paysan, avec les mains sale, led doigts sale”, in the greatly distressed word  of Teocchi, the Italian- Parisian bureaucrat who ran the Harmas, Fabre’s old farm, for the government and wanted his specimen and letters- he was trying to get me to support his views to some German tourists, but my loyalty was elsewhere. Stoyanovich– he was 7/8 Provencal — not only looked like my Dad — he had his gestures, and my grandparents’ language. Why not? They were only some 200 miles apart!

Stoyanovich and The Priest, his old Resistance brother and rival; several versions of Dad 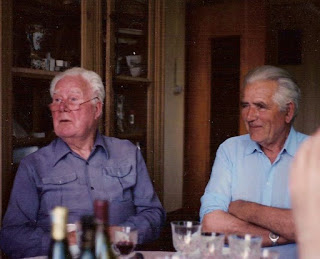 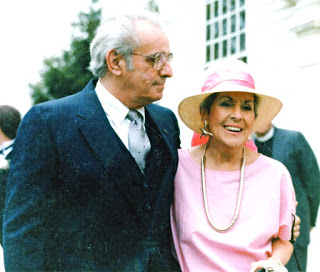 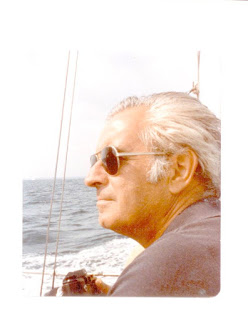 Language? Does your culture have a “Trotting Rhyme”– that is, one to the recitation of which you bounce your kid o your knee? We had TWO. One was “Trot trot to Boston..”; the other, reconstructed on the Internet by sound, was this. They SAY it’s Italian, but what does it sound like to your ears? 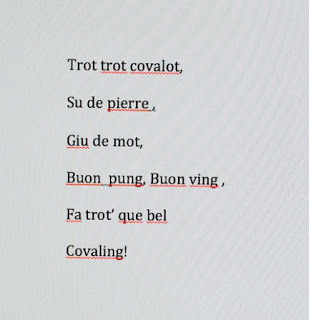 Finally, their and my version of the tale:
Angler’s text 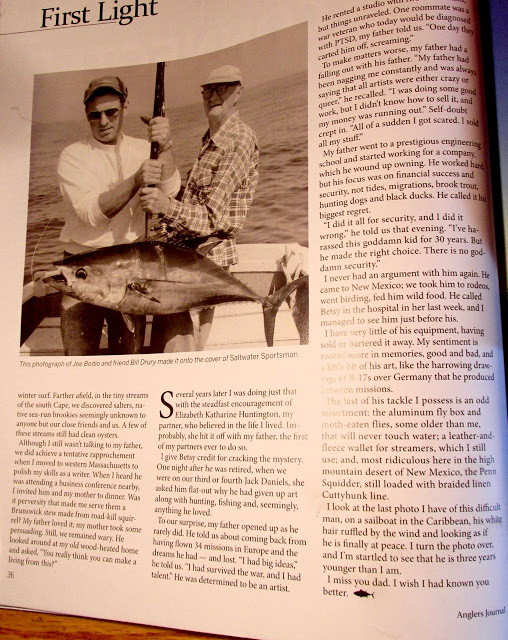 And mine, very different:

Betsy had been everywhere and had done everything and was
startlingly frank. Improbably, she hit it off with Joe, the first of my
partners ever to do so. It was all the funnier because he, whose precarious
prosperity was earned by a typical first-generation ethic of hard labor, tended
to call all Yankees with broad vowels “inbred overbites”. To which Betsy would
amiably agree. “That’s all right Joe. The Huntingtons and Trumbells are just
Connecticut Valley farmers who said ‘ain’t’ until the 1950s.”
And she cracked a mystery. One night she asked him flat-out
why he had given up art, and fishing and hunting, and, seemingly, fun.
We were on our third or fourth Jack Daniel’s. He said
“Betsy, when I came back from the war, it was a little early because I had flown
thirty-four missions. I had big ideas. I’d done my flight training in Roswell,
New Mexico, and hunted with a rancher there who had promised me a dog. He sent
me the dog on the train. I had bought an antique Cadillac roadster, and rode
off to Roxbury to show my old man what a swell guy I was.”
“I drove up and knocked on the door, and Rico came out and
looked at me and said “Get your Goddamn rich man’s dog and your Goddamn rich
man’s car off my lawn.”
“I didn’t care. I had survived the war, I was a scholarship
student and I had talent. In England, as a first lieutenant, I was an officer
and a gentleman. I rented a studio with the two most talented artists I knew.
One was a veteran, and one day they carted him off, screaming. He had what the
called “battle fatigue” in those days.”
“Then I started watching my other friend and realized that
he was gay. My father had been nagging me constantly and was always saying that
all artists were either crazy or queer. I was doing some good work but I didn’t
know how to sell it and my money was running out. All of a sudden I got scared.
I sold all my stuff and applied to Carnegie Mellon, and the rest is history. I
started in a company and ended up owning it, and as you know I lost a good bit
of it in the last crash.”
“I did it all for security and, you know, I did it wrong.
I’ve harassed this Goddamn kid for thirty years, and you know what? He made the
right choice. There is no Goddamn security.”
And he looked me in the eye and clinked his glass on mine.
I never had an argument with him again. He came to New
Mexico; we took him to rodeos, we went birding, we fed him wild things. He
called Betsy in the hospital in her last week, and I managed to see him just
before his. He might not have attained security; but he had some measure of
serenity. I have very little of his equipment, having sold or bartered it away.
My sentiment is rooted more in memory and a little bit of his art. I’d still
own an Alcedo Micron. The last of his tackle I possess is an odd assortment:
the aluminum fly box and motheaten flies, some older than me, that will never
see the water; a leather and fleece wallet for streamers, which I still use;
and, most ridiculous here in the high mountain desert of New Mexico: the Penn
Squidder, still loaded with braided Cuttyhunk line.
A photo of him stands on my desk, a portrait in profile,
obviously on a sailboat, the wind ruffling his white hair, sunglasses shading
his hair. He is in the place he loved best, off St. Croix in the islands. I
often think of it as the Old Man, or the Old Man of the Sea. He is four years
younger than I am now.

7 thoughts on “The Artist’s Son and his Discontents”