Conversations with Walter Hingley prompted me to bring out my favorite old fishing book: a copy of Thomas’s The Rod in India that I got from fishing writer Datus Proper, with its gold embossed figure of an Indian angler and a mahseer on the cover.* (Click all to enlarge). 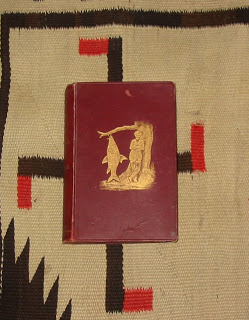 The mahseer was sometimes called “The salmon of the Raj” but it is more like a tarpon (though known for strength more than aerial acrobatics). Walter found the photo; the other from Thomas. 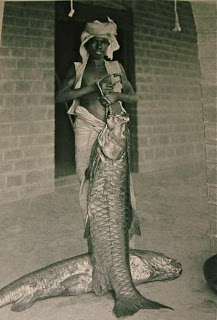 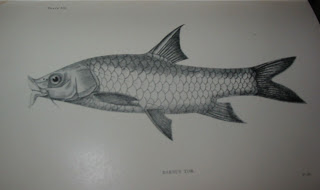 I wrote to Walter, who had told me of another book with “Circumventing the mahseer” in the title: “My copy of Rod In India is pretty remarkable — I haven’t looked at it in a long time. It apparently belonged to someone named Woods who was a member of the Rangers in Meerut and signed the flyleaf in March 1899; he also has some tackle opinions with which he has annotated the text. The illustrations are fabulous and there is a chapter on fishing with otters which compares, perhaps, with the one on cormorant training in Salvin’s falconry book of the same era. The chapter “Circumventing the mahseer” seems to be his own writing; perhaps it was an irresistible phrase.”

They also have a version of my favorite, if never chic, fish, the monster cat. 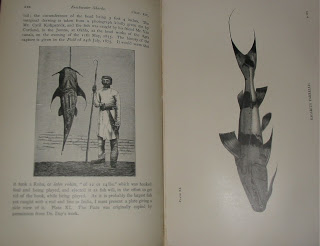 Today they still fish for several species of the mahseer, these days mostly catch & release. I am piscivorous, but the magnificent and threatened (and allegedly inedible) mahseer needs help…

Books like this transcend fishing and evoke a lost world. They sit on my shelves with contemporaries & friends like Kipling & his father and “EHA”‘s whimsical natural history (last a gift from David Zincavage). 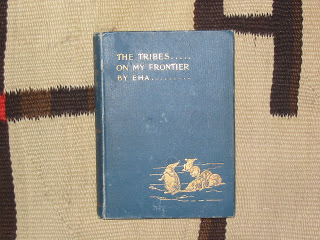 * Notice BTW the swastika- like pattern on the Navajo rug in the background, a common motif in both American Indian and Indian design– both Kiplings used it– before the Nazis perverted it.

Kipling, perhaps because of his (perceived) politics, still “can’t get no respect” from middlebrow critics and the kind of hacks who enjoy making up dismissive one- liners. He has fewer problems with actual readers– he is never out of print– or serious critics; in addition to the ones mentioned below, good recent essays on him have appeared from Christopher Hitchens, who hardly shares his politics real or imagined, and from John Derbyshire.

Still, it was nice to see a celebratory Kipling essay, “The Storyteller”, in the formidable Robert Gottlieb’s new Lives and Letters. They don’t come more haut- lit than Gottlieb– he was head editor of Knopf, Simon & Schuster, AND the NYRKR, not to mention a director of the New York ballet, is old enough to have known all the giants, and is uniquely qualified to review things in three or four fields in the arts.

On Kipling, Gottlieb quotes a letter from the always ambivalent, yet reluctantly admiring, Henry James ” ‘… His talent I think quite diabolically great.’ (James Joyce, too, as Norman Page points out in his invaluable A Kipling Companion, cited Kipling — along with D’Annunzio and Tolstoy — as one of the nineteenth century’s ‘greatest natural talents.’) Alas, James didn’t live to read those stories in which Kipling’s talent was to be applied to material that James would certainly have found more congenial than talking locomotives — in fact, on occasion, to semi- Jamesian donnees, as in ‘Dayspring Mishandled’.”

He continues: “James’s ambivalence about Kipling is particularly worth noting because it presages the ambivalence of so much of the criticism and comment to come. No writer of the period — except perhaps James himself — has been so worried over, so condemned and reclaimed. Certainly no writer of the period has had so many remarkable explicators, among them T. S. Eliot, W. H. Auden, C. S. Lewis, George Orwell, Edmund Wilson, Lionel Trilling, Randell Jarrell, August Wilson, Kingsley Amis. And there is important work being done on Kipling today — by dueling biographers and by outstanding critics like J.M.S. Tompkins and Craig Raine. Eliot was primarily concerned with reconsidering the poetry, but he shares with his fellow critics the urge to rescue Kipling — or to place him, their efforts underlining the fact that, given his “diabolically great” talent, he has to be acknowledged and dealt with. However difficult a specimen he is to pin down, and however much one may dislike aspects of his mind and manner, he cannot be ignored.”

The most interesting recent biographical work I have read is (India- born) Charles Allen’s Kipling Sahib.

As mentioned below, Rudyard Kipling’s father John Lockwood Kipling, artist and museum curator, wrote a book on Indian animals (Man and Beast in India, 1892) which includes a bit on falconry. Here is HIS gos. 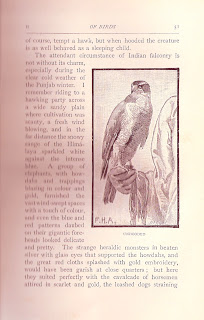 “He sat, in defiance of municipal orders, astride the gun Zam- Zammah on her brick platform opposite the old Ajaib- Gher– the Wonder House, as the natives called the Lahore Museum”.

The opening lines of Kim, of course. My friend Grayal Farr, formerly of the Special Forces, naturalist, archaeologist, and fellow Kiplingite (see Kipling’s “The Janeites”) was lamenting the fact that this line is not as well known as “Call me Ishmael” or “I had a farm in Africa” with me this morning, in the midst of conversation about bird ID.

Which serendipitous mix reminded me of the image below, given to me by my friend Catherine Lassez. She and her husband Jean- Louis, born in France but long- time Magdalenians, are Asia travelers too.

Kim takes place along the Grand Trunk Road, which leads to the Khyber Pass on the Afghan border– where Catherine snapped this falconer with goshawk in 1990.

There is a similar one pictured in Kipling’s father’s book on the animals of India, which he wrote at the Wonder House. 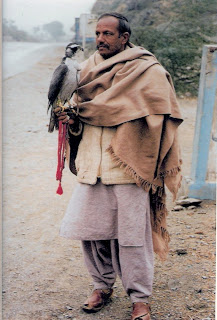