AfriCanis is the word used to describe the native dogs of Africa. Here is a sample of AfriCanis we saw in Lesotho. These dogs have a broad range of uses – from guarding livestock, to their use as hunting dogs. 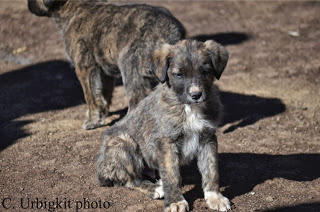 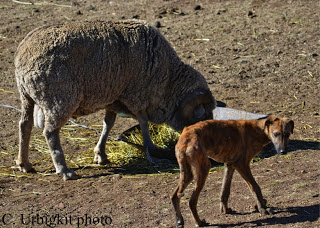 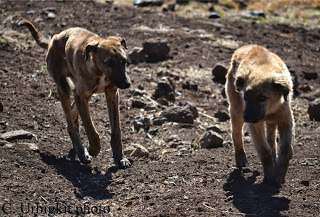 It’s taken me forever to sort photos from our Lesotho/South Africa trip, but now I’m going to flood the blog with images of dogs we met along the way.

These are the bigger dogs or livestock guardian type dogs that we met in Lesotho. The primary predators in Lesotho are jackals, but these dogs have also been exported to other African countries for use against caracals, hyenas, cheetahs, and even lions. 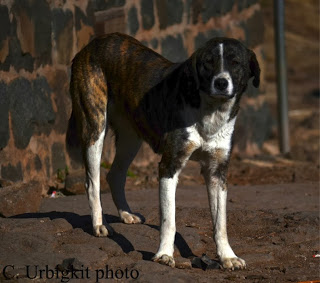 The following image is of a traditional Maluti guardian dog taken from Lesotho and now housed in a private kennel in South Africa. This young male is a two-year old.

Jim and I have just returned from a fantastic trip to Lesotho and South Africa. While we enjoyed our journey into the heart of traditional Zululand in South Africa (a future post), our arrival in the high alpine mountains of Lesotho was the discovery of Shangri-La.

The Kingdom of Lesotho is an independent nation entirely surrounded by South Africa, and is regarded as the highest country on earth, with its lowest point about 4,600 feet above sea level. We entered via the eastern route, crawling in four-low up rocky Sani Pass (formerly a footpath used by the San), at an elevation of 9,429 feet – the highest mountain road in Southern Africa, and home to the highest pub in Africa, where we stopped in for a hot lunch on a crisp and windy winter day (in late July, with spring just around the corner in early September). Most visitors that go in via Sani Pass stop at the pub for a photo and go back to South Africa, but they miss the beauty to be found just beyond, in the highlands.

We soon encountered men and boys walking with herds of cattle, sheep, and Angora goats, or riding hardy Basotho ponies, or leading their burros packed with 100-pound bags of maize. There are few vehicles in this mountain environment, but there are burro trails criss-crossing the rural countryside, and with access so limited, most items moving into and across this region are loaded on a burro’s back. Most people we encountered were accompanied by dogs (more on that later).

The first Basuto stockman we stopped to visit with along the narrow road as part of his herd of 900 cattle crossed in front of us spoke excellent English, and had a pack of assorted dogs eager for his attention. We soon learned that while his larger dogs serve as livestock guardians, he was doing some active crossbreeding to run jackals for fun. With our first encounter being with a man of sporting nature, we knew we had entered a place we would treasure.

The Basuto people who live in this rural region of Lesotho raise livestock and have a subsistence agricultural lifestyle. They are self-sufficient, and the environment is pristine, with no garbage or broken glass to be seen. They live in thatch-roofed, rock- or manure-blocked huts with thick walls providing excellent insulation. A family compound may have several of these huts for extended family members, with rock corrals at the center, where livestock and hay can be safely contained. Their dirt-packed yards are manicured to perfection by women using bundled brush as brooms.

Common everyday attire includes the traditional wool blanket. Different patterns, colors and style of wearing provide some symbolism, with women wearing certain colors, tied at the waist in a certain way, to indicate whether they are single or married. More elaborate or higher-quality blankets indicate higher status or wealth. Many Basuto people raise Merino-type fine-wooled sheep in this alpine zone, with communal shearing sheds busy processing herds in September. Some of the wool is sent to South Africa for processing, and returns to village stores as wool weft blankets. 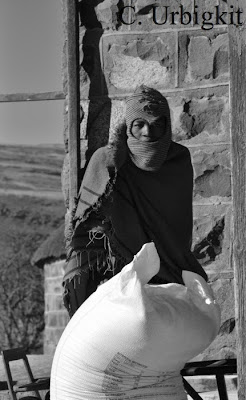 A few signs of modernity are evident throughout both Lesotho and South Africa’s Zululand. While these countries skipped landlines (and most don’t have computers), most people have cell phones. (There are more cell phones subscribers in Africa than in the United States or the European Union, according to the World Bank.) Nielson reports that South Africa ranks fifth in the world for mobile data usage – while the United States ranks seventh. More people in South Africa have cell phones than have access to electricity, or clean water, or indoor toilets. Cell phones have become a lifeline in many ways, including linking people to clinics and doctors as these populations struggle with high levels of HIV/AIDS and tuberculosis. I should note that while I’ve seen the high statics for these diseases, of course we never saw visibly sick people. What we did see were hundreds of women walking for miles with their babies on their backs for vaccination days at rural clinics. Availability of these clinics is transmitted via text message, as are TB results and other critical information, as well as school and public bus schedules. (Buses, as well as “taxi cars” are four-wheel drive vans.)

Enclosed pit toilets are making their way into the rural areas of both Lesotho and South Africa – these are new innovations in these areas, and are constructed as community projects, promoted by government and NGO programming. We also saw community wells being installed, especially in the hills of Zululand. South Africa President Jacob Zuma’s home province of KwaZulu-Natal has especially benefited.

Lesotho’s rugged, kidney-bruising Sani Pass Top road is currently being blasted and widened to allow better access to the eastern portion of the country. The steepest, narrowest part of the road is being widened also, but you still can’t get more than one vehicle around the corners at a time and I don’t see that improving in the near future. Water runs down cracks in the rocks year-round, so drainage culverts are being installed. A major Chinese construction firm is doing the work on a 26-mile segment of the road, with the goal of providing a better link from South Africa to the Lesotho village of Mokhotlong. But some wonder whether there may be plans for future mining or water development driving this major investment in an isolated region. Portions of the road have been improved to be as large as a major mining haul road, so these concerns may not be far-fetched.