Here are some of the things that have happened in the last two weeks:

Finally, we got an appointment with Dr. Jill Marjama-Lyons, a new neurologist, who came highly recommended. When we got in — she has a long waiting list — she mentioned, as we suspected, that one of the electrodes was in the wrong place in my brain. She had other things that she wanted to discuss with us, and suggested we come in the following Saturday morning before her karate lesson. This involved us getting up and leaving before dawn, but we had little to lose. For one thing, I was now seized up about half the time. She has a lot of Japanese art in her office, and I mentioned my falconry. She asked me if I knew Bodie Littlejohn. When I replied that he was a dear friend, she answered that she had been studying swordsmanship under him. The next morning we got there in time, but having had a long drive and coffee, I couldn’t urinate. She banged impatiently on the door and demanded “Hurry up! I’ve got to get to my karate class. When I got out of the men’s room, she started doing the adjustments while I was still in the wheelchair I had used to get from the bathroom (I HATE wheelchairs!) without my taking the time to get me comfortable.

But I was not bored. First, she did something interesting. She ran each channel out to its “edge” where the charge made me physically uncomfortable and unable to speak. She was apparently mapping the scope of my gizmo. She kept muttering that she would have liked to have done the job herself. When she finished, she told me to come back in a few weeks so she could reprogram the other side. She also confirmed that one of the electrodes was in the wrong place, and told us that all the controls had been switched left to right. We talked (she is also a shrink) about how she might fix this. She spoke to Libby of my being a driven perfectionist who is never satisfied, but I think it takes one to know one!

Three miles from the office, my tight painful legs became loose and I “cleared up”. Except for one sick day (see below) , I have since been free of freezing. Previously I had been frozen about half the day. A half hour on one electrode had done more for me than 2 ½ years of therapy. Afterwards she talked to Libby on the phone and asked if I wanted to try another operation in which she would remove the electrode in the wrong place and put a new one in. Despite more danger, I’m up for it.

Earlier this week, the Wilderson brothers came by with their usual fund of stories and info. I took them by the old Pueblo ruins, John Besse’s, and the bar, rather more social life and outdoor life than I have been used to lately.

I got tired when they were here, and felt sick when they left; I did not know what was going on. I had a bad neuro day, and ended up passed out in the bathroom at 2 AM, raving! I was taken to the ER in Socorro by the ambulance crew, driven by the mayor, where I found out that I had a deep-seated urinary tract infection, probably left over from the hernia operation which has been rife with complications including infections. I suspected something was still wrong, but everyone tried to talk me out of it.

I am now taking antibiotics, am again not freezing, and scheduled to see Dr Jill early (tomorrow!) My old Aplomado has just laid eggs. I sold a bunch of my rare books and am retrofitting the house to make it more Parkinson’s- friendly, with help from friends. Life is interesting.

Libby found a link to Tom Russell’s paintings, mentioned below, at Rainbow Man gallery in Santa Fe. Good bio too. 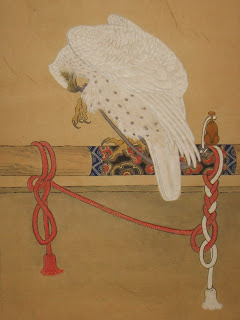 On the Edo era: David Zincavage links to an Economist piece by one Henry Tricks that starts in tranquility but ends more darkly:

“There is a deep-rooted respect for others, so ingrained that ground staff at Narita airport bow to departing planes as they taxi to the runway. And there is a subtle coercion, like an invisible hand on society’s collar, based on centuries of ancestor worship that has made many customs immutable. The attitudes have been shaped partly by the physical landscape of Japan, which packs one of the most crowded populations on earth onto narrow plains, bounded by sea and inhospitable mountains. For centuries the main activity has been rice farming, which requires communal planting, weeding, watering and harvesting, rather than the rugged individualism of American and European agriculture….”

“At times it feels as if the outside world does not exist. …

[I]t is the Edo era, the peculiar two-and-a-half-century time capsule from 1603 to 1868, that casts the longest shadow. It was the time when a newly unified Japan turned its back on the outside world, shut its borders to almost all foreigners, stopped its people travelling abroad and forbade Japanese émigrés from returning to the country on pain of death. Each person was given his exact rank in society–in descending order: samurai, farmer, craftsman, merchant and outsider—and Japan went for 265 years without wars or revolutions. Much of this era is known as the sakoku jidae or “closed-country period”, and it was centred on Edo, now Tokyo, while the emperor was cloistered in Kyoto. At first glance, it seems like the epitome of the dark ages—a medieval equivalent of North Korea or Pol Pot’s Cambodia, ruled by an all-powerful family of shoguns, or military dictators, named Tokugawa. They handed on power for 14 generations, and kept the citizens in line through a byzantine network of spies and informants. The execution grounds can still be visited in Tokyo. Ordinary criminals might be crucified, boiled, burned or chopped in half: only the lucky samurai got to disembowel themselves.

“The gore, of course, has gone, but it seems to me that something of the Edo era shimmers just below the surface of modern Japan.”

Not every society, even one that produces great artists and warriors, harbors the same dreams. Nor are all worthy ends worth some prices. But perhaps in times of terrible travail, as Japan is undergoing now, social cohesiveness may be an advantage…