I am always amazed how, as society becomes more complex, it inevitably seems to want to control not only your life but your animals. Various reasons may be given– animal welfare, neighbors complaints, disease (“Mad Cow”, SARS, Avian Flu). But the end result is virtually always to confiscate, prohibit, even kill “uncontrolled” and unpopular animals,. (The late Vicki Hearne, poet, animal trainer, and philosopher, used to say sourly of seeing roadkill dogs in the South that at least they hadn’t gotten around to eliminating them all for humane reasons– yet. She also said that animal rights people saw animals only as “cute” or victims, which may or may not be another point.)

Paranoid? You bet! In my own experience: when Libby was living in Bozeman– Montana!– we had three dogs. The ordinance said you could only have more than two if all the neighbors didn’t object. One neighbor hated dogs. A town cop came and told us just to have one put down! We eventually took it to court. Luckily, lawyer friends took us on for free, because the case, which we won, cost $27,000, which the city had to pay.

They came to me that day and said, “OK, you beat us on the dogs. Next, we’ll go after your pigeons. And if that doesn’t work, your hawks”. Luckily, we were already Magdalena bound. Now, both bird species are SPECIFICALLY banned in Bozeman.

The feed store guy said to us sadly, “This used to be Montana”.

Then, in Magdalena, a newcomer on the City Council introduced an ordinance that would have banned all “exotic and farm” animals and birds (the town is full of chickens, goats, sheep, and horses, being in rural New Mexico), plus as in Bozeman limit us to two dogs. She also wanted to have anyone pay $150 for any animal born, INCLUDING EVERY EGG LAID. Absurd? Keep reading! At least in Magdalena she was voted down, for the time being.

Recently Will Brown of Blue Ridge Biological, a scientist, artist, and keeper of pigeons, sent me an article that was originally published in The Poultry Press.. By Mary Zanoni, a Yale and Cornell PhD who heads up a new organization called Farm for Life (no link yet, but a PDF of the paper, which contains addresses and a place to sign up for a newsletter, can be downloaded here) “Why You Should Oppose the USDA’s Mandatory Property and Animal Surveillance Program” is nothing less than frightening. And remember, nobody has voted on this– it is entirely administrative, within the USDA.

She begins: “For several years, the USDA has been working with the largest-scale animal industry organizations (for example, the National Pork Producers, Monsanto Company, and Cargill Meat) to develop a mandatory “National Animal Identification System” (“NAIS”).
(Snip)

“By January 1, 2008, the NAIS will be mandatory. Every person who owns even one horse, cow, pig, chicken, sheep, pigeon, or virtually any livestock animal, will be forced to register their home, including owner’s name, address, and telephone number, and keyed to Global Positioning System coordinates for satellite monitoring, in a giant federal database under a 7-digit “premises ID number.”

”Every animal will have to be assigned a 15-digit ID number, also to be kept in a giant federal database. The form of ID will most likely be a tag or microchip containing a Radio Frequency Identification Device, designed to be read from a distance. The plan may also include collecting the DNA of every animal and/or a retinal scan of every animal.

“Third parties, such as veterinarians, will be required to report “sightings” of animals. In other words, if you call a vet to your property to treat your horse, cow, or any other animal, and the vet finds any animal without the mandatory 15-digit computer-readable ID, the vet may be required to report you.
(Snip)

“If you think the description [above] sounds too bizarre to be true, please go to usda.gov/nais, read the Standards and Plan, and check the citations.”

I think her conclusion below is realistic, not paranoid, as it would be virtually impossible for most small breeders to comply with, never mind the civil liberties implications. And such simple pleasures as pigeon racing and State Fair animal shows would become illegal.

“The NAIS will drive small producers out of the market, will make people abandon raising animals for their own food, will invade Americans’ personal privacy to a degree never before tolerated, will violate the religious freedom of Americans whose beliefs make it impossible for them to comply, and will erase the last vestiges of animal welfare from the production of animal foods.”

Weird historical note: such things have happened. I am a great fan of the ancient and grotesque “Thief Pouter” pigeon breeds of Spain (I wrote about them in Aloft– see books to the left). They flew fom their home lofts to “seduce” your competitors’ birds to your home.

The dicator Franco, from a 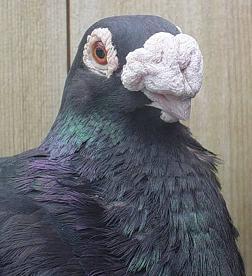 combination of dislike of the rebellious southern countrymen and a fear that they could use the birds to communicate, simply banned their flying, and in some cases just banned whole breeds (from the Thirties until his death). I quote from the “Clandestino” pouter site “Franco only sanctioned the Suelta sport [ a modern sport with no homing involved] and the “Modern” Spanish thief pouters used therein, and banned all other thief pouter breeds from ever flying. The breeders of the various traditional, working type Spanish thief pouter breeds were forced to make a decision: give up their birds to the Suelta sport or organize a club to promote their once working birds as show birds only, so that they would no longer be persecuted by the dictator and the many avid followers of the Suelta sport. Most thief pouter breeders caved in to the pressure and began breeding their birds to fit the newly created show standards for each breed; but a handful of people refused to put their working birds into the show pen and continued to secretly breed and fly their birds as thieves (the original purpose of all Spanish thief pouters).”

One more thing: the USDA program is getting a lot of support from those who fear Mad Cow. The way to stop that is to stop feeding animals to cows, period. Wouldn’t that be a better rule? Similarly, on Avian Flu: easy: don’t allow your birds access to other birds when it is about. SARS? It’s a Chinese bat– more on that coming, next post….

Update: Matt Mullenix has sent these sites where you can go to check the government’s own info/ propaganda: http://www.usaip.info/ — and : http://animalid.aphis.usda.gov/nais/index.shtml

11 thoughts on “Animals and Government”