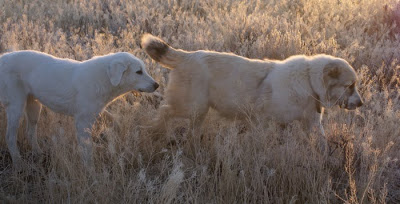 As I’ve mentioned before, livestock guardian dogs in this region have been taking a beating when it comes to wolves – actually more than a beating, since plenty of them have been getting killed as they actively engage in fights to protect their herds. Jim and I are re-assessing the breeds of LGDs that are being used in this area, and looking into acquiring bigger dog breeds that have a history of protecting livestock in countries with wolf populations. These wolf-fighting dogs include the Central Asian Ovcharka (Aziat or Tobet) and real Turkish Kangals, along with a few others. We need a big dog that is very canine-aggressive, but not human aggressive. We’re developing a plan to try more of these dogs, but with the dogs come somewhat of a dilemma: ear and tail docking. In their countries of origin, the ears on these dogs are docked, and the tails are docked at the mid-way point. The reason is not cosmetic, but because these are areas where wolves will bite the dogs, scalping them by tearing their ears back. We’ve seen videos of LGD/wolf fights where there was tail-grabbing as well, and we’ve seen our dogs use this tactic in fights. Share your views on this docking practice, but please, no rants about the practice of docking for cosmetic purposes, because that has nothing to do with the issue we’re considering. We’re trying to decide if the benefits outweigh the general dislike of the idea of whittling on animals.