Central Asia is full of archaic survivals, which include old technologies (should that be “technologies” with quotes, to include animal memes like hawking and various “old ways“– thanks Liz Thomas!– with dogs and other animals as well as actual “tech”?)

China controls guns but Tibetans actually still hunt with matchlocks (and tazi- like dogs though the pix have vanished).

17th century snaphaunce patent flintlocks were common in Siberia in 1865 when Cherkassov wrote his “Notes of a Siberian Hunter”– he called them “primitive” and gave these illustrations. 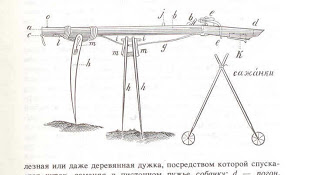 But they are still in use in Mongolia today! Here is Kent Madin of Boojum Expeditions shooting one of Cherkassov’s designs ca 1996 (photo by A Jackson Frishman– Peculiar); and one I brought back that looks like his other drawing. 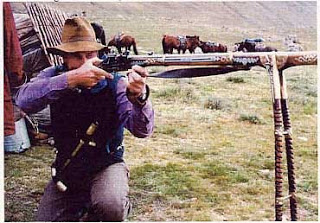 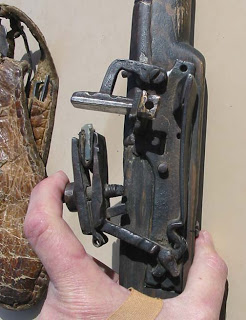 Cat saw this nice one for sale in the shop at the Natural History Museum in Ulan Bataar. I would have bought it– must go back… (Not just for flintlock scholarship of course). Enlarge and you will see it is the same design as mine but finished much better. 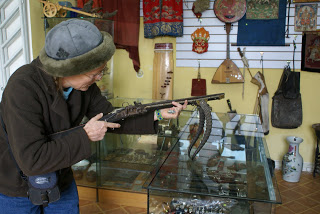 And horn-style bipods go on everything from matchlocks to Mosin Nagants. Here are some from explorer Leonard Clark. Maybe I should also retrofit an old Mosin. 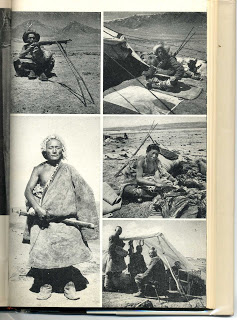 Incidentally I should add re costs: my flintlock, shootable but for missing trigger, cost me only $50 in 2000, with all tools (below)– this in a touristy shop in Ulan Bataar. Such guns are still made by village blacksmiths using forges that burn dung for fuel. 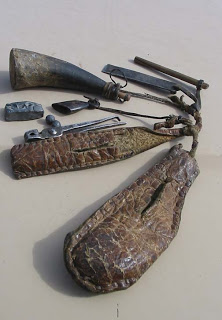