My more fanatic readers might know that, years ago, I published several articles in The Atlantic, most importantly a cut from Eagle Dreams that was later selected for Best American Travel Writing of 2002.

Shortly thereafter, the magazine was sold to new owners, and I received a correct but cool letter informing me that my kind of writing (whatever that is) would no longer be welcome there and that, more comprehensibly, that they would be relying more on staff.

I was a bit hurt but such things were, I assumed, routine; my good editor had departed to (!) Vanity Fair. For along time I thought little about it, though I was mildly perturbed by the amount of Animal Rights- toned remarks and even stories. They also hired one or two vegan writers (not as far as I can see to write on AR or vegan topics) and published a few reviews reflecting such viewpoints. Their wonderful and carnivorous food writer Corby Kummer (our four beast two- day South Italian red sauce owes much to him) was not fired but relegated mostly to the cyber version.

What crystallized my growing suspicions was an article attacking what the writer called “foodie gluttony”. I can accept that Anthony Bourdain might not be to everyone’s taste (though he is the skinniest glutton I have ever seen— see photo below!) But earnest, Green, “eat mostly vegetables” Michael Pollan?? As far as I can see his only sins are to eat good meat and to have tried hunting…

My suspicious nature wide awake now, I found explicit confirmation of the magazine’s quite unstated editorial bias in the July- August issue. In a review of the life’s work of childrens’ book author Beverly Cleary, Jonathan Schwartz, the magazine’s literary and national editor, who arguably sets the tone and certainly decides, for instance, what books are reviewed, says:

“For instance,Henry feeds his dog horse meat, as kids did in 1950– a fact that my son, raised an animal welfarist and a vegetarian, has to reconcile with Henry’s likable and admirable qualities.”

WTF?? I can accept that they don’t want me, and have the right not to buy my work or ideas. I feel a little worse about not having any likable or admirable qualities. But does he, or the otherwise mainstream magazine, reject all carnivorous readers, even those with demonstrably good environmental histories like mine? Where does he stand on, say, domestication? Should my dogs be vegetarian or simply not exist? I think if the magazine actually espouses such an agenda those of us who buy it should be, in the interest of candor, informed. I for one have doubts about renewing.

Below, Libby and a more famous glutton: 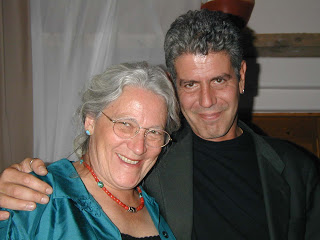 Steve Grooms, the man who wrote the book on pheasants, is reluctantly giving up his gun. 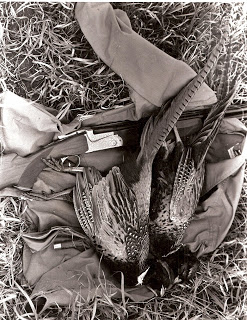 “12 gauge with 2 3/4″ chambers, 26” barrels bored improved cylinder and modified. The barrels (at least on the inside) are chrome. I never messed with the chokes. Because the gun shot so well for me I was afraid to pattern it and possibly learn something that would mess up my head. What I can say without reservation is that these barrels, when fed a premium shotshell with #6 shot, put out a pattern that is absolutely devastating for pheasants at any reasonable range. This is one reason I regard this as the perfect pheasant gun. The first barrel kills roosters at all sensible ranges without destroying the bird for the table. The second barrel is about the same, and it reaches out pretty far with quality shotshells.

“Weight: this is an issue, since I don’t have an accurate way to measure it. I used to think the gun was a bit over 7 pounds, but all the SKBs I find on the internet have greater weights (but usually longer barrels). I think the weight is probably 7 pounds 6 ounces, or something close to that. I always carried the shotgun one-handed like a pistol, and I am not a muscular guy, so you know it couldn’t be as heavy as the weights I see on the internet. I think later SKBs were made differently from these Ithacagun imports and were heavier.

“The stock is factory standard specs. I have NO idea why this gun–so standard in so many regards–shot so amazingly well for me. The first shot I fired from it was with a portable cocking trap. My buddy didn’t know how to load it properly, so the bird came off the machine at an incredibly sharp angle. I smoked that bird, and I was so amazed that I’d hit it that I just stared at the gun and asked, “Where have you been all my life?”

“My one modification was to put a linseed oil finish on the wood. It came with that awful urethane finish that I’m sure you have seen. That stuff chipped off, especially after my disastrous swamp crossing. So I refinished the wood, and I think I did it well. I cleaned off the plastic finish and then put four or five thin coats of linseed oil on, rubbing the wood in between applications. The wood is not fancy, but is FAR superior to most SKB stocks of the time.

“I don’t know how to rate the condition. There are no big gashes or unseemly cuts. The finish has held up well. There is no bluing, so the bluing has not worn off. That silly fluorescent pink front sight has lost its glow. I guess. I never see the front sight when shooting. The gun has obvious marks of a life of use, but nothing ugly, nothing nasty. The action is as tight as the day I got it (I hear some folks call these guns the Japanese “Merkel”, with Kerstin crossbolt and side bolsters.

“The action is single selective trigger. It always works. The ejectors are selective and never failed to perform perfectly.

“I’ve been trying to figure how many roosters this gun took. I shot it for 30 years, and there were years when it claimed 100 roosters. I think a grand total of 700-800 roosters is realistic. And I’m not talking about those pathetic things on commercial game farms. My birds were all wild, many of them coming late in the season when the game is so difficult. I can remember shooting eight doubles with this gun, one of which was almost a triple because I reloaded so fast without moving, but we’ll have to call that a double and a single! A couple of times I went a whole season without missing.

“If I know the name of the buyer, I’ll autograph a copy of my Pheasant Hunter’s Harvest for that hunter.

“My personal opinion (highly biased) is that this is the perfect pheasant gun. I sometimes regretted that I couldn’t change the chokes. But guess what? The IC/M combination is right for most pheasants in most situations. Just when you change to a tighter choke because it is late in the year and the birds are jumpy, you step on a rooster skulking in the snow and if you put in a tight choke you better be prepared to wait a long time before firing. In other words, the fact the chokes are fixed means you cannot over-think things and make a choice that is not as good as the IC/M standard.”

Steve B again: Pheasant Hunter’s Harvest is one of the best books on pheasants in the USA ever written, if not THE best, is full of tales and photos of this gun, and contains the wonderful (and frightening) essay “A Cold, Lonely Death” I later included in my anthology The Art of Shooting Flying. This book and this gun make up to a once in a lifetime deal. If you are interested (serious offers please), contact Steve at: mnstorytelr@comcast.net

Tom Russell emailed to say that George Kimball, our greatest boxing writer and a damn brave fighter himself, died the night before last after a seven year battle with cancer, during which time he wrote or edited five books. I most recently linked to his website and books in this post here (scroll down).

Like most larger than life figures, he embodied contradictions. He was a radical in politics but a traditionalist in most matters– see his remarks on Dickens in the links; a lifelong vegetarian who was a fan of my writing on birds of prey (one of two– Sy Montgomery is the other– I know of). Stories by his friends here and here will give you some idea.

We hung around many of the same bars in my youthful days but I was in too much awe of him to approach him– and maybe a bit scared. That story about his “keeping an eye out for you” (or on you) was already making the rounds then, as was the one about how he covered the Boston Marathon by stopping at every bar en route. There are a LOT of bars on that route.

We never met, but in recent times he had generous things to say about my writing. Thanks and adieu– and may “the sacred ginmill” never close…

Hawk is learning fast. He actually JUMPED to me after this pic– with his weight completely un- reduced! 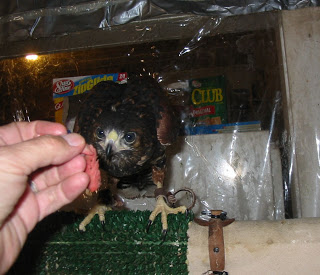 Has anyone any name ideas? Somehow it has always been difficult for me to name birds… 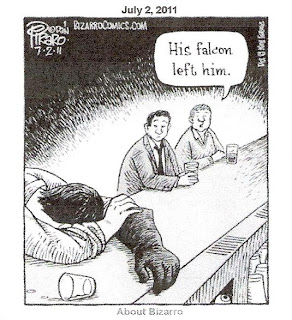 I was reading an article in Slightly Foxed, an excellent English quarterly devoted to neglected writing, and I came upon this quote from Marghanita Laski’s 1949 Little Boy Lost that both amused and chilled me because it is still so true:

“To him it was inconceivable that an intelligent man should be happy to live in a provincial town and talk about everything in the world with people less intelligent than himself. Automatically he found himself deciding that Monsieur Mercatel could not be as intelligent as he had supposed, that he must be a man who was good on his subject and negligible outside it.”

Says something about the attitude that many at, say, the New Yorker still have toward “Flyover Country”, despite such writers as Annie or Jim… condescension is something we all face.

(I should add that SF ran an essay on Q-the- book a while back, obviously having no such prejudices!)

My first Harris, from Matt Mitchell. Something of a revelation as despite the fact he never saw a dog or a human other than Matt until he arrived here 40 minutes from his natal chamber, he is calm and considered. Intelligent bird! And I hope my “shotgun hawk”, like my light 20 enabling my continuing pursuit(s)…

Re blogging: be patient please! A lot on my plate but a lot coming… 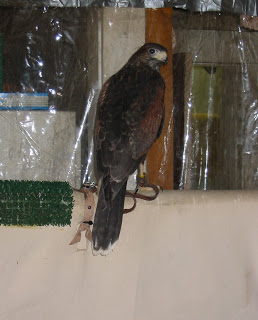 What is it Dr Johnson said? Tom McIntyre wrote this week, in a note:

“Money, money, money, yes. It may not be able to buy you happiness but poverty sure as hell can’t either. I would just like to have the time (which means the money) to write only what I want, not what I must, or rather only what I must because it is the “I” and no other concern making me do so.”

“The plural of anecdote is not data.”

(Patrick Sweeney in G & A, attributing it to an engineering prof, though it is everywhere applicable…)