Steve and Libby are in Wyoming on a week-long trip to attend a Jackson Hole wedding, so I managed to kidnap Steve for a few days of visiting our western Wyoming range country. The photo above includes Steve and Libby, and Cat and Jim Urbigkit.

Steve was given the proper introduction to this wild range as we drove through the Bondurant basin to see teams of draft horses cutting hay, and we met one of Cat’s old friends, a local cowboy, in the Bondurant post office. Continuing south to Cat and Jim’s, Steve was met by an empty wine bottle on the step (left over from the evening prior) and a dead prairie dog in the yard, compliments of guardian dogs. Steve was able to meet the sheep, burros and guardian dogs, as well as see a variety of raptors, cranes, pronghorn antelope, sage grouse, and even a pygmy rabbit in the wild (something few have seen).

Steve gave a public presentation at the Sublette County Library in Pinedale about the ancient relationship between man, bird, horse and dog which was well received by its audience. After being so well behaved, Jim and Steve then proceeded back to the ranch to drink vodka like Kazakhs, so by the time we deposited Steve back with Libby on Saturday, he was indeed slightly worse for the wear, but a good time had been had by all.

Here’s Steve out in the sagebrush country near the Big Sandy River, with Tabernacle Butte in the distance.

Writing in the Lonsdale Libary volume Hound & Dogs in 1932 (ed. A. Croxton Smith), Brigadier-General F, F. Lance said: “The Saluki varies in type according to the country from which he comes. He covers a very large area, extending from Northern Africa to India and from Arabia to the Steppes of Siberia.”
(Emphasis mine, as seems to be needed if not for my regular readers.

He also mentions the existence of both feathered and smooth varieties, and seems to rightfully consider the country Afghan of the day just another variety (good examples of them and first- hand accounts of using them with saker and goshawk on gazelle elsewhere in the book).

The Lonsdale Library was the official voice of the English sporting establishment, which still knew something back then, at least about dogs…

Annie D sent an anonymous web mail of over- the- top- birds. One is of my favorite wild pigeon, the Nicobar (Caloenas nicobarica) of the east Indies. I’d be glad to credit it–? 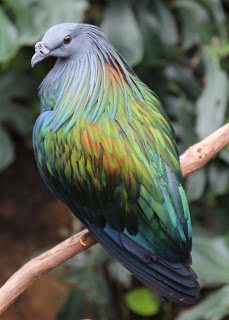 We’ve worked far too hard lately, and everyone felt the need to blow off a little steam last weekend. What better way than to load up onto the back of a flatbed ranch truck and take a tour of our booming prairie dog town (located just outside our yard). The weekend involved a variety of weapons and family members. The cast of characters above includes husband Jim, son Cass, and nephew Kyle. 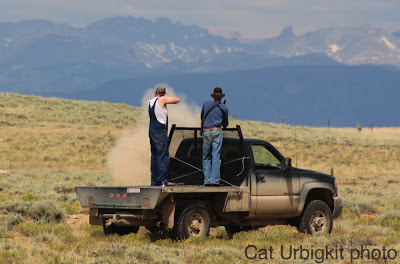 Although weapons passed back and forth between all involved, 20-year old Cass moved some dirt with an SKS. 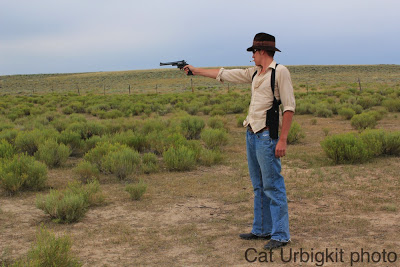 Kyle had kind of a Dirty Harry vibe going on with a S&W .44. He’s 26 and freshly out of the military.

Husband Jim proved worthy of the biggest bragging rights. He succeeded in killing several prairie dogs with his bow and arrows. Instead of broadheads, he was using target tips! At first, the arrows just bounced off the prairie dogs, but then he got good at it. In this photo, Kyle’s “got your back.” 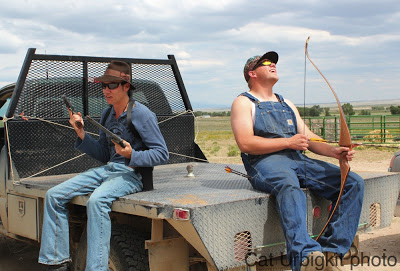 Cass and Kyle were both so well dressed I had to laugh. What a couple of goons! Anyone driving by probably thought we were crazy. We are, but it sure was fun.

Birmingham, once one of the greatest gun centers in the world, has renamed its gun quarter.

“One of Britain’s oldest industrial areas has been renamed after council leaders claimed local people no longer wanted to be associated with the weapons of war.

“Opponents of the name change say the Gun Quarter has been sacrificed on the altar of political correctness.

“But the move has been approved by council cabinet member for regeneration, Tim Huxtable, who said he was simply responding to public opinion.

“Evidence produced by the council to back the move included a report from the Newtown Neighbourhood Forum claiming that “it is not wise” to retain the Gun Quarter because the area has suffered from gun crime and the name is also associated with the arms trade.” (Arms trade? Well, of sorts– see below).

The two parties did not line up as you might expect:

“The decision resulted in Coun Huxtable, a Conservative, being accused of political correctness by Sir Albert Bore, leader of the opposition Labour group.

Sir Albert (Lab Ladywood) said: “What kind of nonsense is it when we replace the Gun Quarter with St George and St Chad?

“Like it or not, and I am not into the arms trade myself, the Gun Quarter has a historical connection with this city. This is just political correctness.

The locals seem generally unhappy. “Pauline Luke, who worked for 30 years in a company in the Gun Quarter, said the re-naming was “ridiculous”.

“Making guns is part of our heritage and something we should be proud of, not ashamed of,” she said.

“Her boyfriend, John Dangerfield, said: “Calling it after St Chad Cathedral makes sense but not St George – wasn’t he all about slaying and killing people?””

HT Vic Venters. And full disclosure: I own a Birmingham gun.

One more thought re Brit pop culture: not all that long ago, when Tom Baker was Dr Who, he could evoke knowing grins as he took a punt gun into the sewers of Victorian London to use against Weng Chiang’s giant rat, “made of good Birmingham steel”. Of course he also mentioned a fish dinner with the venerable Bede in the same episode…