A few photos from a recent visit by my friend Chuck from Houston.  Chuck has hosted me in the past and shared his fields, and I was glad to be able to return the favor last weekend. Chuck flies a very good Red-tailed hawk that is just starting its seventh season, and a Red-shouldered hawk also, now in its second season.

The Red-shouldered hawk, a smallish wetland Buteo (650g), is not often flown for falconry, but is extremely common in the Southeastern US and is a generalist predator of small mammals, reptiles and birds.  The Red-shouldered is also a close relative of the neotropical Gray Hawk and Roadside hawk, two species regularly and successfully flown by Latin American falconers.

Ms. Elbert, as Chuck’s Red-shouldered is called, flew very well off the carry pole, catching a house sparrow and a cotton rat in quick flights. 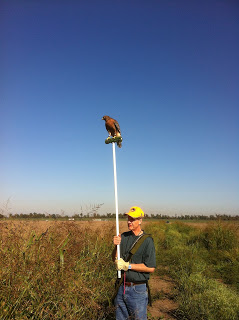 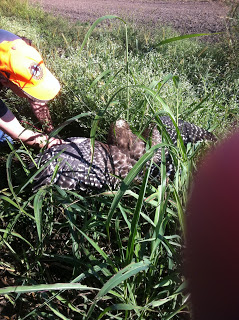 l
She is also a very handsome little hawk, shown here with comparison to my Harris’s hawk Ernie (who caught similar game—here shown on “tip-toes” trying to catch a glimpse of the strange hawks come to visit) and Chuck’s Red-tail Cisco. 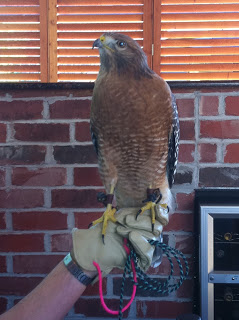