This may only interest writers and other word- mad wretches..

But I recently unearthed a 1940 postcard of the Tokyo Olympiad (?) written on but never sent by Virginia Huntington, Betsy’s mother and the bishop’s wife.We NEVER made any sense of it- creative interpretations encouraged. (She was also a rather awful, but published, poet, if that helps).

The last is emphasized because it is just a bit out of place…?

First time I met her she held my face close to her thick glasses and asked “How many brothers and sisters do you have?” When I replied “eight, all younger”, she grinned wickedly and said, “Ahhh– Roman Catholic I see…’

I have many more tales. I should add that while she was a “bells and smells” Anglican in the end, she was born a Mennonite, joined the Church of England, became a nun, went to China, and married her bishop…

I was asked by email if I knew anything about the history on my Italian side. Not from books is my answer. Bodios (and my grandmother on that side, Sylvia Arzeni) came most recently from Ispra on the east shore of Lake Maggiore a few miles south of the Swiss border; a village called Bodio sits on the river that flows into the north end of the lake, in Switzerland. I am always interested in info from the region. There is a sub- Alpine tunnel there, and here is a pic of, well, a car wreck. 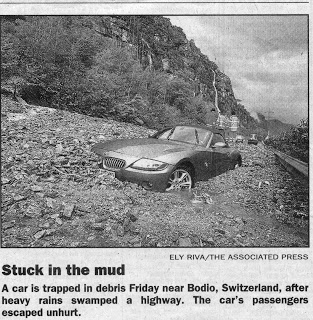 My grandparents’ generation spoke “real” Italian and often German, but at home a “patois” (their word) that resembled the French that folks of the same age spoke in Provence when I was there in the 90’s, including “ng” endings like the Medieval French you see in Villon’s poems- all use “pang” rather than panno or pain for bread, “ving” (“buon ving”) for wine instead of vino or vin. My contemporary cousins seem to speak Italian and French– the second is what I have used to communicate with them.

The old ones, some who have been in Massachusetts and Vermont for two generations longer than my own immediate line, were good stone masons and brilliant bird-eating poverty cooks, but unlike the rowdy venturesome Scots on my mother’s side they tended to stay in their Alpine valleys, where I suspect they have been since the glaciers receded. If they don’t have that odd Mongol gene that some Lombards carry I suspect this is our most famous ancestor. 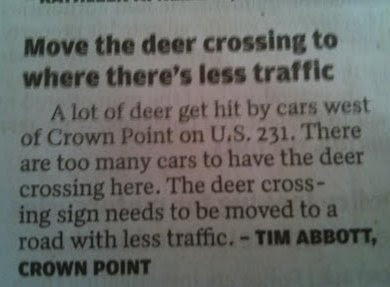 A month or two ago David Zincavage, who is both an old friend and a sort of dog relative (his Uhlan is Ataika’s nephew) emailed me asking if I knew anything about my mother’s family, the McCabes.

In fact I did, but mostly family folklore; that though they came to the New World (the Canadian Maritimes) through Ireland, and though many had been involved with the rebellions of the 1770’s, they were in fact a military family of Scots mercenaries, “gallowglasses”, in service to various Irish kings and nobles. That in addition to being a seriously combative clan– in the words of the Ezra Pound poem on Bertrans de Born, great “stirrers up of strife”– they conspired with other such English- Irish troublemakers such like the Duanes and the Loveless (Lovelace, Lawless) family, and intermarried with them (often in France, fleeing English pursuit); or, after 1800, in Canada. One Duane was also expelled from Calcutta, was probably born in Newfoundland whence other ancestors came but lied about it, and was a friend of Thomas Paine’s. My maternal great grandmother was a Lawless.

All oral folklore. All, I have found, true. For years I never thought about it or looked into it (difficult pre- Internet anyway), but David hooked me*. A serious salmon fisherman, he said: “Do you know why they have three salmon on their coat of arms?” 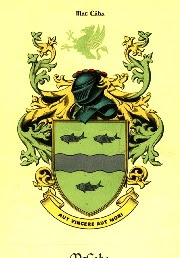 As you can see, they do, and I have no idea why. Suggestions encouraged.

The other things I have found is that they originally hail from one of the Western Isles (Aran?), and that their combativeness is probably real. Their motto is “Aut Vincere Aut Mori”: “Conquer or die!”

* I don’t see why Reid has any monopoly on bad puns.

Back in the summer we were up doing some fieldwork on a project in eastern Oregon. We drove past the airport in Ontario several times and I noticed a couple of Cold War-era military jets from the road. Later I got to stop by and saw there was a small collection of these around the hangers.

The aiplane above was totally new for me. It is a F5D Skylancer a fighter aircraft developed for the US Navy in the mid-1950s, that in this case was used as a test aircraft by NASA. 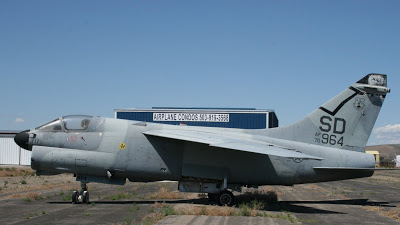 There was also this USAF A-7D. The markings showed that its last stop was with the South Dakota Air National Guard. 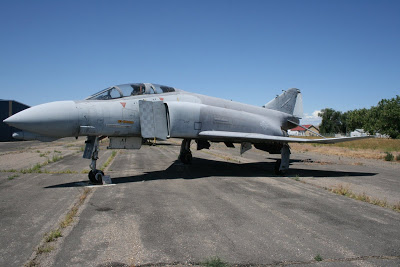 This is a very tired looking F-4 that had last been with the Michigan Air National Guard. I’m surprised this plane hadn’t been converted to a target drone. 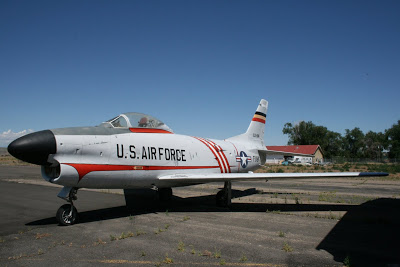 This is an F-86D with the distinctive black radome on its nose. You don’t see very many of these though you do see plenty of the other F-86 variants 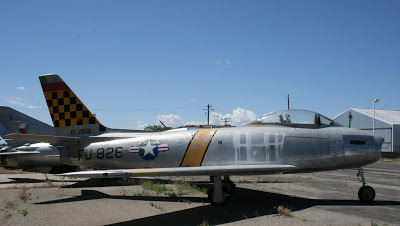 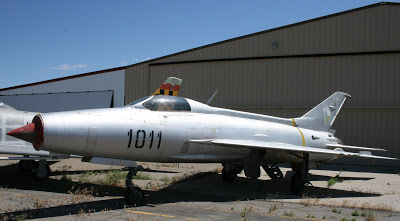 Next to it was this MiG-21. It looked as though it had been flown recently and interestingly enough still had its gun sight installed. 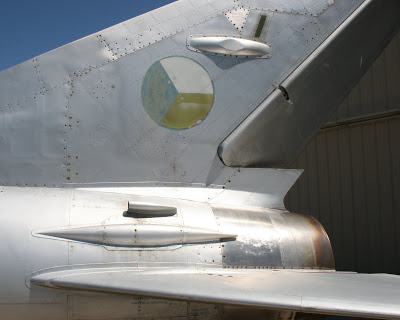 This distinctive roundel showed that the MiG was Czech. 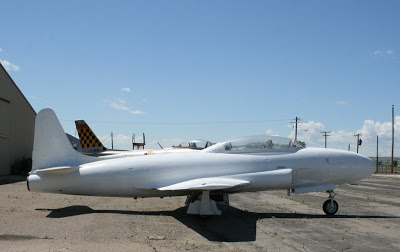 There were two of these T-33s. This is a two-seater jet trainer developed in the late 1940s from the F-80, the USAF’s first operational jet fighter. 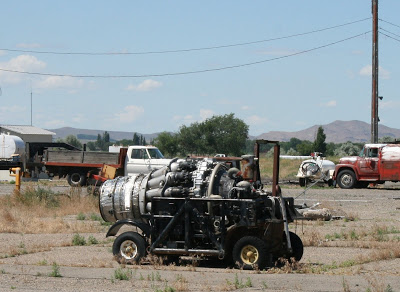 This J33 engine must be a spare for the T-33s. It’s a member of the first generation of US engines based on the British Whittle design. With its centrifugal compressor, it looks oddly stubby contrasted with the axial flow engines we are used to seeing today. 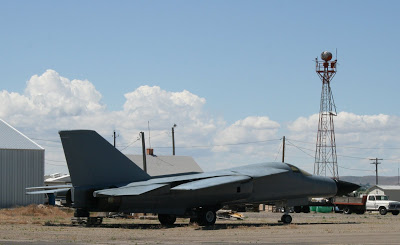 Finally I was a little surprised to see this FB-111 Aardvark. A fair number of enthusiasts like to keep and fly fighter jets, but few seem to want to take on the expense of these larger multi-engine aircraft.

With proud father and GREAT “Aunt” Martha Clark and with Libby: 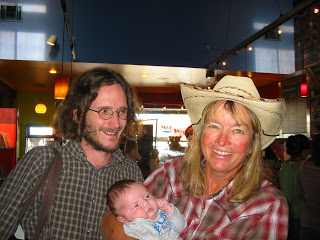 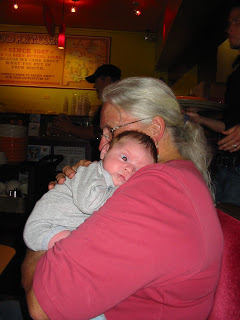 “Qualifications for a Traveller. – If you have health, a great craving for adventure, at least a moderate fortune, and can set your head on a definite object, which old travellers do not think impracticable, then – travel by all means. If, in addition to these qualifications, you have scientific taste and knowledge, I believe that no career, in time of peace, can offer to you more advantages than that of a traveller. If you have not independent means, you may still turn travelling to excellent account; for experience shows that it often leads to promotion, nay, some men support themselves by travel. They explore pasture land in Australia, they hunt for ivory in Africa, they collect specimens of natural history for sale, or they wander as artists. ” – Sir Francis Galton

“I get satisfaction of three kinds. One is creating something, one is being paid for it, and one is the feeling that I haven’t been just sitting on my ass all afternoon.” — William F Buckley, Jr.

I have not been blogging because I have been working getting my two books up to speed, so forgive my brevity! 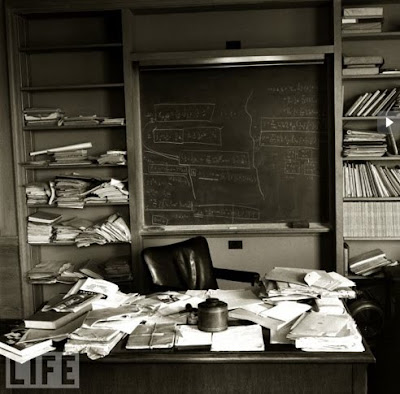 I am posting this picture as a public service for anyone (like me) who catches grief about having a messy office. 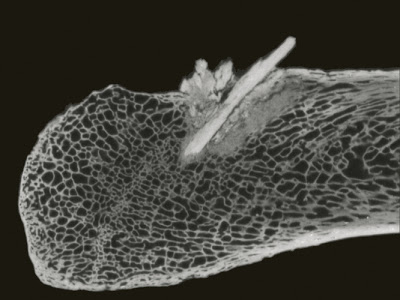 Yesterday afternoon, NPR had this interesting story on the reanalysis of material from a mastodon kill site in Washington state that was originally excavated in the late 1970s. The reanalysis was conducted by the Center for the Study of the First Americans at Texas A&M and they found that the kill dates to 13,800 years ago, making it a pre-Clovis site. Also, they found what appeared to be the tip of a projectile point stuck in one of the ribs. A CT-scan of the rib and point tip is shown above.

The projectile point turned out to be made of bone, and DNA analysis of the bone tip showed that it was mastodon bone. This is particularly interesting in that now as more and more pre-Clovis material comes to light, we need to understand what tool types these people used. While they aren’t unknown, bone projectile points don’t appear to be a major component of later Paleoindian toolkits.