In a comment to Mark in the post on Lauren below, Constant Commenter and dog- in- law Lane Batot of North Carolina explains that he does not have a computer, but that “Mister Bodio recently got a whole bunch of photos of the pups from me that he perhaps can scan(?) and post(?)”

Asked and done. Bouriy and Yantar (Russian for fawn and amber), his “yeller dogs”, were bred in Virginia by Vladimir Beregovoy, cynologist extraordinaire and translator of Notes of an East Siberian Hunter, out of his Urtak and Bibigul; Mark McBride’s Nura is their aunt, Taik their great aunt, and I refuse to do any more genealogy, though they have relatives everywhere from here to Pakistan. Lane adds: ” Those photos are of the pups at 3-4 months old–they are 5 months old now, adult teeth coming in, and my, have they grown!” A few of many photos below, including one confronting a cement chicken (“… at Vladimir’s, these things were more fun to chase!”). 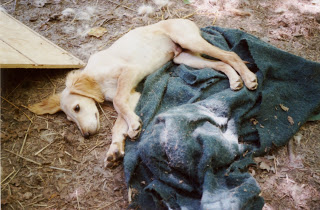 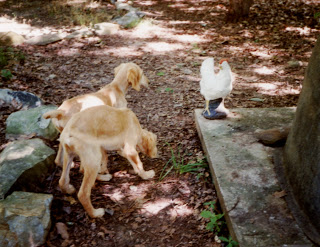 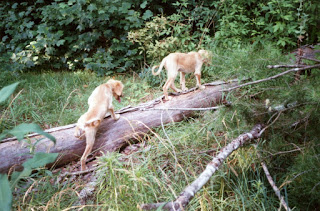 We must hope that SOMEBODY got photos of Lane’s latest adventure: doing his Sasquatch impression for his friend Jane Goodall and God knows who else when she flew him out to LA last week for the centennial celebration of Edgar Rice Burroughs’ Tarzan. “My Bigfoot impersonation tales seemed to be most popular with those folks! …and how bizarre and unbelievable (to me) to fly across a continent for the weekend, hob- nob with celebrities at a posh event in L. A., fly all the way back, and the next day be out in the woods with six dogs, little clothing other than my spear and my knife, listening to some of those planes flying high overhead!” More to come, including an old photo of Lane; we WILL have “official” links to the Goodall gala, but maybe someone will send photos as well.

9 thoughts on “Bouriy and Yantar”