The BIG bird. Moro correctly guessed — no, knew- what the huge black cutout a few posts ago represented: the the biggest bird that ever flew, and one of the biggest flying creatures– only Azdarchid pterosaurs were larger.

As far as I know (Therese? Darren?), its taxonomy seems a bit vague, and its habits disputed. The facts are that it lived in a hotter, dryer plains habitat in the late Miocene of southern South America, (6 million YA); that it had a hooked beak rather longer in proportion to its head than other raptors (as Darren said, a perfectly good word referring to a particular group BEFORE the unnaturally naked predators of Jurassic Park); and that it was HUGE. Its wingspread was more like a small plane’s than a bird’s: 23- 25 feet. It may have weighed only a little less than an ostrich, or even as much. It was too heavy for sustained flapping, but was built to soar in the perpetual winds blowing off the Andes. Its primary flight feathers were over a yard and a half long! (The points of attachment were preserved and indicated a shaft about an inch thick).

Many reconstructions show the bird as a giant vulture but that is dubious; it was as likely a predator as a scavenger, and there was plenty of food around. The logic for a vulturine appearance is something like “New World vultures include condors. Condors are rather like Teratorns. Argentavis may be related to Teratorns…”

I don’t buy it. The bird has some stork affinities as do New  World vultures (unrelated to Old World ones or other birds of prey). But it is different, with its huge beak and strong legs and ridiculous size. I like more ambiguous ones, like this wonderful portrait by Wandering Albatross at Deviant Art… it looks like something unique that might have vultures as relatives. 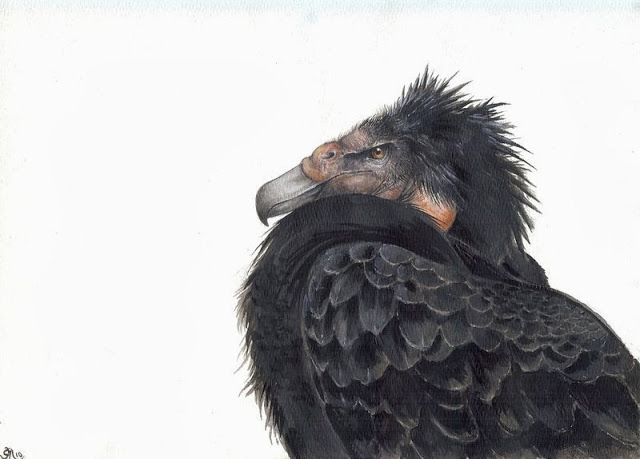 There is a good informal account by paleontologist Bjorn Kurten in his 1991 Innocent Assassins.  Not Exactly Rocket Science discusses how it flew. I would love to hear more from anyone who is more up- to- date…