Skip to content
Shrike by Daoud Marrash in Sudan in the fifties; book by British Falconers’ Club; Tiffany tiger paperweight from Betsy Huntington 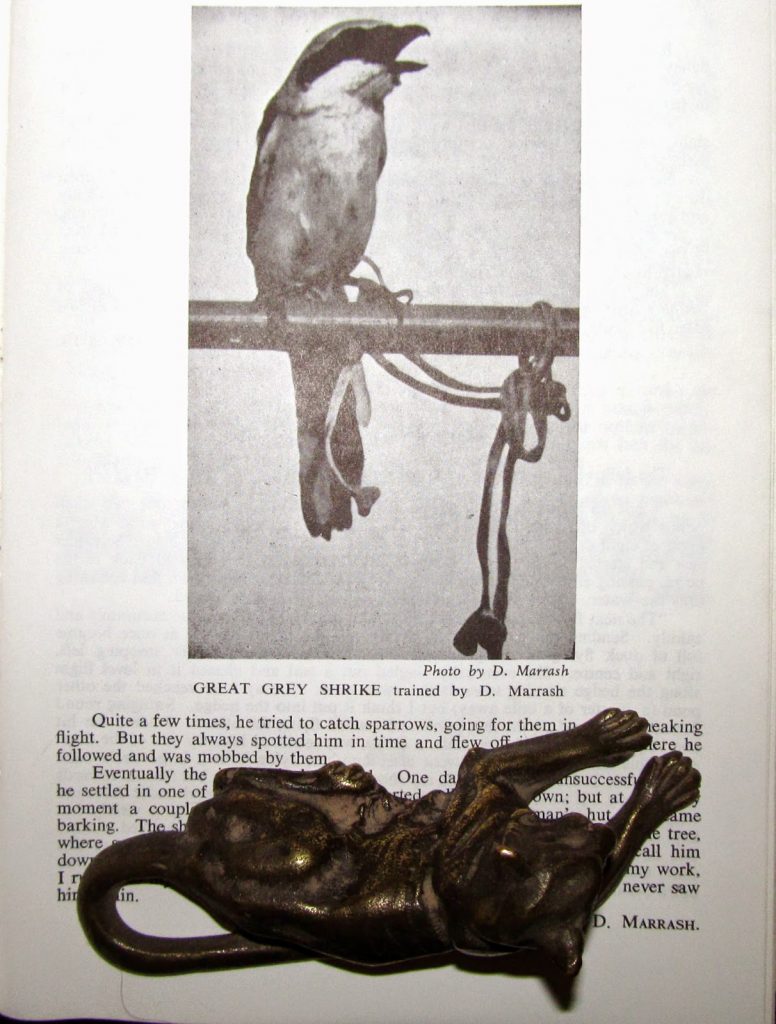 Shrikes are used to attract Sparrowhawks in Turkish falconry, were trained by Tom Cade in Alaska when he was working on his PhD, were used in the courts of France and are flown from bicycles at sparrows in Beijing. But Matt Mullenix is the only (almost) contemporary I know who has worked with a few to rehab them, and writes this. Yes, he is still on the masthead, but with a new company added to his already busy life, we don’t get enough of him! Take it away, Matt:

“I actually made an effort with the USFWS (then with pretty good insider connection in a friend in a high place to get the Lanidae included in the list of birds legal for falconry when they were first discussing opening up most of the hawks, falcons and owls.  We were not successful because it would have required an act of congress, literally.

“But they certainly are suitable for falconry and as I learned in my research they were indeed working members of several countries’ royal mews.

“We have two species in the US (Loggerhead down here and the larger Northern in the upper parts of the US).  Both are voracious and regular eaters of birds.  No less an observer than Harry McElroy says that in his area, the wild shrike is the preeminent, long-distance pursuit hunter of passerines; and this is a guy who specializes in flying Aplomados!

“I conducted an informal but pretty serious shrike breeding survey when I moved to Baton Rouge and kept at it for about 5 years.  I counted and watched dozens of pairs raise and fledge young.  Most pairs caught and ate birds, some as large as cardinals, in addition to mice, rats, insects and lizards.  The young once fledged were particularly bold and would regularly pound into ground-feeding mourning doves and meadowlarks, although I never saw one subdue a bird that large; clearly they were game to try.

“Given the timing of the breeding season here, which coincides with the return of migrant warblers, it is not usual to see little yellow-feathered carcasses on barbed wire in late Feb and March around nesting sites.

“I’ve seen rehab birds (raised fledglings) follow me around the yard at a wildlife facility and attack anoles I flushed for them under boards.  They flew in a little pack of siblings and I think such a pack would be death on house sparrows…. shoot–maybe death on anything!”

Below, Turkestan Shrike (Lanius phoenicuroides I think)  in Kazakhstan, by Andrey Kovalenko, dog- in- law, ace photographer, and ornithologist. 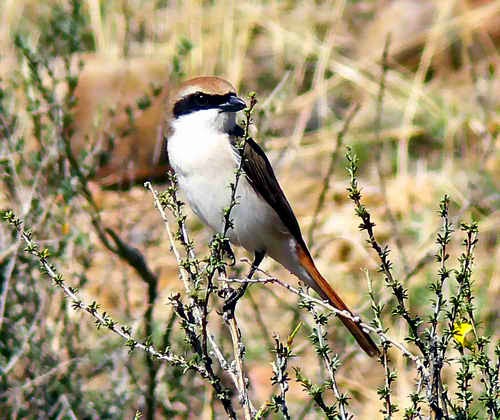 3 thoughts on “Shrikes in falconry: Guest post by Matt”